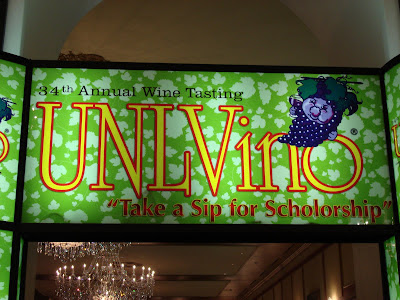 Back in February, I attended the Boston Wine Expo and my experience was a bit of a mixed bag. So, I was curious how the 34th Annual UNLVino Grand Tasting event would compare. They were similar types of tastings, both with well over 1000 wines available for tasting. Would I have to fight the crowds in Vegas like I did in Boston? Would Vegas be a much gaudier affair?

The Grand Tasting was held on Saturday, April 5, at the Paris Las Vegas Hotel. Though the public tasting did not start until 2pm, the trade hours started at 12pm. With my press pass I was able to enter during the trade hours, when it should be quieter and easier to get to all of the tasting tables. Curiously, there was a long line of people waiting to enter during the trade hours. Based on my observations and hearing some people in line, it appears they may have permitted certain groups an early entry into the Grand Tasting, though they were not members of the trade. This is different from my experience at the Boston Wine Expo.

The set-up of the tasting room provided plenty of space between the different rows of tables, far more space than is usually provided at the Boston Wine Expo. So, even when the crowds showed up later in the afternoon, the expo did not seem as crowded as the Boston expo gets. You actually could still access most of the tables with no more than a minimal wait. That certainly made the UNLVino expo more appealing.

Food at the Boston expo is generally limited to the vendors on either sides of the hall. But there was plentiful food at the UNLVino expo. There were a few large tables with quite a diverse selection of foods and not just cheese and crackers. Plus, there were additional vendors at different tables giving away food, including sushi. This certainly would help people counteract some of the effects of all the wine that was available.

The selection of available wines was generally comparable to that of the Boston Wine Expo, except that the UNLVino may have had more high end wines available. At the Boston Expo, many of those such wines are reserved for the Grand Cru Wine Tasting Lounge. As UNLVino does not have such a separate tasting for more expensive wines, then there is more of a mix in their Grand Tasting. Though, probably the majority of wines available were $25 or less.

The UNLVino did have a small auction as well, in a room off of the main tasting hall. They only had about forty items and used both a silent and voice auction to sell the items. Nothing really appealed to me so I never bid on anything and did not attend the voice auction. Some of the items were local so they would not have done me much good back in Massachusetts. Nearly all of the wines up for auction were from California and none intrigued me enough for a bid.

Though the Boston Wine Expo generally seems a more causal event, there were plenty of attendees at UNLVino who were dressed as if they were going out to a high end night club. And like the Boston Wine Expo, there seemed to be more women present than men.

My friends, as did I, enjoyed themselves very much at the UNLVino tasting. Over the next couple weeks, I will post some tasting notes about the wines at the tasting which most impressed me. I certainly did not try all of the available wines, but I did try a fair share of different wines. And I certainly will head back to Vegas next year for the 35th edition of UNLVino. I would definitely recommend UNLVino to any wine lover who will happen to be in Vegas next April.

I think the Boston Wine Expo could take some suggestions from UNLVino to make their grand tasting a better event.
Posted by Richard Auffrey at 5:30 PM

Thanks for the overview, very informative. Any idea how they stack up against the Miami Wine and Food Festival?

Hi and thanks for your comment. Sorry, I have never been to the Miami event so don't know how it would compare.

Thanks for the great post of the event. It is a fave of locals every year.

We'll be linking to this in one of our future newsletters. I apprecaite not only those who come visit Las Vegas, but especially those of you who come and enjoy some of the great "locals" events we have here.

Welcome Ted to my blog. I very much enjoyed UNLVino and look forward to attending again next year.