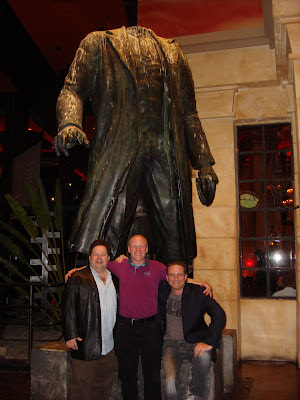 While in Vegas, I stayed at the Mandalay Bay Hotel, which was an excellent choice. The hotel has numerous restaurants and bars, including Red Square, a Russian restaurant and bar with an extensive vodka selection. Above, you can see the headless statue of Lenin that stands just outside the restaurant. The head is inside the restaurant, in their "vodka vault."

The interior of the restaurant is decorated with Imperial Russian decor and there are comfortable red velvet banquettes. Atop the long bar are a couple flat blocks of ice where your vodka shots can sit and remain chilled. There is also the vodka vault, a very cool room where you can drink vodka and party.

I actually made three stops to Red Square while I was in Vegas. The first time was on Thursday, when I stopped by for a drink. I sat at the ice bar and perused their vodka menu, which has over 200 choices from all over the world. There are few vodkas they do not carry. They do serve vodka flights as well, generally four different shots in a range of price points. I got one of their top selections, which included a shot of one of my favorite vodkas, Stoli Elit. I liked the fact the shot glasses were atop the ice and could stay chilled.

The next day, my friends and I decided to rent out the vodka vault. To enter the vault, you must buy a bottle of vodka. Bottles start at $200 and go up from there. Yes, this is very pricey, but probably no different than bottle service at any of the other clubs in Vegas. You are also getting more than just the bottle, you are actually renting the room as well. I chose a bottle of Chopin Vodka, a Polish potato vodka that is also one of my favorites. Prior to entering the vault, you also get to don fur and Russian coats and hats. This helps as the room is only about 20 degrees Fahrenheit. We had plenty of fun that evening, though we did not finish the bottle. I should note that we received a liter bottle of Chopin, not the usual 750ml bottle you buy at the liquor store. We were allowed to take the bottle back to the hotel with us (which we later finished).

On Sunday, our final day in Vegas, we did not have any dinner reservations. Our flight was not until late in the evening so we did have time for dinner and decided on Red Square. I was particularly pleased as I had seen a foie gras dish on their menu that really intrigued me. We sat in one of the red velvet banquettes. The menu has both appetizers and entrees, most with a Russian flair to them. We decided to start with a few appetizers first, as not everyone was really hungry. A side effect of the large dinners we previously ate.

Plus we had more vodka. I tried a pepper infused vodka that definitely had a nice bite to it. It would have been the perfect vodka for making a Bloody Mary. We also got another flight of vodka and this time in came in a large, red block of ice, or some type of ice substitute. The shot glasses fit in slots atop the block. It definitely kept the vodka ice cold.

For our initial appetizers, we shared some fried calamari, smothered blini, and a foie gras dish. I think we had a carpaccio dish as well. Guess all that vodka did not help my memory. It was all very good but it was the foie gras that drew me to Red Square. The foie gras was accompanied by bacon (did I say BACON!), French toast, and Granny Smith apples slices. For me, foie and apple are a perfect pairing. And this dish was near perfect. Silky, buttery foie. Crisp bacon. Eggy French toast. Near perfect. Except that the apple slices were too large, too thick, and they somewhat overpowered the rest of the ingredients.

After that first round, we decided just to get more appetizers, though now just for each of us. I was the hungriest of the crew so I ordered a salad, lobster bisque and another foie. The salad came with basically a fried piece of goat cheese, absolutely delicious with its cripsy exterior and creamy interior. All of the greens were very fresh and the dressing was also very good. The bisque was another winner, with an excellent flavor. It was a great consistency, being neither too creamy or too thin. It probably could have used more lobster pieces in the bisque but you could not improve on the flavor. And then the foie.

When I ordered the foie this time, I did ask for the apples to be sliced thin, explaining how I felt the apple pieces had been too thick before. They gladly made the change for my dish and later stated that maybe the chef would change the dish in the future and use thinner sliced apples. When my foie arrived, the apples were very thinly sliced and seemed to have some cinnamon on them too. An added bonus. And this time, the dish was perfect. Everything fit together so well, just the right blend of flavors and textures. Absolutely superb. What a fitting ending to my Vegas vacation.

Service was exceptional during all of my visits. The servers were personable, attentive and courteous. Not a mistep by anyone. The food is delicious, plentiful and of high quality. Prices are reasonable for what you receive. I would highly recommend Red Square, both as a restaurant and bar. I will definitely return there on my next visit to Vegas!