Almost every week I seem to read about some huge wine corporation buying up another vineyard or winery. It seems tougher and tougher for the small artisan producers. One of my worries is that the huge corporations may only produce wine that caters to the lowest common denominator, creating mass-produced, characterless wine.

Terlato Wines International is a huge wine marketing company, representing one out of every eight bottles of wine costing over $14. They represent some high quality brands though they also represent Santa Margherita Pinot Grigio, a popular but more mass-produced wine. Though the high quality brands are definitely the majority of their portfolio.

Terlato is owned and run by Anthony Terlato and his sons, William and John. Anthony's career in wine began over 50 years ago in his own father's wine store in Chicago. Anthony eventually got into the wine importing business, beginning with Italian wines. His Paterno Imports became a very important Italian wine importer. During the 1980s, he expanded his portfolio to cover a number of other wine regions, including California, Oregon, France, Australia, Greece, Chile, South Africa and New Zealand.

Then in 1996, the Terlatos entered the wine making business with the purchase of Rutherford Hill Winery in Napa Valley. This was but the first of their wine making ventures which now include ownership of Chimney Rock Winery and Terlato Family Vineyards as well as majority interests in Sanford Winery and Alderbrook Vineyards. They also have interests in M. Chapoutier (Rhône Valley) plus a joint venture in Australia with M. Chapoutier.

What type of wine would their namesake winery, Terlato Family Vineyards, produce? Based on their website, they seek to produce high quality wine. They want to make a limited production of handcrafted wines with authentic expressions of their region. These wines would have to meet very high standards. That sure sounds promising, but would the wines live up to the hype? I would soon learn the answer.

Last week, I attended a special wine tasting with several of the Terlato wines, as well as a couple from other wineries they own. OurGlass Wine Co. of Saugus hosted Doug Fletcher (pictured below) who is the Vice President of winemaking for Terlato. I very much looked forward to the tasting as I always enjoy meeting winemakers. They are obviously so vital to the process and you can learn much about the wine from talking to them. 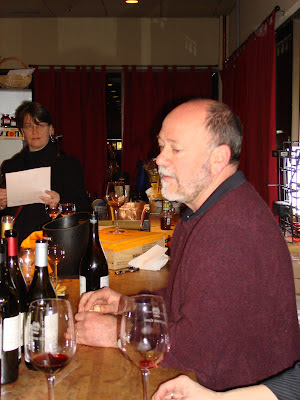 The line-up of wines, shown below, included four Terlato wines, one from Domaine Terlato-Chapoutier, one from Chimney Rock and one from Sanford. There was a good crowd of people who showed up for the tasting. And everyone seemed to enjoy the tasting. 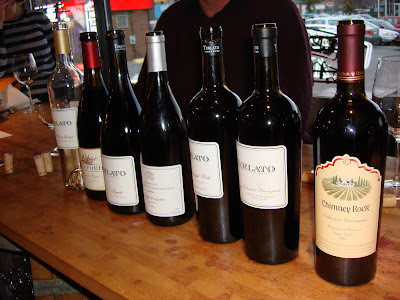 Who is Doug Fletcher? He has worked with Stags Leap District fruit for more than two decades and in the process has become a leader in growing and crafting wines from the District. Fletcher began his career as a winemaker in the mid 1970s. He arrived at Chimney Rock in 1987 and oversaw the replanting of the original estate vineyard, as well as 65 acres of additional plantings done under the Terlato Family’s leadership in 2001. In 2006, Fletcher was appointed Vice President of Winemaking for the Terlato Wine Group. He oversees all aspects of winemaking at the Terlato properties. Fletcher also serves as a senior consultant to the Terlato Family's joint ventures throughout the world.

Doug was an engaging and personable speaker, with a clear passion for winemaking. He was very informative and answered many questions about the wines. It was obvious that he cares about the quality of the wines he produces. He seeks to make the best wine that he can. And he certainly made a good spokesman for Terlato.

The wine has an alcohol content of 13.8% and is made from 100% Pinot Grigio. It is whole cluster pressed in an effort to prevent the wine from acquiring any bitterness. They actually use a Champagne-style press to gently obtain the juice. The wine is 80% tank fermented and 20% barrel fermented in neutral French oak, old Chardonnay barrels. The wine does not undergo malolactic fermentation though they do stir the lees. It is also aged four months in tanks and neutral barrels. Just over 6,000 cases of this wine were made.

I generally do not care for many Pinot Grigios because far too many are rather bland and one-dimensional. But the Terlato Pinot Grigio was nothing like that. It was a pale yellow in color with an enticing nose of citrus fruit. It was a crisp, refreshing wine with lively fruit flavors of melon and grapefruit. It had a decently long finish and plenty of character. This was a Pinot Grigio that I very much enjoyed. And if Terlato made their Pinot Grigio this good, then it boded well for the rest of their wines.

Now, the Terlato Pinot Grigio is a bit more expensive than most others. That is partially a factor of the higher price they must pay for grapes from the Russian River Valley. But, for the high quality of the wine, I definitely think it is worth the price.

The next Terlato wine I tried was their 2004 Terlato Family Vineyards Syrah ($37.99). The grapes for this wine come from Sonoma County’s Dry Creek Valley, which shares important characteristics with France’s Rhone Valley. Thus, it was thought this was the best place in California for planting Syrah. Again, they are taking great care to find the best source for their grapes.

The wine has an alcohol content of 13.8% and is made from 100% Syrah. The wine is aged for about seventeen months in 100% French oak, 30% new oak. I somewhat expected this to be a big, bold Syrah, the usual California style, but I was completely wrong. The wine had a moderate red color, not the inky purple you see in many California Syrahs. The nose has intriguing dark fruit aromas, plum and blackberry. On the palate, it definitely was a lighter style Syrah, almost like a light Pinot Noir. It had few spice notes but plenty of vibrant fruit, plum and black cherry, as well as a hint of vanilla. A very interesting wine that was carefully crafted rather than with a heavy hand. Much more Old World style and quite delicious.

Next on the Terlato list, the 2004 Terlato Family Vineyards Angel's Peak ($52.99). Terlato wanted to pay tribute to some of his favorite Bordeaux wines with a special selection of varietal blends, which led to the creation of his “Peak Series” wines. These are all Bordeaux style blends from various vineyards in Napa Valley. Angel's Peak follows the traditions and methods of the Pomerol region which is known for its fruit forward wines dominated by the Merlot grape.

This vintage is a blend of 53% Merlot and 47% Cabernet. The exact blend does vary from vintage to vintage. The wine has an alcohol content of about 14.2% and is aged in French oak, 50% new, for about 22 months. It has a medium red color with a nose of cherry and almost a chocolate aroma. The taste gives you good ripe fruit with hints of cinnamon and clove. The tannins are mild and it has a long finish. I think it definitely reminds me of a French Bordeaux.

One interesting fact about the wine is that it has a short foil on the neck of the bottle. This allows you to see the bottom of the cork and thus the name of the wine and its vintage. This is an old tradition that was once done to try to reduce fraud. Some unscrupulous vendors would place an inferior wine into a quality bottle. But, if you can easily see the cork, then you have a better chance of knowing the wine is legitimate.

The final Terlato wine I tasted was the 2005 Terlato Family Vineyards Cabernet Sauvignon ($64.99). The grapes for this wine come from the Stags Leap District, often said to be the best location in California for Cabernet Sauvignon. And it is wines from this region which bested French Bordeaux in the famous 1976 tastings.

This wine wine has an alcohol content of 13.8%. Only free run juice is used to make the wine, which is considered the best of the juice. The wine is fermented in stainless steel and then aged in French oak for about eighteen months. It also sees a year or so of bottle aging. Only about 363 cases of this wine were made so it definitely is limited production.

This wine just blew me away! It has a rich, dark red color with a stunning nose of dark berries, vanilla and chocolate. It is a full bodied wine, rich and with very supple tannins. It has a complex melange of flavors including blueberry, vanilla, black cherry, and maybe a hint of cinnamon. It is well balanced and has a delightful lingering finish. It was such a smooth wine, something that you could enjoy on its own, savoring each mouthful. This is a wine you could drink young or which could sit and age in your cellar. A superlative wine that I cannot recommend enough. It is well worth its price tag and could easily compete with Cabernets at twice the price. I made sure to pre-order some for myself.

I also got to taste a few wines from their other wineries. The first was the 2006 Sanford Pinot Noir ($34.99) from the Santa Rita Hills. It is a blend from their estate vineyard, La Rinconada, and the historic Sanford and Benedict Vineyard next door. It has an alcohol content of 14.5% and is made from 100% Pinot Noir. The wine was aged for about ten months in French oak, 30% new.

This wine was very light red in color with a nose of cinnamon and spice. On the palate, the cinnamon combined with clove, vanilla and subtle berry flavors. The tannins were mild and smooth. This was very much a Burgundian-style Pinot. It is a complex wine with pleasant subtleties. It definitely appealed to me, especially as it is unlike many other Pinots currently coming from California.

The 2006 Domaine Terlato-Chapoutier Shiraz-Viognier ($22.99) is from Australia, the winery being in Victoria, and was intended to be made in the Australian manner. The wine is moderately red in color with a very aromatic, perfumy nose which is due to the Viognier. This is a big, bold Syrah with plenty of spice. I am generally not a fan of Viognier as I dislike its perfumy aspect. So, I was not enthralled by this wine, though it is more a matter of personal preference. Those that like Viognier will likely enjoy this wine.

Finally, I tasted the 2005 Chimney Rock Cabernet Sauvignon ($57.99). Like the previous Terlato Cabernet, the grapes for this wine also come from the Stags Leap District. This wine is a blend of Cabernet Sauvignon with a bit of Merlot. It has an alcohol content of 14.2% and is fermented in stainless steel. It then spends about eighteen months in French oak, 50% new.

I found the wine to have a medium red color, though on the lighter side. Coming after the superb Terlato Cabernet, it might not have shown the best to me. Though I did enjoy this wine, it was not as impressive as the Terlato. The Chimney Rock seemed a bit tarter and spicier than the Terlato. It still possesses good fruit and spice flavors, nice complexity and structure, but overall I preferred the Terlato. Then it could just be a matter of personal preference too. It is not a wine that will disappoint, but I did prefer the Terlato.

So, the Terlato philosophy of seeking to make high quality wines is more than mere rhetoric. They are crafting some exceptional wines of character. Their wines are different from many of the other wines coming out of California. Doug Fletcher is certainly doing an excellent job of helping to ensure the quality of the Terlato wines. These are wines I heartily recommend.

Posted by Richard Auffrey at 6:05 AM