Justin Vineyards and Winery is an much acclaimed winery located in the Paso Robles region of California's Central Coast. It was established in 1981 by Justin and Deborah Baldwin. They chose to concentrate on Bordeaux-style blends and single varietals. Their vineyards total about 160 acres and they do source some grapes from other vineyards in Paso Robles. I have had a number of their wines in their past and I am usually very pleased with them. So, when I had the chance to taste a couple more, I made sure to taste them. 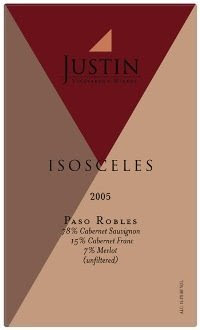 Justin Winery states that their "Isoceles" is their "soul." The Isoceles is a Bordeaux style blend made with every effort to creating a superb wine. I got to taste the 2005 Isoceles (about $62), which had just been bottled in December 2007 and which was only just coming on the market for sale.

The Isoceles was a very dark red, almost purple, in color. It had an intriguing nose of plum, blackberry, vanilla and spice. It was a full bodied wine with a complex melange of flavors, including all that I smelled plus more, including blueberry, black cherry and some leather notes. It was well structured and had a deliciously smooth taste and a lingering finish that you did not want to end. The tannins almost seem nonexistent as they are so well balanced with everything else. Just an amazing wine that will only improve with age, though you certainly would greatly enjoy it even now. This is the type of wine that is well worth the splurge. I will definitely be seeking out a couple bottles for myself. 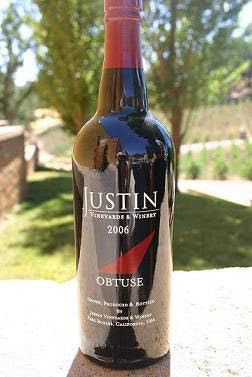 I also tried the 2006 Justin Obtuse, their port-like dessert wine. This wine is made from 100% Cabernet Sauvignon. The grapes were all hard harvested and the wine was fortified with a 170 proof un-aged grape brandy. The wine aged for about ten months in neutral French oak barrels. It was neither fined nor filtered and has an alcohol content of 18%.

The wine had a light red color and an interesting nose of vibrant fruit, especialy cherry and raspberry. On the palate, it was lush wit plenty of red fruit flavors and a touch of cocoa. It was mildly sweet without being cloying. The sweetness thus did not detract from the myriad of flavors in the wine. This dessert wine would probably go well with chocolate desserts, or even on its own. Its rich flavors can be savored after dinner. I am a big fan of dessert wines made from red grapes and the Obtuse certainly is an excellent example of what such a dessert wine can show. Another definite recommendation.
Posted by Richard Auffrey at 6:15 AM