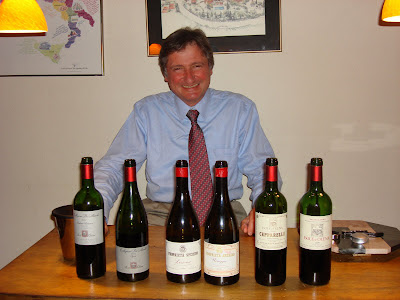 Last Wednesday, I had the distinct pleasure of meeting Paolo De Marchi, a famed Tuscan wine maker. Eric Olson, the owner of Salem Wine Imports, is an old friend of Paolo and hosted a tasting of Paolo's wines at his store. Paolo's wines are locally distributed by Martignetti Companies.

First, let me say that Paolo was such a nice person; humble, personable, down-to-earth and very knowledgeable. And he is extremely passionate about his wines. He definitely impressed me with his personality as well as his wines. It was also interesting to learn that he was good friends with Christoph Künzli, the winemaker of Le Piane who I met last February.

Paolo's winery is named Isole e Olena, which is taken from the two separate vineyard blocks of Isole and Olena. Paolo has dedicated much time researching and testing different viticultural techniques as well as various Sangiovese clones. He was also a pioneer in introducing foreign grapes such as Chardonnay, Cabernet Sauvignon and Syrah.

In Tuscany, a number of producers were adding Cabernet Sauvignon or Merlot to their Chianti Classico Syrah to give it more color, and to give it a more international flavor. At that time, Paolo considered using Syrah to add some color and depth to his Chianti Classico. He felt that Cabernet could overwhelm the Sangiovese and he was not concerned about appealing to the international flavor. But in the end, he decided not to add any Syrah. He felt the solution instead lay in carefully finding the right Sangiovese.

To Paolo, he wanted his wines to reflect Tuscany, and not some international flavor profile that could come from almost anywhere. Thus, the key was Sangiovese, finding the best grapes, carefully working in the vineyards. For Paolo, the grapes and vineyard became paramount. What occurred after the grapes were picked was much less important. Based on the wines I tasted, Paolo certainly has proven to me that he knows how to create great wines.

Paolo has two labels, Isole e Olena for his Sangiovese based wines and Collezione De Marchi for his more international grapes like Chardonnay and Syrah. As a special treat, we also got to taste some wine from Paolo's son' label, Proprieta Sperino, which are Nebbiolo based wines from the Piedmont region.

This Chianti was a light red in color with a subdued cherry nose and a touch of herbal notes. On the palate, it was smooth and restrained with bright cherry flavors, a touch of earthiness and mild herbal notes. It had a decently long finish and was quite delicious. It may be a more subtle and elegant wine that you would expect, especially if you are used to more international style wines that are more fruit forward. I found this to be one of the best Chiantis I have tasted in some time. It would be a perfect food wine and it was a big hit at the tasting too. Many of the people I spoke to loved this wine. And at the price, this is an excellent value wine as well. This wine gets my highest recommendation.

Next up, the 2004 Isole e Olena Cepparello (about $56), which I absolutely loved. "Cepparello" is the name of a creek, which is now dry. The wine is made of 100% Sangiovese and has an alcohol content of 14%. Only the best Sangiovese grapes, from several different vineyards, are used for this wine. The DOC rules used to prohibit Chianti Classico from being made solely from Sangiovese. So this wine had to become something else, and thus became Cepparello. Though the DOC rules have since changed, it seems unlikely Paolo will change the Cepparello as it has taken on its own fame. The Cepparello spends about eighteen months aging in French oak, one-third new oak.

This wine had a medium red color with an alluring nose of cherry and spice. The wine then seduces your palate with its rich, lush flavors of vibrant fruit, spice, and licorice. It is incredibly smooth, with supple tannins, and is also well balanced with a lingering, hedonistic finish. Lots of subtle complexity in this wine, which shows much elegance and style. A superb wine that thoroughly impressed me and tantalized my palate. This is a WOW wine! I understand now why the Cepparello has received so much positive press. Even at its price, it is still a value as it is easily is worth twice the price. This wine also gets my highest recommendation and I made sure to buy some of it.

We then moved on to his son's winery, Proprietà Sperino in the Piedmont region. That is where Paolo's family originated. The first wine we tasted from this winery was the 2004 Proprietà Sperino Uvaggio (about $25). "Uvaggio" in Italian means a blend of grapes, generally done before fermentation as opposed to a "Vinaggio," a blend of already made wines. This wine is a blend of 65% Nebbilo, 20% Vespolina, and 15% Croatina. It has an alcohol content of 12.5% and is fermented in open oak vats. It is also is aged for a short time in French oak, none which is new.

The Uvaggio has a medium red color with a delightful nose of strawberry and cherry. On the palate, this was an interesting wine with those same strawberry and cherry flavors combined with only a touch of spice notes. The mild tannins made for a smooth, easy drinking wine. There was also some complexity in the flavors of the wine, taking beyond a simple fruity wine. It had a moderately long finish and was pleasing to the taste.

We moved on to the 2004 Proprietà Sperino Lessona comes from the village of Lessona. It is made from nearly all Nebbiolo with a little bit of Vespolina. It has an alcohol content of 13% and is fermented in open oak vats. It is also is aged for a short time in French oak, none which is new.

This wine seemed a bit lighter red than the Uvaggio. On the palate, the wine seemed a bit tart to me, with more sour cherry and raspberry flavors. There was only the barest hint of spice. The wine did have a long finish and was that same elegant style as the other wines I had already tasted. Its tartness though was not to my liking so I did not care that much for this wine. But, there were others at the tasting that preferred the Lessona to the Uvaggio, showing you that taste is largely a matter of personal preference.

It was now time to move on to the Collezione De Marchi wines. First up, the 2006 Collezione De Marchi Chardonnay (about $33). This wine has an alcohol content of 14% and has been barrel fermented. It also spends a year in oak on the lees. The wine had a light yellow color and the nose had a bit of an oaky/yeasty smell. Yet on the palate, neither of those really appeared. I had almost been expecting a typical California Chardonnay but I was wrong. The wine was more crisp than creamy. It had nice fruit flavors of apple and melon with some mineral notes as well. An elegant wine with a good, long finish. This is the type of Chardonnay I enjoy and which I would recommend.

I moved on to the 2004 Collezione De Marchi Syrah (about $52). This wine had an alcohol content of 13.5% and was aged for one year in small barrels, with about 25% new oak. This dark red wine had an intriguing nose of dark berries and spice. It was certainly a rich, muscular wine with vibrant black cherry, blackberry and ripe plum flavors. Though there were spice notes in the wine, it was not that bold spice found in some Syrahs. Even a touch of earthiness. This was a more elegant and complex Syrah. A luscious, smooth taste with a lingering finish. This reminded me more of a Rhone wine than an Australian Shiraz. It certainly did not lack in flavor yet it never overwhelmed. Another excellent wine by Paolo.

Finally, I tasted the 2001 Collezione De Marchi Cabernet Sauvignon (about $55). This wine had an alcohol content of 13.5% and was aged for two years in small barrels, with about 50% new oak. This wine was lighter in color than the Syrah and had an alluring nose of dark berries. This was also a rich, muscular wine with more blackbery and plum flavors. It had less spice than the Syrah though there were still noticeable hints of vanilla. The tannins were very smooth and this wine went down very easily. A complex and elegant wine that is sure to please.

All three of the Collezione De Marchi showed that Paolo is not trying to imitate an international style. He is forging a path of his own, making good wine and trying to let the grapes speak for themselves. These are not "in your face" wines. They all have far more elegance and subtlely. They are also likely to be different from many other wines made from these grapes that you might be used to, unless you drink more Old World style wines.

Unfortunately, Paolo did not have available for tasting his Vin Santo, considered a top Italian dessert wine, and his Rose, made from Nebbiolo. I will be sure to hunt them down though.

Overall, this was an exceptional tasting and it was such a pleasure to meet Paolo and hear him expound on his wines and wine making philosophy. I loved to see the passion in his eyes when talking about his wines. And I will definitely enjoy drinking his wines. The Chianti Classico and Cepparello impressed me the most though I also very much enjoyed most of the other wines.

If you get a chance to go to a wine tasting with the wine maker present, I strongly recommend you do so. Speak to those passionate men and women who make the wine you enjoy. Learn more about those wines directly from those responsible for crafting the wines. You won't be disappointed.

I am eating Italian food for dinner tonight. I think I will open a bottle of the Isole e Olena Chianti Classico.
Posted by Richard Auffrey at 3:14 PM

You are so lucky! Love Tuscany wines and i am sure meeting this winemaker was a lot of fun. Will you ever do or have you already done a wine tasting of wines from Umbria? They have some nice wines but you hardly ever get to read about tastings like the one u experienced with this guy.

I have tasted some wines from Umbria before, including one very recently (http://passionatefoodie.blogspot.com/search?q=umbria)

I would definitely go to an Umbria tasting if I found one in the local area.

That's a wonderful review, Richard! That reminds me, I should have picked up the Uvaggio while I was there - will need to address that.