Everything But The Squeal 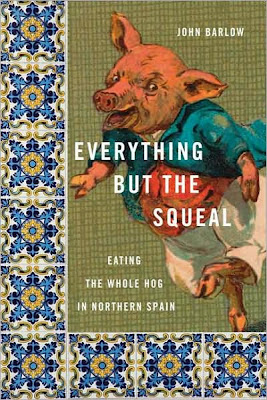 In a book about eating pig, the most memorable scene for me was the ant throwing festival. A 1000 year old festival in Galicia where people throw piles of moist dirt, filled with angry, biting ants, at each other. Are they sadistic to derive pleasure from watching their friends be bitten? Why would this festival even survive for so long?

I recently read Everything but the Squeal: Eating the Whole Hog in Northern Spain by John Barlow (Farrar, Straus and Giroux, October 2008, $25). The author details his year-long experience in the Galicia region of Spain while he attempts to eat every part of the pig, all but "the squeal." This is somewhat complicated by the fact his wife is a vegetarian. In the end, he does not fully complete his goal, though he makes a very admirable attempt.

The book is very much a travelogue of Galicia, a beautiful and fascinating region of Spain. Barlow details some of the history of the area, as well as describing many of the interesting people he encounters on his quest. As someone who loves both Spain and pork, I found some fascinating sections within this book. It can be informative and fun, as well as lead you to seek out further information about certain matters.

But, I am not fully fond of Barlow's writing style and there are some sections that drag a bit. To me, the book does not flow as smoothly as it could. So there may be parts of the book you might skim through, seeking out the more interesting spots where you will pay much more attention.

So, I give this book a qualified recommendation. There is much that is worthy within the book, but there are boring passages as well. Though the good does outweigh the bad.
Posted by Richard Auffrey at 6:00 AM