The Finger Lakes region of New York is well known for its white wines, from Rieslings to Gewurtztraminer. But can they produce good red wines too? Over the past year, I have tasted several reds from that region and so far, my experiences have led me to believe they can make some very good red wines too.

Heron Hill Winery is one of those wineries which is producing some delicious reds. Situated on a hill overlooking Keuka Lake, they have been producing wine for over 30 years. They currently produce about 20,000 cases each year, with almost 20 wine varieties. The owner of Heron Hill, John Ingle, is committed to living and farming sustainably, a worthy endeavor.

I received three samples from Heron Hill of their reds, a Blaufrankisch, Cabernet Franc and Pinot Noir. Of the three wines, I really enjoyed two of them, which I consider a very good result. Maybe I will get to visit the winery next spring when I visit the Finger Lakes region for TasteCamp 2010. 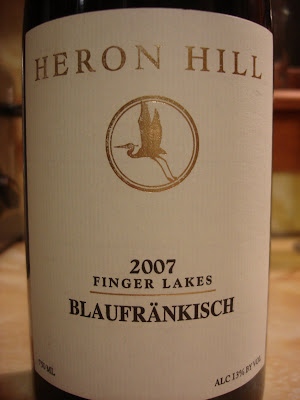 The 2007 Blaufränkisch Reserve (on sale for $32.99) is made from the Blaufränkisch grape, which literally translates as "blue grape from France." It is common in Central Europe, known also by other names such as Lemberger and Kékfrankos. This wine saw 18 months in European oak and has an alcohol content of 13%. Only 250 cases were produced.

This wine had a dark red color, with an appealing nose of black fruits and spice. I really enjoyed the taste of this wine, lush plum, blueberry, raspberry, some vanilla notes and subtle spices. It was smooth, with restrained tannins, and a lengthy and satisfying finish. A wine I could enjoy on its own or with food. It may be a bit pricey, but it is an uncommon grape and a very limited production. For something different, check out this wine. 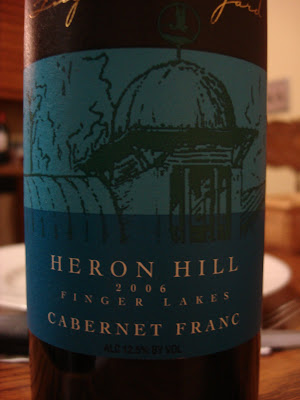 I was initially concerned about tasting the 2006 Ingle Vineyard Cabernet Franc (on sale for $14.99) because I generally dislike the majority of Cabernet Francs. That is nothing new to my readers. But there are some of these wines which I do very much enjoy. So which one would this be?

I was pleasantly surprised by this Cabernet Franc! I did not detect any green/vegetal aromas or flavors in this wine. Instead, this was a wine of dark fruit, leather, spice and earthiness. A medium-bodied wine, the tannins were moderate and the finish was long and delicious. It was like a light version of a Cabernet Sauvignon, but with some of the earthiness of a good Burgundy. It is probably best accompanied by food, though some will enjoy it on its own. I thought this was a good value at its original price of $24.99, and at its sale price of $14.99, it is an excellent value and highly recommended. 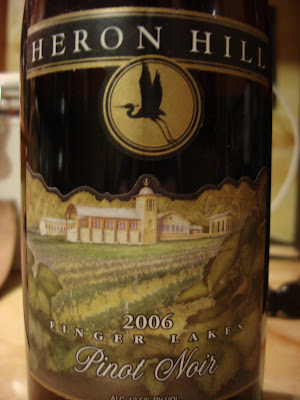 The 2006 Classic Pinot Noir (On sale for $11.99) was disappointing. It sees 12 months in the barrel and has an alcohol content of 12.5%. It has a light red color, almost seeming like a dark rose. On the palate, the oak seemed to overpower the fruit. It was very spicy, but that spice eclipsed the rest of the flavors of this wine. This is not my preferred style of Pinot.

I am interested to taste Heron Hill's future wines, especially as they have a new wine maker, Bernard Cannac. Bernard is recently of Castello di Borghese. having started at a family owned vineyard in France where he grew up. He eventually received an Enology degree from the University of Bordeaux. Hopefully, Cannac's expertise will only improve the Heron Hill wines.

So right now, with their ongoing sales, is a good time to buy some of the Heron Hill wines, especially their Cabernet Franc.
Posted by Richard Auffrey at 6:00 AM

I got the chance to try Heron Hill's Blaufrankisch and I would have to agree with your notes. For the money, I enjoy some of the older Zweigelts but overall this is a tasty wine made from a grape that I wouldn't expect to find much of in the US. I'm curious to see how it changes with the change in guard of winemakers.. hopefully Heron Hill will continue to improve upon their line of wines.

On another note, would you say that the Cab Franc was your favorite of all of the Heron Hill wines?

I would be good to see more Blaufrankish in the U.S.

Yes, the Cab Franc was definitely my favorite. And I am not usually a Cab Franc fan.

I hope the folks at Heron Hill as well as other Finger Lakes wineries, share more of their juice down here to us folks in FL.... (especially the wine whore ones) :)

I'll keep an eye out for their Cab Franc... I don't think their going to make the Blau this year :(