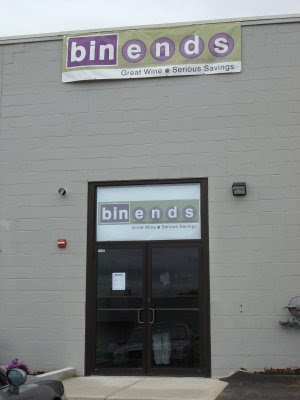 Restaurants, wine stores, food markets and other such places can undergo changes at any time. As a blogger, I think it is my advantage that I can post again and again about such places, noting any changes that occur. The usual print media, newspapers, magazines and such, often only write about a place once. They rarely revisit older places, or track the ongoing progress of a new endeavor. So, if you want updated information about a place, a blog might be your best option.
Bin Ends, a discount wine store in Braintree, opened in early May and I visited the store just a few days after their opening. I posted a positive review of the store and was impressed by its owners, the store concept, their diverse selection and the excellent prices. I felt it had much potential. Since that time, I have paid attention to their endeavors, even participating in their innovative Twitter Taste Live series.
Recently, I stopped by the store again to see how it had changed, if at all, since May. In many ways, and all positively, it was the same except that it now carries an even larger selection of wines. There is plenty of diversity and the wine prices are still excellent. I was very pleased to see that they now carry several different types of Japanese Sake as well as Beija, my favorite Cachaca. And the Beija was even discounted a few dollars off the usual retail of $30.
They had several wine bottles open for sampling, which they always do, and I tried a couple of the wines. Back in May, the owners mentioned that they would eventually get some of the Enomatic wine tasting machines. That has not happened yet though I have recently been told that they should arrive in early 2009. I even spent a little time sorting through their 50% off bin, one of my favorite parts of the store, and found an interesting Portuguese wine. In addition, I bought some 2005 Tenuta Pederanza Lambrusco “Grasparossa,” just an exceptional wine that I really love.
Bin Ends continues to be an excellent wine store and is following through on the potential I noted back in May. Their changes since May have generally been more subtle, adding more selections as well as adding more diversity. Yet all of those changes have been positive. I continue my hearty recommendation of this store.
Posted by Richard Auffrey at 6:00 AM