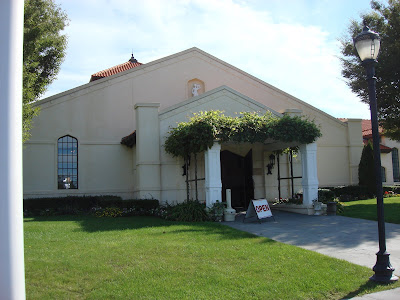 As I mentioned previously in my review of Roanoke Vineyards, I had a bit of free time to explore a few of the wineries on the North Fork of Long Island. Lenn of Lenndevours also recommended that I check out the Raphael Winery so I made that one of my destinations.
Raphael, which was established in 1996, is owned by John Petrocelli Sr. The winery concentrates on Merlot though grows other grapes as well. Their wine maker is Richard Olsen-Harbich and he is assisted by Vineyard Manager Stephen Mudd and consulting enologist Paul Pontallier, Managing Director of Chateaux Margaux.
Unlike the quaint tasting room at Roanoke Vineyards, Raphael presents a grander venue. It is an impressive building, a place which would make an excellent venue for functions. Obviously much money was invested into the building yet the most important aspect is their wine. Is it as impressive as the venue? 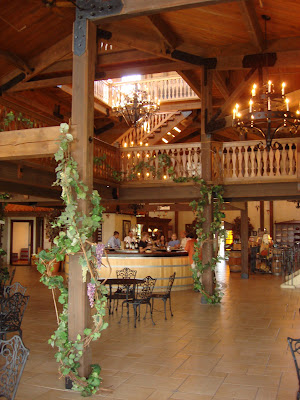 The wine tasting area, which you can see above, is a larger circular counter, that is designed to resemble a large wine barrel. They have three different tasting flights, each with three wines and priced from $6-8. They also have four library wines available for tasting, each for $5. I decided to go with the $8 tasting as well as one of the library wines.
First up, I tried the 2004 Raphael La Fontana ($21.99), a blend of 70% Merlot, 20% Cabernet Sauvignon and 10% Malbec. This wine had a rich red color and a smell of ripe dark berries. On the palate, there was ripe plum and raspberry with a touch of spice and vanilla complementing the fruit. There was also a hint of earthiness as well. The tannins were moderate and the finish was also moderately long. It presents well as a Bordeaux-style wine. I enjoyed the flavor of this wine though it would be better paired with food. At this price, it is worth buying.
Next, I tasted the 2002 Raphael First Label ($30.99), which is 97% Merlot and 3% Malbec. It was aged for 12 months in French oak. This very dark red wine had an intriguing nose of dark berries. On the palate, it was a more powerful wine, with storng blackberry and ripe plum flavors coupled with a bit of leather and vanilla. Though the tannins were evident, the wine presented an overall smoothness and balance. It had a long satisfying finish leaving you to crave more. There is plenty of complexity and this is certainly an excellent Merlot. I definitely recommend this wine and it is not overpriced as some other Long Island Merlots can be.
I was not as enamored with the 2001 Raphael First Label ($24.99), a blend of 94% Merlot and 6% Cabernet Sauvignon. It was aged for 18 months in French oak. I found the wine to have a vegetal smell which was offputting to me. And some of that greenness came through on its taste as well. The wine also seemed more tannic than the 2002. After tasting the 2002, this vintage seemed to be lacking and I did not enjoy it.
I finished up with one of their library wines, the 2006 Raphael Malbec ($39.99). This wine also did not impress me. It had a strange flavor, almost like purple rock candy. It certainly was unlike any Malbec I have ever had. If anything, it reminded me of what a Malbec might taste like if it were made by Yellow Tail.
Overall, I enjoyed half of the wines, which is still a good ratio. It is also good to see that Raphael generally has good prices for their wines. They do seem to do well with Merlot and it is worth stopping by the winery to check them out.
Posted by Richard Auffrey at 9:54 AM

I'm that you enjoyed some of Raphael's. Rich takes pride in over-delivering for the price and I agree with you that both the La Fontana and 02 First Label do that.

I've not tasted the 01 First Label in some time, but I do have a couple bottles in my cellar. May have to check in on that one. I have a lone bottle of the 00 First Label as well...wonder how that is.

Come back in a year or so and taste the 07 Malbec. I tasted it from barrel a couple months back...it's impressive.

Interesting stuff. Though the YellowTail comparison might be a bit harsh. ;-)