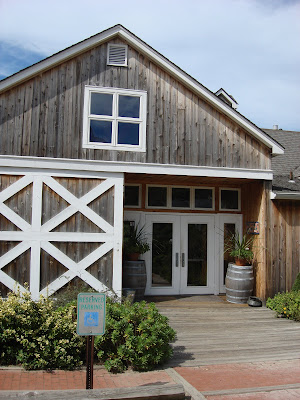 During my visit to a few of the wineries on the North Fork of Long Island, my favorite was definitely Paumanok Vineyards. Lenn of Lenndevours had recommended this winery and I am very glad he did. This is a winery I would strongly recommend as well.

Paumanok Vineyards, founded in 1983, is owned and managed by Ursula and Charles Massoud, and their three sons. Though the estate has 103 acres, the winery produces less than 9000 cases a year. They grow a variety of grapes including Chardonnay, Riesling, Sauvignon Blanc, Chenin Blanc, Merlot, Cabernet Sauvignon, Cabernet Franc and Petit Verdot.

On the day I was there, the pourer in the tasting room was Anna, a very personable and knowledgeable woman who helped to make the tasting a fun experience. She was a very good representative for the winery.

I began with the 2007 Paumanok Chenin Blanc ($28), made from 100% Chenin Blanc and which is the only Chenin Blanc made on Long Island. The wine was fermented entirely in stainless steel and has an alcohol content of 12.5%. Only 629 cases were produced. What a wine to begin my tasting! First, it had an alluring nose, such compelling fruit flavors that you just wanted to smell it for awhile before tasting it. And when I finally did taste it, the flavors fulfilled the promise of its nose. Crisp and light, there were favors of grapefruit, apple and melon. A slight tartness that only added to the allure. Well balanced, this is a wine that should please many people. Though it might seem a bit pricey, I think it is well worth the price and I bought some of it. A wine I highly recommend.

The 2007 Paumanok Sauvignon Blanc ($28) is made from 100% Sauvignon Blanc and was fermented entirely in stainless steel. It has an alcohol content of 13.9% and only 321 cases were produced. The nose of this wine was very nice, with plenty of citrus smells which also came out on my palate. There was only the merest hint of grassiness. This wine is all about the fruit. It had nice acidity and a good finish.

The 2007 Paumanok Dry Riesling ($22) is made from 100% Riesling and was fermented entirely in stainless steel. It has an alcohol content of 12.5% and only 381 cases were produced. I smelled a lot of green apple on this wine and it came out on the taste too. I also detected some lime and overall the wine was a bit tart, especially on the finish. I liked this wine though it did not really impress me.

I was a bit hesistant about the next wine, the 2004 Cabernet Franc Grand Vintage ($36), as I am usually not a fan of Cabernet Franc. Too often, it has a green/vegetal taste that turns me off. It was a light red in color and had a berry smell, but with a hint of greenness. But, when I tasted it, there was none of that vegetal flavor. Instead, there was plenty of blackberry and black cherry flavors. It had moderate tannins and a decent finish. Surprise! I actually liked this Cabernet Franc. That is why you should keep trying a grape that you may generally dislike. You never know when you will find it in a wine that you will like.

The 2004 Paumanok Assemblage ($36) is a blend of 38% Merlot, 38% Cabernet Sauvignon, 12% Cabernet Franc and 12% Petit Verdot. The wine spent 14 months in oak, 70% new and older French oak barrels and 30% older American oak barrels. It has an alcohol content of 13% and only 575 cases were produced. This wine had a moderate red color with a nice aroma of ripe red fruit. It had a lush taste of blackberry, raspberry and a hint of blueberry accompanied by touches of spice and vanilla. There was even a hint of anise. A very smooth wine with restrained tannins. A long finish and plenty of complexity. A pleasing wine.

The 2002 Merlot Grand Vintage ($36) is made of 99% Merlot with 1% Cabernet Sauvignon. The wine spent 14 months in oak, 70% new and older French oak barrels and 30% older American oak barrels. It has an alcohol content of 13% and only 346 cases were produced. It had a light red color and a bit of a muted nose. On my palate, its spicy component was most dominant, the fruit being more subdued though definitely there. It also had a bit of earthiness, especially on the finish. The tannins were mild and overall it was a smooth, silky wine. A very long satisfying finish with loads of complexity. One of the better Merlots I have ever had and reasonably priced for what you get.

I also had the fortunate opportunity to try a few of their Library wines. And they were exceptionally impressive.

The 2005 Petit Verdot Apollo Drive Vineyard Limited Edition ($60) is made from 100% Petit Verdot, which you don't often see anywhere. This is the first time the winery has bottled such a wine. The wine spent 14 months in French oak, 33% new. It has an alcohol content of 13.5% and only 76 cases were produced. This wine had an intriguing berry nose, a melange of smells that flitted back and forth in my nose. On the palate, this was a "Wow" wine, impressing me with its rich, lush and complex flavors. A compelling blend of fruit and spice that tantalized my taste buds. The undercurrent of blueberry was delicious. The finish was very long and such a pleasure. The tannins were strong, but it is a well balanced wine that should cellar well. Though I think you could easily enjoy this wine now, it may be even better in a few years. I bought some of this wine as I just had to have it. What an exceptional wine and well worth its price.

The 2005 Cabernet Sauvignon Tuthills Lane Vineyard ($60) is made from 93% Cabernet Sauvignon and 7% Cabernet Franc. The wine spent 14 months in French oak, 40% new. It has an alcohol content of 13.5% and only 351 cases were produced. I have not had many good Cabernets from New York. But this wine shows that New York certainly can make an impressive Cabernet. Dark red in color, the nose is rich with ripe berries and a touch of spice. On the palate, there is ripe plum, blackberry and black cherry accompanied by vanilla and spice. A harmonius blending with moderate tannins and a very long finish. This is a top notch example of Cabernet, on par with many of the better California Cabernets. An excellent wine that is worth the price.

I enjoyed all of the wines I tasted and some of them really impressed me. I think their pricing is on par with the quality of their wines. They have plenty of diversity in their wines and there is something that should please everyone. Because of their small production, their wines are mainly available at their winery. They are well worth seeking out though. I do know that the next time I visit the Long Island wineries, I will be returning to Paumanok Vineyards.
Posted by Richard Auffrey at 6:00 AM