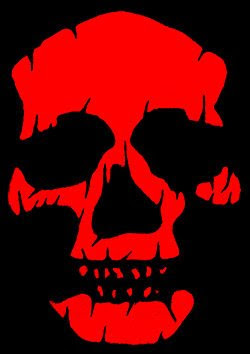 Though Halloween is still over one month away, I have already found the best choice for a Halloween wine, the new 2006 Twisted Oak River of Skulls. Just check out the eerie red skull that is on the label. Plus, the history behind the name of the wine provides a rather grisly background, a ghost story that could be easily embellished.

"In 1805, Lieutenant Gabriel Moraga was ordered by the Spanish Governor of California to explore the Great Central Valley. displace the local Natives, and re-name everything he found. Well, one day Gabe and his horsemen came across a river the banks of which were littered with skulls. No one knows for sure how the skulls came to be on the banks of this river. Perhaps they were the remains of an ancient battle, or a terrible plague. Or perhaps it was a really great party that suddenly went horribly wrong. Whatever the case old Gabe, being a true master of the obvious, named this river "El Rio De Las Calaveras" or in English, "The River of Skulls."
Just imagine that it is Halloween night and in dim candle light you pass around this wine. As you do so, you begin to tell the story of Moraga. You could claim to know the true origin of the skulls found on the river and will tell everyone the eerie secret. There are just so many horrific possibilities.
Yet this wine is more than just a creepy label and backstory. It is an excellent tasting wine and I was lucky enough to sample some this past weekend.
The 2006 Twisted Oak River of Skulls (Twisted Few price $28/Regular $35) is a limited production, single-vineyard Mourvedre from Calaveras County in the Sierra Foothills of California. This release does have 10% of Syrah added to it. This wine will only be released once a year to members of their River of Skulls mailing list, members of The Twisted Few wine club, and to a limited number of restaurants. You can still sign up for the River of Skulls mailing list and I strongly urge you to do so.
I love Mourvedre so the River of Skulls certainly sounded like a wine I would enjoy. And it pleased me immensely. It had a nice ruby color though it was not overly dark. When I smelled it, a delightful torrent of lush fruit wafted up from the wine luring me deeper into the glass. The taste fulfilled the promise of its nose, provide ripe cherry and strawberry flavors that mingled with hints of vanilla and and spice. The spice was most prominent on the finish, as well as with a touch of tobacco, though in a good way. I don't smoke and dislike its acrid smell yet a touch of tobacco flavor in wine is pleasing to me. There were some moderate tannins so this wine may go best with food to help mellow those out. The finish is very long and satisfying, making you yearn for more.
Overall, the wine is well balanced, complex and very tasty. In many respects, this wine reminded me of a softer version of the El Nido Clio, my favorite Spanish wine made with Mourvedre (known as Monastrell in Spain).
I drank this wine with grilled steak and I think it went very well together, softening the tannins and creating a mellower wine. My wife and I finished off the bottle as we both enjoyed it so much. Plus I am going to keep the bottle as I am sure I can find some use for it. Just can't bear to toss out that red skull.
While I recall the delicious taste of the wine, my own thoughts return to the real River of Skulls. Why were those skulls there? It intrigues the writer in me and maybe it will lead to a new short story. I have always enjoyed the horror genre. With Halloween approaching, maybe El Jefe at Twisted Oak could create a new contest where people could submit their theories as to the origin of those skulls.
Posted by Richard Auffrey at 6:05 AM

I dig the fact that you review the wine with food - that's exactly how I do it (seeing as how I don't normally drink my wine blind unless I'm in the dark!).

The question is, did El Jefe manipulate us into giving him free publicity...

Rich, I finally published my review of this wine at: http://www.DrinksAreOnMe.net