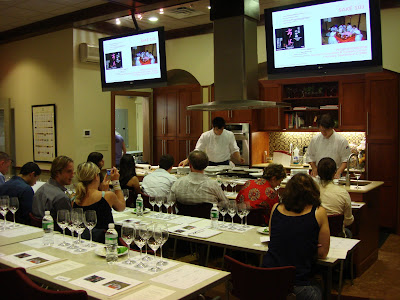 I already have a fair share of knowledge about Saké, though there is definitely plenty more I could learn. When I signed up for a Sushi & Saké class at Gordons Fine Wine and Culinary Center in Waltham, I was not sure whether I would benefit much from it or not. I did though want to see Michael Simkin, a well known Saké expert, speak. I also invited some members of the North Shore Winers to attend, as they generally knew little about Saké. In the end, I was very glad that I attended.
As I have mentioned before, Gordon's has an excellent venue for these type of classes. Their tasting room has a kitchen, allowing them to easily present combined events like Sushi and Saké. The class sold out and there were probably close to forty people present. Each seat had several handouts on Saké. 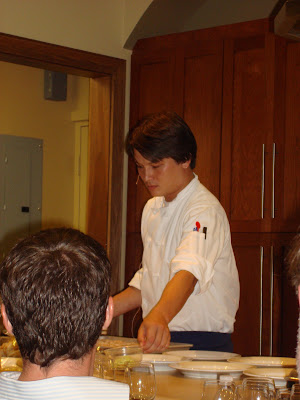 Presiding over the Sushi section of the class was J. Kenji Alt, currently the Associate Editor of Cook's Illustrated and a freelance food reporter for various publications. Kenji started out as a chef/cook at various Boston restaurants including Clio, No. 9 Park, Toro, Uni, and B&G. He was assisted by Francisco Robert, a Test Cook at America's Test Kitchen. Besides making the dishes for the class, Kenji also talked about them. Kenji had worked closely with Michael Simkin to ensure excellent pairings for the various Saké we would taste. And the food was exceptional. 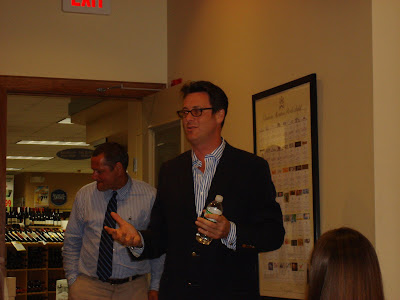 Michael Simkin has traveled extensively in Japan, visiting and even working in numerous Saké breweries. He consults with some breweries to help get their Saké introduced into the U.s. market. He also runs numerous seminars, spreading the word like a Saké ambassador. He initially began our class with an educational overview of Saké, including the brewing process. He tried to keep matters simple but thorough and I think he did an excellent job. Learning about Saké can seem overwhelming, especially with all the foreign words, but it can be simplified. Michael also answered numerous questions that the attendees asked.

When that portion of the class was over, Michael then guided us through a tasting of five different Sakés. All of the Saké was produced by the Ichishima Brewery in the Niigata Prefecture of Japan. There are about 96 Saké breweries in this prefecture, which is sometimes referred to as the "King of Saké brewing." At the annual and prestigious Saké competition, this prefecture usually wins the most gold medals. Ichishima was founded around 1790 A.D. and has been owned by the same family continuously.

Ichishima is also famous for being the first brewery to have licensed female toji, brew masters. They first began employing women in 1965 and the first woman was licensed as a toji in 1976. As I have discussed before, Saké had long been traditionally a man's domain but that has been changing. And Ichishima has helped lead that change.

The Ichishima Saké we would taste are not currently available for sale in the U.S. though will be very soon. So, we had one of the first opportunities to taste these Sakés. That was certainly a bonus to going to this class. Rather than taste the usual Saké brands currently available on the shelves, we got to taste something brand new.

Our first course of the evening was Diver Scallop Sashimi with fresh Wasabi, Myoga and Mustard Seed Caviar. The scallop were caught the night before and were very tender slices. The mustard seed caviar made a thin line atop the scallop and added to the intriguing taste. On the side was Myoga, a milder form of pickled ginger, and real Wasabi, not the usual fake paste you get elsewhere. The mild Myoga did not distract from the mild taste of the scallop. Just an exceptional dish.

The scallops were paired with a Ichishima Honjozo ($30). I found this Saké to have a fruity nose with an intriguing taste of banana, a little steamed rice, and some melon. It had a dry taste, with a nice acidity. It was easy drinking and did not overpower the scallops. A very pleasant Saké and something that may appeal to those new to Saké.

The second course was a Hamachi Sashimi with Ginger-Watermelon juice, Basil seeds and Shiso chips. Another excellent dish with very fresh fish combined with an intriguing fruity juice that worked very well with the hamachi. Again, the combination of ingredients all complemented each other. With this dish, we had the Ichishima Junmai Ginjo ($40) which possessed a bit of a fuller flavor though it was also a very smooth Saké. It had a more complex taste, though in a more subtle way. A very pleasing Saké and one which I could sit and drink all evening. This would also be another one that would appeal to those new to Saké.

Up next was Salmon Sashimi with Fermented Soy Beans, Scallions and Liquid Nori. The thick, fatty salmon pieces were topped with an earthy sauce that was delicious. This might have been my favorite dish of the evening. The silky salmon presented a nice mix with the hearty sauce. This did require a heartier Saké, the Ichishima Junmai Genshu ($40). This was a richer, more full bodied Saké with excellent fruit flavors. It did have a tinge of an alcohol smell, though it does have a bit more alcohol than the usual Saké. But the Genshu shows how certain types of Saké can pair well with heartier dishes.

The fourth dish was a Simmered Duck Breast with Yu Choy and Onions. A very good dish with three pieces of tender duck meat, cooked medium rare. This was paired with the Ichishima Koshu Ginjo (about $58), a Saké that was aged for five years. I was a bit hesistant about this style as I have generally not had good experiences with aged Saké. They have been too harsh, too much like a bitter port. It did have some of that port-like smell but the taste was not like any Koshu I have had before. Though it was full bodied and earthy, it was also milder and smooth. It was more akin to a well aged port that has lost its bitter edge though not as heavy as such a port. I very much enjoyed this Saké and am certainly glad I found a Koshu that I enjoy.

The final dish was a Miso-Glazed Eggplant with Charred Sea Urchin. I don't care for eggplant so I did not like this dish, but it is only personal preference. If you like eggplant, I think you would have very much enjoyed this. I did eat and enjoy the sea urchin, which had almost a custard texture. And I have had miso-glazed items before, which have a nice sweetness to them. This dish was paired with a non-traditional Saké, the Ichishima Silk Deluxe Junmai ($25), which you can see below. This is a slightly sweet Saké though it is mild, not cloying. It has a silky texture with some mild fruit, cotton candy and rice flavors to it. I like this as well, especially as the sweetness was more subtle. 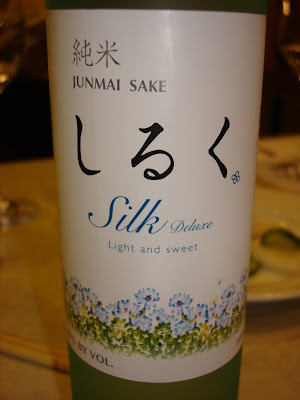 Overall, this was an excellent class I and I highly recommend that you sign up for the next one Gordon's schedules, whether you know a little or a lot about Saké. Kenji and Michael were excellent presenters and you will learn much at this class. Plus, the food and Saké were exceptional. I would recommend all five of the Sakés we tasted.
Gordons Fine Wine and Culinary Center
894 Main Street
Waltham, MA
Phone: 781-893-1900
Posted by Richard Auffrey at 6:00 AM