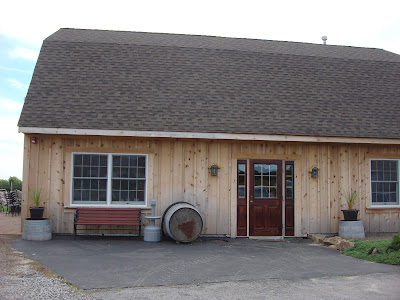 I had to visit Long Island for business and decided that on my way home, I would stop by a few of the wineries on the North Fork of Long Island. But which ones to visit? I knew that my best choice would be to ask Lenn of Lenndevours for some recommendations as he covers New York wines on his blog and knows a lot about the Long Island wineries.

There are two main roads through wine country on the North Fork, Route 25 & 48. There are wineries located on both routes and there are plenty of streets that connect these two routes, making travel relatively easy. There are also plenty of wine trail signs, indicating the wineries. Along the way, you will also find many farmstands selling local fruits, vegetables and other items. We stopped at a few of them on route, loading up the trunk with the fresh produce.

The first winery we visisted was Roanoke Vineyards, located on Route 48. Roanoke is owned by Richard Pisacano and his wife Soraya. Richard had been involved in vineyards on Long Island for almost thirty years, having helped to plant and maintain some of the first vineyards here. For over ten years, he has been the Vineyard Manager at Wölffer Estates. The wine maker at Roanoke is Roman Roth, who is also the wine maker for Wölffer and The Grapes of Roth. 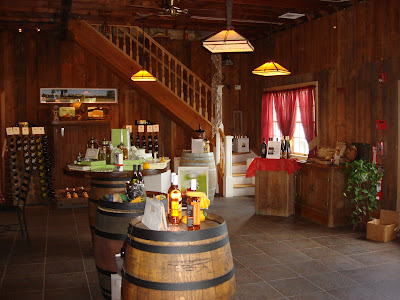 Roanoke is a small, boutique winery and their wines are generally only available at the winery or online. They seek to make Old World-style wines and concentrate on Cabernet Sauvignon. their tasting room, pictured above, is reminiscent of an old country store. They have two tasting flights available, one for white wine and one for red. Both cost $7, for a flight of four wines, and it is free if you spend at least $70.

The 2007 Roanoke Vineyards De Rosa Rose ($16) is a blend of 36% Merlot, 13% Cabernet Franc, 22% Cabernet Sauvignon, and 29% Chardonnay. It was fermented in stainless steel, did not undergo malolactic fermentation and has an alcohol content of 12%. Only 337 cases were produced. I found this to be an Old World-style Rose, more like a French Rose than a California one. It was a dry Rose with more subtle fruit flavors. Though there were hints of strawberry and raspberry there was also a touch of apricot, almost as if it were an aged Rose. It had good acidity and a moderately long finish. I enjoyed this wine very much and it would make for a great summer sipper.

The 2004 Roanoke Vineyards Merlot ($45) contains 93% Merlot, 4% Cabernet Franc, and 3% Cabernet Sauvignon. It spent 16 months in French Oak, about half being new barrels, and has an alcohol content of 13.2%. Only 121 cases were produced. This fine was plenty of ripe plum, raspberry and black cherry flavors, as well as a touch of almost cinnamon. The tannins are mild and it is a smooth drinking wine. The finish is moderate though there is a touch of tartness on that finish. Though I enjoyed this wine, I think it is too expensive for what you get, a problem I have seen before in some Long Island wines. At $45, I want more of a "wow" factor with a wine.

The 2005 Roanoke Vineyards Blend One ($30) contains 52% Malbec, 14% Cabernet Sauvignon, 17% Cabernet Franc and 17% Merlot. Only 150 cases were produced. This wine had some of that wow factor. It had an intriguing nose of ripe dark fruit and that fruit also came out on my palate, lush plum, ripe blackberry and a hint of blueberry. It also had a spicy backbone that complemented the wine. The finish was long and satisfying, a sensual pleasure. The tannins were moderate and there was plenty of complexity. A wine I would definitely recommend and which I bought some.

The last wine was not from Roanoke but was a 2003 Wolffer Estate "Estate Selection" Merlot ($35). This wine is made of 88% Merlot and 12% Cabernet Franc. The wine spent 20 months in French Barriques (50% new oak and 50% one-year-old oak) and only 548 cases were produced. This wine had an almost musty smell to it, not enough to be offputting but not quite pleasing either. But it had quite a delicious taste. It reminded more of a Bordeaux, and there were excellent dark red fruit flavors with hints of both vanilla and chocolate. The wine was very well balanced and the tannins were unobtrusive. The wine had a long finish with more vanilla at the end. There was plenty of complexity in the wine and I was impressed with it. I would also recommend this wine and I bought some of it as well.

Overall, I enjoyed all four wines, though I felt the Roanoke Merlot was overpriced. I would recommend a stop by the Roanoke tasting room if you are in the area. Lenn's first recommendation to me was a good one so I looked forward to the next winery on my itinerary.
Posted by Richard Auffrey at 10:01 AM

Glad that you too me up on the reco to visit Roanoke. It's not nearly as well known as the other wineries I pointed you too, but I think there wines are among the best.

I only wish that they weren't sold out of their 04 Blend Two...a cab franc-heavy blend that I think might change your mind about that grape.

I have a few in my cellar, perhaps we can open one together soon.

I definitely would enjoy sharing some wine with you.