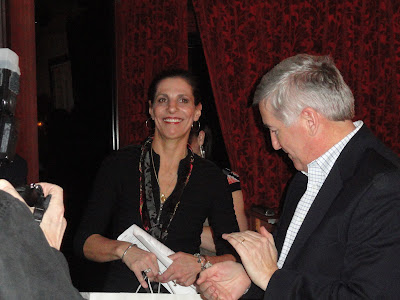 I have a special spot for charitable food & wine events, especially those based on a more grassroots effort.  That is the case with the 6th Annual CityFeast which was held this past Sunday in the North End. Carla Gomes (pictured above) is the owner of two restaurants, Antico Forno and Terramia.  She also has a son with diabetes and founded City Feast to help raise awareness of the disease and support Joslin Diabetes Center's mission of conquering diabetes in all of its forms. I attended this event last year, a resounding success, and attended it again this year. 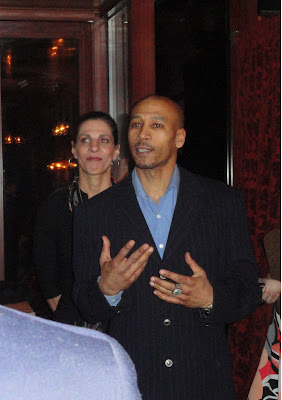 Dana Barros, a former Boston Celtics player, was also on hand to lend support to the cause.  The event began with a reception at Antico Forno, with Prosecco and arancini, and Dana spoke briefly there, also passing out autographs. Afterwards, he made an appearance at all of the other participating restaurants, also announcing that the Celtics had defeated the Lakers that evening.  Dana was very personable and down to earth, even taking off his championship ring to show our table. 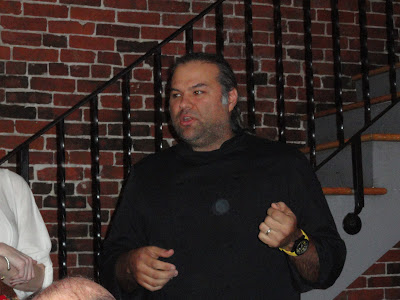 Six North End restaurants participated in City Feast, including Terramia, Antico Forno, Lucca, Tresca, Caffé Graffiti and Taranta. Each restaurant offered a five or six course meal, with wine paurings, and I had the pleasure to dine at Taranta with Athena (of Forays of a Finance Foodie) and Dale (of Drinks Are On Me).  I am a big fan of Chef Jose Duarte (pictured above) and his meal thoroughly impressed me once again, especially with his use of Peruvian ingredients which you will find in few other places.  It really makes me curious why other restaurants have not started using some of these unique ingredients as they certainly offer enticing flavors.

The evening at Taranta began with a Pisco Sour apertif, a popular South American cocktail, and I enjoyed its puckery taste.  Next up, we were poured a glass of Estrella Damm Inedit, an intriguing Spanish beer.  "Inedit is a unique coupage of barley malt and wheat, flavored with coriander, orange peel and liquorice.  Inedit is the first beer specifically created to accompany food... Has been created by Damm brewmasters, ...and by Ferran Adrià, Juli Soler and El Bulli’s sommeliers’ team."  I am generally not a fan of beer, so this was not something I liked, but I appreciate its use in the meal and think beer lovers would enjoy it. 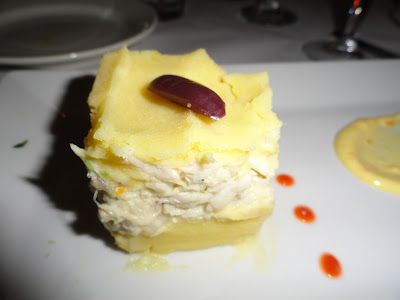 Our first course, paired with the beer, was a Crab Meat Causa (a type of mashed potato dumpling), and it was tasty with plenty of sweet crab meat between the soft and flavorful potatoes.  A very nice way to start the six-course dinner. 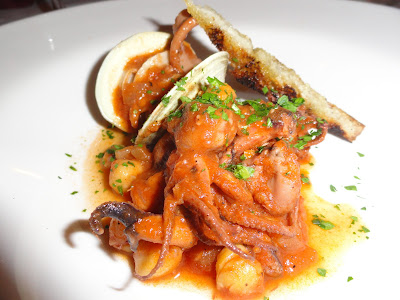 The second course was a Coccio di Pesce, made with with Stony Island clams, baby octopus, cuttlefish, Spanish smoked paprika and garbanzo beans.  This was paired with a Chilean Sauvignon Blanc. The slightly spicy red sauce complemented the very tender seafood.  The baby octopus were delicious, and had been cooked perfectly so that they were not tough or rubbery in the least. 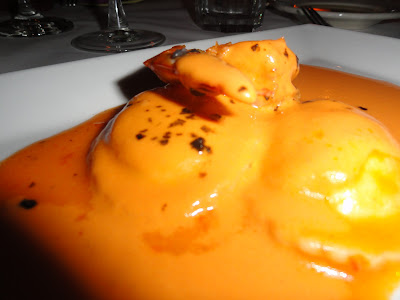 Next up, Lobster & Crab Ravioli in a mascarpone and cherry tomato sauce with a Gulf of Mexico shrimp and topped by some Cyprus black salt. This was paired with a Cono Sur Pinot Noir from Chile.  The firm ravioli contained plenty of sweet meat and the sauce was creamy and addictive.  I used some of the bread to sop up the sauce, until my plate was nearly clean. Though Pinot might not have been your first choice for this dish, it worked well together. 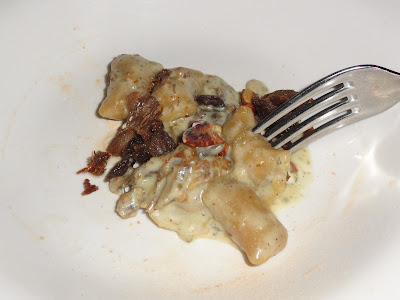 The first three dishes were all very good, but the fourth one was superb, an incredible melagne of appealing flavors and textures. The Auyama Gnocchi is in a sage cream sauce with duck confit, roasted pecans and topped with lucuma dust.  Auyama is a type of Peruvian pumpkin and the firm gnocchi had an intriguing taste, not like the usual American pumpkin gnocchi I have tasted before. Lucuma is an interesting Peruvian fruit that can add a butterscotch flavor. This hearty dish contained a very nutty flavor with hints of exotic spice and cream. It was complex, and the flavors created a very harmonious whole. It was the type of dish you craved seconds, thirds and more and also showed the vast potential of Peruvian ingredients.  This dish needs to be on Taranta's regular menu.

The gnocchi was paired with a 2008 Chono Carmenere Reserva from Chile. I am not usually a fan of Carmenere as far too much of it has a green/vegetal flavor which I dislike but this wine was not like that at all.  It was actually more fruit driven, with a decent complexity and smooth taste.  It is a wine I would buy and enjoy and I was very glad to find a Carmenere that appealed to me. The fifth course continued to impress, a Braised Short Rib with a Panca pepper sauce and Chuño au Gratin.  Panca is a type of Peruvian chile pepper.  The beef was incredibly tender, and the pepper sauce was only mildly spicy but very flavorful.  A hearty choice for a cold winter evening. The wine pairing was a Argentina red blend from La Posta, which contained Malbec, Syrah and Bonarda, and it went well with the beef and sauce. 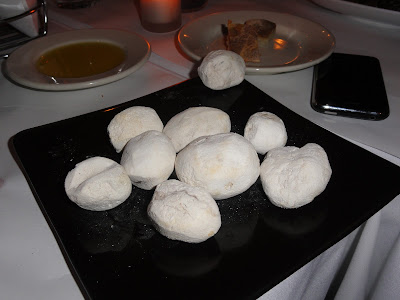 This is a photo of Chuño, freeze-dried potatoes from Peru. These potatoes, in their raw form, are toxic and thus are rinsed for days to remove those toxins.  In the winter, they are placed outside to dry for about 30 days.  The entire process helps to preserve the potatoes, and they supposedly will last for 12 years!  For the au gratin, they used about 85% Gruyere cheese and the overall taste was exquisite, an excellent side dish for meat. 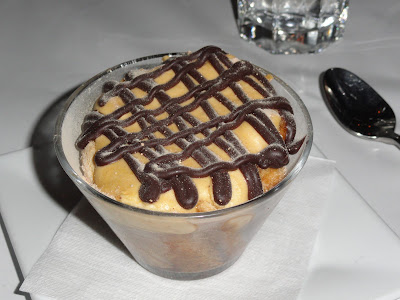 Dessert was Lucumiso, a tiramisu-like dessert with Peruvian accents.  It used the Lucuma fruit that I mentioned previously, and the fruit gave this dish a more unique flavor, though still recognizable as a tiramisu type dessert.  You might have difficulty pinpointing the flavor of the lucuma but you will find it pleasing.

Fusion cuisine sometimes gets a bad rap, but Chef Duarte proves that two different cuisines can meld seamlessly and create a unique blend of flavors.  The Peruvian ingredients he uses are compelling, and add depth, taste and complexity to his dishes.  I am extremely pleased that I got to dine here for City Feast, and will return again and again, to see what new dishes Chef Duarte has created.

Thanks very much to Carla Gomes for another successful City Feast, and I hope my readers lend their support to the Joslin Diabetes Center.
Posted by Richard Auffrey at 5:00 AM

awesome recap! fantastic seeing you and Dale! Did you guys go for oysters after???

Looks like a special meal. Liz practiced at Joslin for 15 years and I only went to one fundraiser but the chicken was rubber....I need to try Taranta.

Im glad you liked Peruvian food. Isn't it the best? Peruvian ingredients are that well known yet, but our food is starting to become an international boom so hopefuly one day all this will be more readily available. For an amazing recipe of causa, one of the dishes you liked so much, check out my new blog about Peruvian cuisine http://perudelights.com/causa/ It's funny that you named your article peruvian delights, thats the name of my blog!