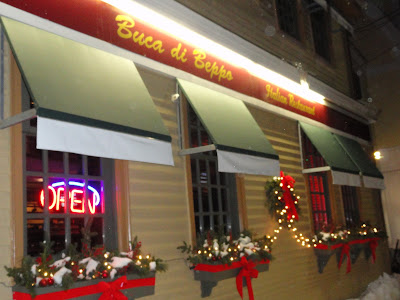 Buca di Beppo is an Italian restaurant where all but the most ravenous diners will have doggie bags to take home. They serve family-style food in two sizes: Small, which feeds up to three people, and Large, which feeds up to six people. The only exception is that at lunch they offer single-serving dishes.  But, in general, you are going to have lots of food on your table.

Buca di Beppo is a chain, the first restaurant having opened in 1993 in Minneapolis, and there are now approximately 87 locations across the country, including four in Massachusetts: Lexington, Dedham, Shrewsbury, and Seekonk. In 2008, the company was purchased by Planet Hollywood International Inc. Its Massachusetts' locations are relatively new and I was recently invited to check out their Lexington restaurant.

Though it is a chain, I don't dismiss a restaurant simply because of that fact.  Not all chains are the same, and some actually produce tasty food.  Each chain needs to be evaluated on its own merits, though also considering the intent of the restaurant. Buca Di Beppo wants to appeal to families and groups, providing lots of food at reasonable prices. It is not seeking to produce gourmet cuisine, and is trying create the type of food that is familiar to most consumers.

Their menu is fairly extensive, with Antipasti, Insalate, Pizza, Pasta, Baked Pasta, Entrees and Side Dishes. Plus, they have a number of limited-time specials. You'll find lots of the usual red-sauce Italian dishes, from chicken parmigiana to meatballs, from lasagna to fruitti di mare. Prices seem reasonable considering the amount of food you receive, such as small entrees, enough for three people, ranging from $17-$26.

I did have an initial issue with my menu being dirty and sticky, and my companion's menu was also dirty, though not to the extent of mine. That left a bad first impression and Buca needs to address that issue.  Their menus have that plastic-like coating and it should be easy to keep them clean, though they need to regularly check the menus.

The wine list has many mass produced, commercial choices, not much to excite a wine lover, but most are reasonably priced.  I tried their House Chianti though and was pleasantly surprised, as it was an easy-drinking, fruit driven wine with more character than I would have expected at its low price point.  I also tasted the Italian Margarita, which was ok but too sweet for my tastes.  But, I can see how many others would enjoy it.  They make homemade sodas, so I had to try one and decided on the Purple Pear.  I really enjoyed it, especially as it was not overly sweet and had nice tastes of pear and strawberry. 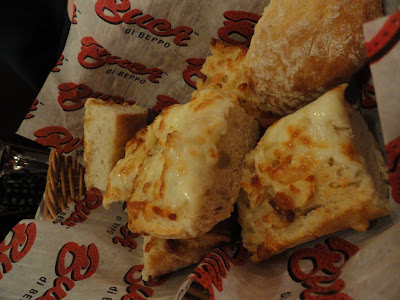 We began our meal with a basket of Mozzarella Garlic Bread ($9.45/small), and it was tasty with fresh bread, lots of cheese, and big pieces of garlic.  It is something you can enjoy on its own, or use later in your meal to sop up sauce.  It was a promising start to the meal. 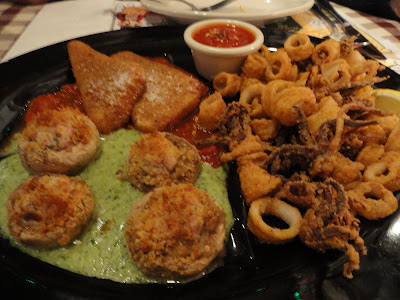 We then moved onto an Antipasti, the Buca Trio Platter ($19.95), a sampling of Fried Calamari, Fried Mozzarella and Stuffed Mushrooms served with marinara, a spicy marinara and a pesto cream sauce. The calamari were crisp and tender, while the mushrooms were flavorful, filled with prosciutto, cheese and spices.  The fried mozzarella was crisp on the outside, with lots of creamy cheese within. A good fried appetizer. 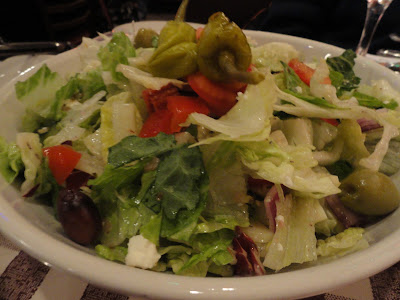 The Chopped Antipasto Salad ($12.45/small) includes diced pepperoni, red onions, pepperoncini peppers, cucumbers, provolone, feta and Gorgonzola cheeses, tossed with a lettuce blend in an Italian vinaigrette.  This is not quite what I expect from an Italian Antipasto, and is more just a regular garden salad with a few additions.  As a regular salad, it was good, the veggies seemed fresh and I liked the dressing. The different cheeses were a nice addition, adding more flavor and texture to the salad. 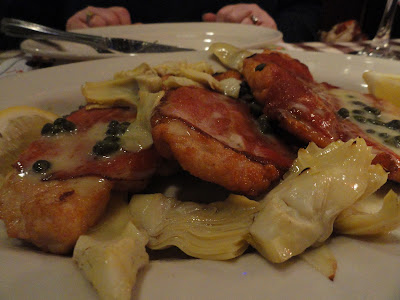 For our first entree, we tried the Chicken Saltimbocca ($20.95/small), sautéed chicken breasts layered with fresh sage and prosciutto, topped with artichoke hearts, lemon butter sauce and capers.  The chicken was moist and tender, and the sauce was light and buttery with only mild hints of lemon. 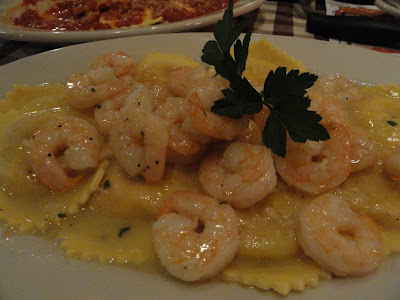 My favorite dish of the evening was the Lobster Ravioli ($22.95/small), home-style ravioli stuffed with North Atlantic lobster, topped with shrimp and in a scampi sauce.  The ravioli were excellent, apparently home-made, and filled with plenty of sweet lobster.  The scampi sauce was very good, a bit creamy with lots of flavor.  A perfect sauce for dipping your bread.  This is a dish I would highly recommend, though note that it is one of their limited-time specials. 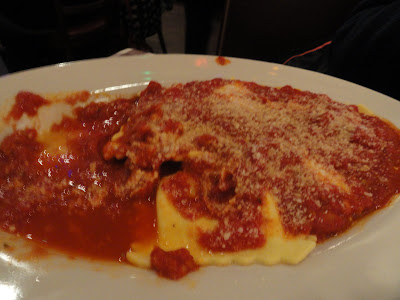 As the server made a mistake, we ended up with a plate of Cheese Ravioli and the ravioli were as good as the lobster ones.  The inside of the ravioli had plenty of cheese and the red sauce was good. 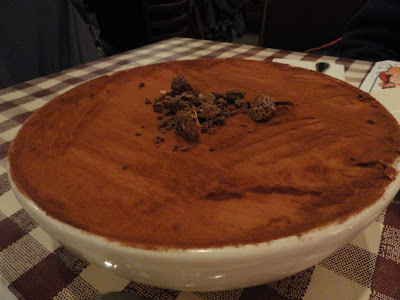 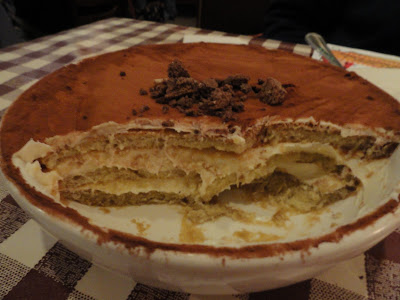 Though you might have a huge dinner, you should try to save some room for dessert.  The Tiramisu ($10.45) has homemade ladyfingers soaked in dark rum and espresso, layered with sweetened mascarpone cheese and topped with cocoa and crumbled hazelnut biscotti.  This huge bowl of dessert has powerful flavors and a light and creamy texture. An absolutely delicious dish, I enjoyed some the next day too as I certainly could not finish it all at the restaurant.

As Buca di Beppo is new, I give it some leeway so they have sufficient time to work out the initial kinks. But, the food in general is good, with a couple dishes that are excellent. Plus note that I only tried a small sampling of their menu so I can't speak for the rest of the food.  It would be a great place for families and large groups to dine. It is not a fine-dining establishment but does not pretend to be either.  It is a place for hearty fare, to sate almost any appetite.

Reading your blog for sometime now and was wondering if you exercise at all with the foods and drinks you seem to have everynight.

Honestly, I could use to exercise more, which is a common issue for many people.

Really its recipe very lovely and colorful . i like that and i think very tested its recipe . great idea for recipe ....Mozzarella Garlic Bread my favorite recipe