As usual, I only tasted a sampling of wines at the Boston Wine Expo as there are far more wines available than anyone can reasonably taste in three hours.  So, over the next several days, I will highlight some of my favorite wines of the tasting. 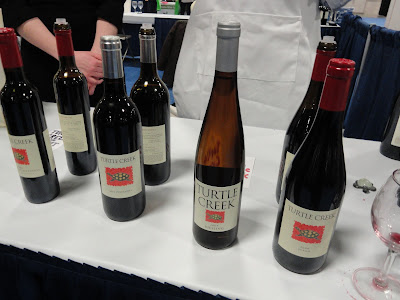 Turtle Creek Winery is an artisan winery located in Lincoln, Massachusetts and I have lots of respect for its owner/winemaker, Kip Kumler.  The winery produces wines from both imported grapes as well as from those in their own vineyards.  Total annual case production is only around 900 cases, and basically none of their specifc wines are made in lots larger than 170 cases.  Most of their wines cost around $20, making them very good values, and you can find them in more and more Massachusetts wine stores.  Kip is truly passionate about his wines, and it shows in their quality.

At the Expo, I got to taste his 2009 Riesling, 2007 Zinfandel, 2008 Syrah, 2008 Late Harvest Zinfandel and a barrel sample of the 2009 Cabernet Franc.  All of these wines were made from imported grapes, such as the Finger Lakes for the Riesling and California for the others.  He did not have any of his Estate wines available at the Expo.  I really enjoyed the Riesling, an off dry style, and the Zinfandel, which was more restrained than many other California Zins.  The Late Harvest Zinfandel was not overly sweet, and had plenty of acidity and strong fruit flavors.  The Cab Franc also showed much promise, a bold wine with intense blackfruit flavors and no offputting green/vegetal tastes.  I will be seeking that one out when it is finally released. 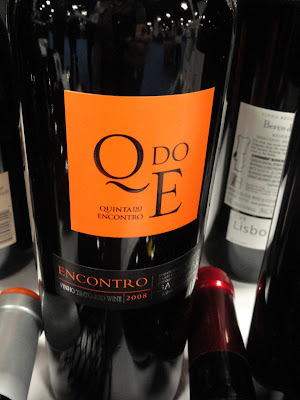 The Baga grape, primarily from the Bairrada DOC of Portugal, often produces extremely tannic wines. Yet that is not always the case.  The 2008 Quinta do Encontro Vinho Tinto (about $10) is primarily made from Baga with a tiny bit of Merlot added.  This is such a smooth, easy drinking wine that it almost seems difficult to believe it was produced from the tannic Baga.  It is a lush wine, with intense red fruit flavors and some underlying spice notes.  It has character for a wine at this price point and I could easily see this paired with lamb, BBQ or even some pasta with Bolgonese. 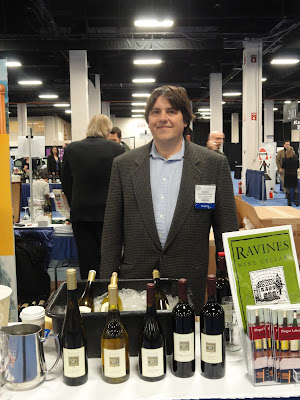 It was a pleasure to once again see Morten Hallgren of Ravines Wine Cellars, an excellent winery located in the Finger Lakes region of New York.  Several Finger Lakes' wineries usually attend the Expo, and I do wish some from Long Island would also make the short trek. But it does not seem they have much concern for the Boston market, or at least marketing through this venue.  I will note that a number of Long Island wineries showcased their wines at the Mohegan Sun Wine Fest in Connecticut.

The Ravines 2008 Chardonnay ($18.95) is unusual as about 20% of the grapes were dried using a traditional drying technique called "appassimento."  Though this can tend to produce sweeter wines, this did not seem to be the case here.  There was plenty of crisp acidity with pleasant fruit flavors of pear, green apple and citrus. The oak elements seemed restrained and I believe this would be an excellent food wine, and could even be enjoyed on its own.  The 2008 Cabernet Franc ($18.95) was also produced partially with the appassimento method, the first time Morten has tried it with this wine, as he wanted to derive a more intense fruitiness. I believe he was successfull, and this is a very fruit forward wine with some herbal notes though not a vegetal taste.

The 2007 Meritage ($24.95) is a blend of 60% Cabernet Sauvignon, 30% Cabernet Franc, and 10% Merlot.  The New York Cork Report selected this wine as the Finger Lakes Red Wine of the Year. Personally, I very much enjoyed this wine, which is closer to Bordeaux than California in style and at this price is it also a very good value.  It is well structured and has a pleasing blend of tannins, acidity, fruit and spice. If there are any criticisms, it might be that it is a bit overly tannic at the moment, and could benefit from a little aging, or simply to be accompanied by a juicy steak.  Check this wine out.
Posted by Richard Auffrey at 4:00 AM