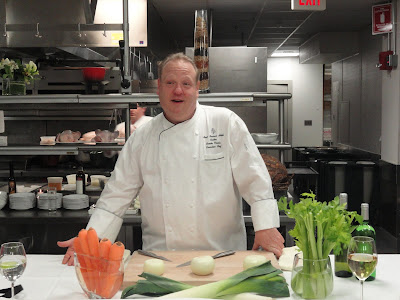 Forget all of those expectations with Executive Chef Brooke Vosika of the Four Seasons Hotel.  Though Chef Vosika has worked for various Four Seasons properties for the last 25 years, his passion does not appear to have dimmed at all. He is concerned about sustainability, and also helps to give back to the community, especially through programs designed to educate young people about local food and nutritition.  This is not a chef who "phones it in."  This is a chef who still has a deep love for food and wine, who still immensely enjoys culinary endeavors.  Chef Vosika was impressive on multiple levels. 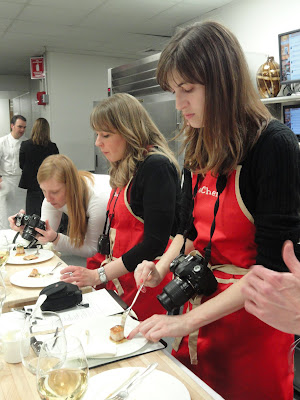 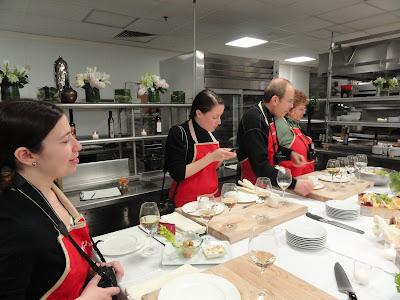 Every month, Chef Vosika holds a public cooking class, and last week a group of food bloggers were invited to participate in a special cooking class, to give us an idea of what the Four Seasons has to offer.  There were eleven of us, including such fine people as Katie of The Small Boston Kitchen, Rachel of Fork It Over, Boston, Megan of Delicious Dishing, Meghan of Travel, Wine and Dine, William of The Boston Foodie, Michelle of Fun & Fearless in Beantown, Fiona of A Boston Food Diary, and Aimee of The Apron Archives.

Much of the cooking class was a demonstration by Chef Vosika of how to prepare two different dishes: Bay Scallop Chowder and Chicken & Truffle Dumplings.  During the demonstrations, we also got to sample other tasty dishes prepared by the rest of the culinary staff.  Plus, there was wine to accompany the food, including a couple made by Chef Vosika himself!  A chef who makes his own wine certainly intrigues me.  We got to taste his Sauvignon Blanc and Pinot Grigio, both which were simple but pleasant wines. 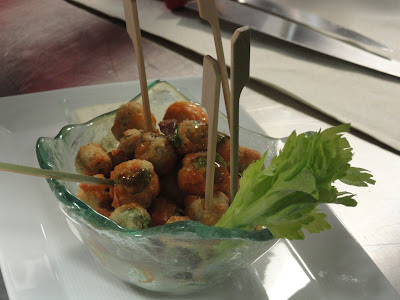 An appetizer of buffalo fried brussel sprouts, which the other bloggers seemed to really enjoy.  There were also plates of cheeses and sliced meats for us to nibble upon. 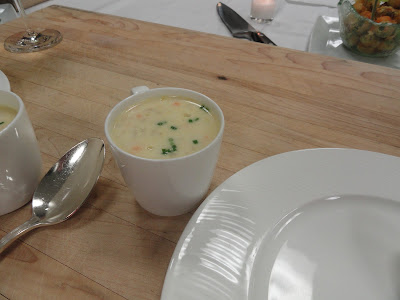 This was the Bay Scallop Chowder, which Chef Vosika makes unique by adding gin to it, rather than sherry or wine.  He likes the addition of the taste of juniper to the chowder, and it certainly possesses that flavor without having a strong gin flavor. The base chowder is easily adaptable for other seafood as well, from lobster to white fish.  It was relatively simple and quick to prepare, so almost any cook could easily make it. 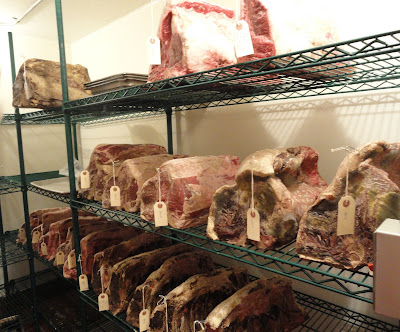 We also had the opportunity during the class to check out their dry aging storage room. All of their beef is sustainable and grass fed, most undergoing both wet and dry aging, often about 30 days wet age and then 21-28 days of dry age.  This room is a carnivore's heaven, and indicative of Chef Vosika's passion for quality ingredients. Not many restaurants have their own dry aging room, which allows the chef to carefully monitor the progress of the aging process. 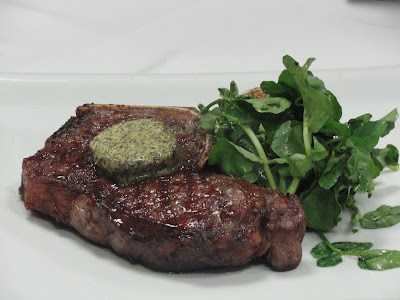 And yes, we got to sample some of the beef, which had some of that delicious gamey taste you acquire through dry aging, and the meat was very tender too. 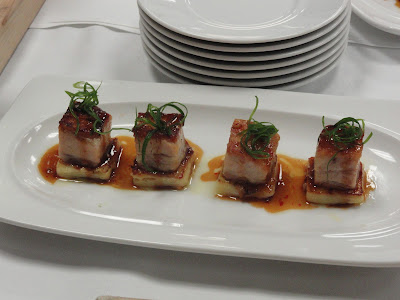 Another appetizer was Pork Belly over Potato Pancake, which will be an addition to their bar menu soon.  Of course it was excellent, such tender and sweet pork belly, atop a moist pancake.  I would order it again off their menu. 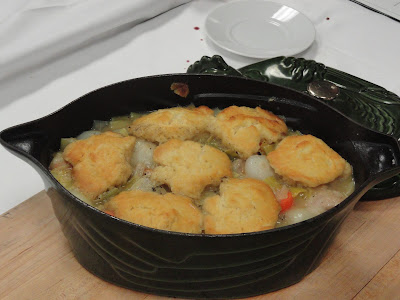 The Chicken and Truffle Dumplings seemed very easy to prepare, and produced a delicious and hearty dish.  This would be a great winter dish, something to warm you up while filling your belly.  Plenty of tender and moist chicken, fresh veggies, and a savory broth. 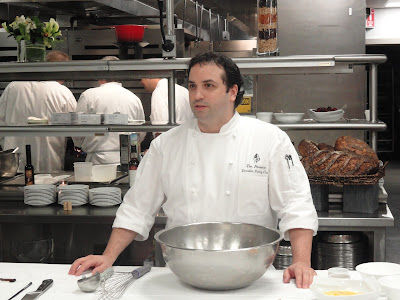 We also received some lessons from Executive Pastry Chef Tim Fonseca, who taught us how to make a Warm Chocolate Cake and an Apple Crisp.  He too was very personable and down to earth. 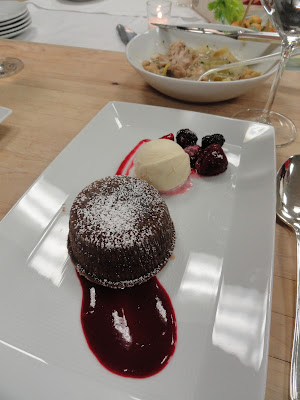 Chef Fonseca not only showed us how to prepare these recipes, but also gave us advice and suggestions on easily modifying the recipes.  We could add our own touch to these versatile recipes, such as relying on seasonal fruits, or emphasizing our own personal preferences.

Overall, this was a fun, educational and tasty event.  Chef Vosika makes an excellent instructor, being very personable, down to earth and witty.  Chef Fonseca was also a good instructor.  It was eye-opening to learn more about Chef Vosika, and I will be following up with him on a couple of matters, which you will read about here in the near future.  I recommend taking one of his upcoming cooking classes, especially if you get a group of friends to take it together.

Cooking classes at the Four Seasons cost $140 per person, and include including light fare, beverages, applicable taxes and gratuity.  Upcoming classes include: Perfect Pasta & Sauces on March 1 and May 11, Sushi & Sake For Couples on April 6, and Summer BBQ on June 16.

Sake?  Mmmmm, I wonder who is doing their pairings.
Posted by Richard Auffrey at 4:00 AM

Nice running into you at the event! I loved how Chef Vosika made the recipes seem so approachable.

To be honest, the best lesson at which I was held here https://culinarylabschool.com. I was bad in cook before culinary lessons. I do not always distinguish a tablespoon from a dessertspoon at first sight. But on these courses, I was taught several dishes and tricks that have already saved by more than one family dinner!