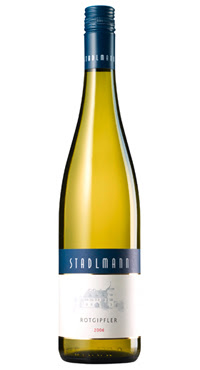 What is Rotgipfler?  No, it is not a strange German zombie disease or some Austrian streudel.  Instead, it is a rare Austrian wine grape.  With my penchant for unusual and rare grapes, I was very pleased to receive a sample of a wine produced from Rotgipfler, to taste what it can create.

The 2009 Stadlmann Rotgipfler Anninger Classic is made by Weingut Stadlmann, owned by Johann and Michaela Stadlmann.  The winery was founded back in 1780 by Johann Stadlmann, and seven subsequent generations have continued the wine making tradition.  The winery practices organic agriculture and believe in no manipulation of their wines.  Their 30 acres are planted with grapes, about 2/3 white, including:  Zierfandler, Rotgipfler, Neuburger, Pinot Blanc, Muskat, Riesling, Gruener Veltliner, Pinot Noir, St. Laurent, Zweigelt, and Cabernet Sauvignon.

The winery is located in the Thermenregion area, which ranges from the outskirts of Vienna to the plain south of Baden. The name "Thermenregion" stems from the thermal springs in the area, and it is one of the warmest of Austrian's wine regions.  To the north of the region is the Anninger, a large foothill of the Vienna Woods.

Zierfandler and Rotgipfler grapes are indigenous to this area, extending back at least as far as the Hapsburg Empire.  Back then, they were both known as “Gumpoldskirchner,” probably named after a similarly named village in the region, and were called, “the wine of kings and the king of wines."  Rotgipfler derives part of its name, "rot" which means "red," for the red tips of its vine leaves.  It is also known to be a cross between Traminer and Roter Veltliner.  So what did I think about the wine made from this grape?

The 2009 Stadlmann Rotgipfler Anninger Classic (about $15) is made with 100% Rotgipfler, from 20 year old vines, and has an alcohol content of 12.5%.  The wine is fermented in stainless steel and spends about four months in large, old oak barrels.  I was having some rappie pie this weekend, and decided to pair this wine with it.  Rappie pie probably pairs best with white wine and I thought this wine might work.

This wine brought to mind a cross between Gruner Veltliner and Gewurtztraminer. The wine was full bodied, with an interesting palate of bright citrus and pear with underlying, and more subtle, spices. Thus, it has some of the fruitiness I associate with Gruner, but with some of the spicy nature of Gewurtz.  It had excellent acidity, some mineral notes, and good character for this price point. It paired well with the rappie pie, the mild flavors of the potato, chicken and pork, as well as cutting through the butter.  A nice value at this price, it offers a slightly exotic option which is worth checking out.  And why not expand your horizon and try a rare grape?
Posted by Richard Auffrey at 4:00 AM

Nice write up. Makes me want to go and buy it right now. Who is the importer? Linda Adams @lwa235

Thanks, I don't know who the importer is but I will try to find out for you.

Importer is Frederick Wildman & Sons in the NY/NJ metro area + more states to come. It is a rare & beautiful varietal and so a limited yield. You can also purchase online from many stores in NY.
We represent Stadlmann in the US-more questions, please email us wine@mcselections.com