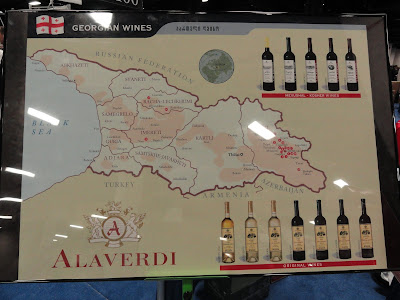 I am back with more reviews of some of my favorite wines of the Boston Wine Expo.  This year, I knew that I wanted to spend some time at the Georgian wine table as I had little experience with those wines. Georgia's history with wine extends back thousands of years, and it may be the oldest wine producing region in the world. Some people even believe that the word "wine" is derived from the Georgian word "gvino" which means "wine."

Georgia is located on the west coast of the Black Sea, south of Russia and north of Turkey, Armenia, and Azerbaijan. There are over 500 indigenous grapes in Georgia though only about 38 are currently used for wine production.  It was traditional for Georgians to ferment their wines in clay vessels, called "kvevri," and bury them underground. They would also store fermented wines underground in these vessels as well.  This tradition has been embraced by modern winemakers in other regions, such as Josko Gravner in Italy. 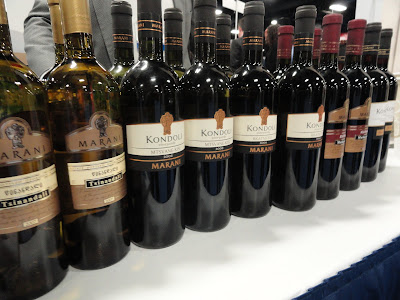 All of the wines I tasted came from the same winery, Telavi Wine Cellar, which was founded in 1915 in Alazani Valley, Kakheti.  The Kakheti wine region contains seven Specific Viticultural Areas (SVA) and vineyards have been planted here for many centuries. The Telavi wines includes three lines: Marani from specific SVAs, Marani from single vineyards, and Satrapezo, which are produced using ancient winemaking techniques such as the kvevri.

The 2007 Marani Tsinandali (about $12) is a white blend of 80% Rkatsiteli and 20% Mtsvane, made in the Tsinandali SVA. Rkatsiteli (which is translated as “red vine”) is the most valuable and widely grown of the Georgian grapes.  Mtsvane (which is translated as "new, young, and green") is often blended with Rkatsiteli to add a fruity, aromatic balance.  About 30% of the wine was aged in oak for 4 months and it has an alcohol content of 13.5%.  I found it to be a full bodied and interesting wine with flavors of melon, apricot, and pear with mild undertones of herbality.  A pleasant, easy drinking wine which is worth checking out.

The 2008 Marani Kondoli Vineyards Mtsvane-Kisi (about $15) derives from a historic vineyard, which has been revered for nearly three hundred years.  The vineyards constitute about 240 hectares, 70% planted with red grapes and mostly indigenous varieties though a small area contains some international grapes.  The Kisi grape is sometimes used to produce dessert wines.  This wine reminded me of a good Chenin Blanc, with nice fruit, acidity, and a very pleasant taste.

The 2008 Marani Kondoli Vineyards Rkatsiteli was a compelling white wine with an intriguing melange of white pepper, spice, and herbal flavors.  In some respects, it reminded me of a Gewurtztraminer yet it possessed its own unique character as well. This may have been one of the best wines I have had from the Rkatsiteli grape.

The 2008 Marani Mukuzani (about $17) is made from 100% Saperavi, produced in the Mukuzani SVA, and has an alcohol content of 13.5%.  Saperavi is a Georgian word which means literally "paint" or "dye," due to its intense dark-red color. This dark colored wine had an enticing black cherry and plum aroma with a palate of those same fruits, meshed with vanilla, spice and a tinge of chocolate. Yet there was also a unique exotic taste to it which eluded definition. Complex and with a satisfying finish, this wine is highly recommended, especially at this price point.

The 2007 Marani Kondoli Vineyards Saperavi presented a Saperavi wine of more substance, which was meaty, spicy and more tannic. The blackfruit flavors were more subdued while the spice was more dominant.  This is definitely a wine that needs food, unlike the Mukuzani which you could enjoy on its own.  It seemed like a more serious wine, and I enjoyed it too.

The 2006 Satrapezo Saperavi is a third version of this grape, presenting a complex wine with a smokier nature which reminds me in some ways of a Pinotage.  There are spice and blackfruit flavors too, melding in an enticing manner.  This wine was aged in a clay vessel and only 500 cases are produced each year.  Saperavi is certainly not a one-trick grape, and can obviously create wines of different styles.

The 2007 Satrapezo 10 Keveri (about $35) is produced from 100% is Rkatsiteli. It was fermented on the skins so its color is a darker yellow, almost orange color.  It was aged in a clay vessel and only 500 cases are produced each year.  This is a very intriguing wine, reminding me of Gravner's amphora wines.  It is a bit tannic, and has a fascinating taste of herbal notes, dried fruits, and mild spices. Cinammon coated apricots immediately came to mind.  The finish was long and interesting and I was enthralled with this wine, especially at this price point.

Overall, these wines presented a unique flavor profile, that though may seem familiar in many ways, will also offer at least hints of exoticism.  These wines are often also value wines, considering the quality of the wines especially in comparison with similar wines.  I most enjoyed the wines aged in clay vessels.  I would recommend all of these wines, and I will be seeking out more information about Georgian wines as well as trying to taste more and more of them.
Posted by Richard Auffrey at 4:00 AM

What corner of the earth have you left uncovered at this point? :-)

Very interesting notes. I have just been to a tasting with wines from Pheasant's Tears, another Georgian winery. They just work with traditional methods and use qvevri for all their wines.