Getting Naked in Brighton 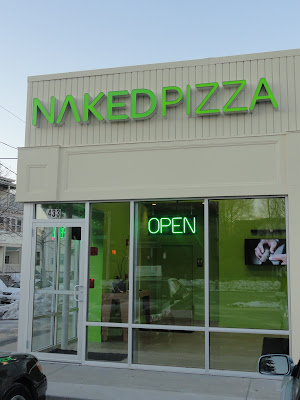 Does the Boston area need another chain restaurant which specializes in pizza?  There already are plenty of pizza places, from small independent stores to larger chains like Domino's and Pizza Hut.  Any new pizza chain would have to offer something special if it hoped to compete with all of the existing places. Does the new Naked Pizza provide something unique, which will enable them to successfully compete in the tough pizza market?

I, and a number of other food bloggers, were recently invited to visit the new Brighton location of Naked Pizza, the first in the Boston area. Another store is now also open in Brookline, with plans for several other locations in the works.  The Brighton location has its own free parking lot so it is very easy to stop by and pick up a pizza.  That is certainly an initial good point in the restaurant's favor.

Naked Pizza is a takeout and delivery place, not a sitdown location, and there are no current plans to add seating to the location.  Even if any seating is eventually added, it will very likely be very limited.  Naked Pizza is intended to compete with the major pizza chains, like Domino's and Pizza Hut, rather than the small independents.  They try to differentiate themselves from these chains by offering a healthier and more natural pizza.  Plus, obviously they want to offer top-notch service and be competitively priced. 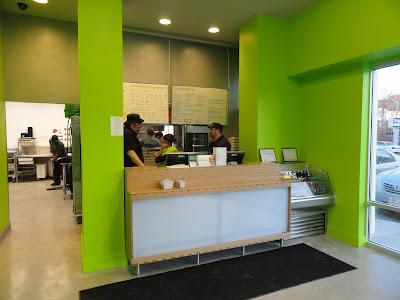 The menu is relatively simple, consistently mainly of pizza.  They sell three sizes of pizza: 10 inch for $6.99, 12 inch for $7.99 and 14 inch for $8.99.  In general, those prices seem lower than the average price at the other pizza chains (barring any "special offers").  For example, Domino's generally sells their 14 inch pizza for $10.99, making the Naked Pizza $2 cheaper.  Naked Pizza also sells a Gluten Free pizza, only in the 12 inch size for $9.99.  Besides their regular crust, you can also get a Skinny, thin crust, pizza.

There are about 23 different toppings you can get for your pizza, including veggies, herbs, meats and cheeses.  Interestingly, the toppings for their pizzas all cost the same, dependent on the size of the pizza.  For a 10 inch, they cost $1.49 each, for a 12 inch, $1.69 each and for the 14 inch, $1.89 each.  This is considered necessary for their economies of scale, though it also means you might find some of the toppings to be unfairly priced compared to the others.

For example, should red onion or basil really cost the same as ham or sausage? I don't believe they should, especially when they cost the restaurant much differently. I would rather see a few different price levels for the toppings to make the prices more fair, such as grouping all the meats together under one price and having a different price for the veggie toppings. 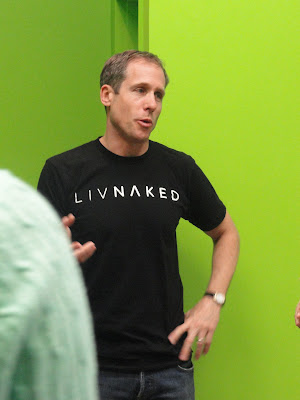 I spent some time speaking with Peter Biro, the co-founder and CEO of Third Slice, the New England Developers for Naked Pizza.  He is also a co-founder and partner in Massachusetts Burger Enterprises, LLC, one of the nation's largest franchisees of Five Guys Burgers and Fries (which will be opening a location in Stoneham in a few months).  Peter possessed a passionate spark and I could discern that he truly believed in his product.  He freely answered all of my questions, and I did not feel like he was trying to conceal anything.  Just upfront honesty.

We discussed the nature of the ingredients used for their pizzas, how their goal is to use only as natural ingredients as possible, though still dealing with issues of price.  As I have mentioned numerous times before, natural and organic ingredients can often be more expensive, so Naked Pizza tries to find a fine balance, keeping their prices reasonable but also offering a superior, natural product.  Based on everything I viewed, I think they are doing a good job in that regard.

It is also important to Peter that Naked Pizza treats its employees well, such as paying them a fair wage and providing good benefits.  In addition, Peter wants to give back to the community. He wants to be a responsible employer, as well as a responsible member of the community. 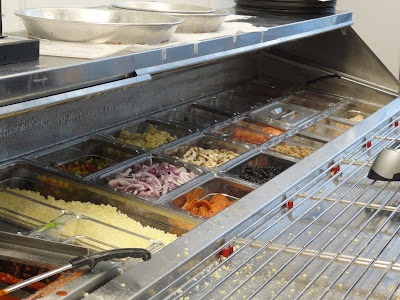 Their pizza dough contains about ten ancestral grains and seeds, including amaranth, brown rice, buckwheat, oats, quinoa, spelt, tapioca, teff, and two kinds of wheat. The pizza also includes prebiotics and probiotics, which are supposed to contribute to better health.  The tomato sauce is simple, made from only tomatoes, water and herbs, and the cheese is a skim-milk mozzarella. You won't find in their pizzas any additives, preservatives, colorants, added sugar or other strange chemicals.  All of the toppings are supposed to be natural as well.  For example, their pepperoni contains paprika rather than nitrates for coloring.

All of this does make Naked Pizza more unique from the major pizza chains. Some of these matters are clearly better for you, the more natural ingredients and the avoidance of added chemicals.  Some of the matters are more questionable, unless you conduct more research of the issues, such as the effects of prebiotics.  The average consumer won't understand the nature of prebiotics but if you check out the Naked Pizza blog, they provide much more information about these health issues.  It is also important to note that the Gluten Free pizzas have their own prep areas so there is no possible contamination. 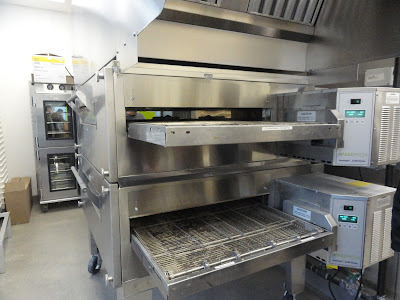 It takes about 3 1/2 minutes to prepare the pizza before it enters the oven.  Their special oven can reach temperatures of 1100 degrees, and the conveyor system allows the heat to work evenly on both the top and bottom of the pizza. It only takes three minutes to cook a pizza in this oven, so it takes less than 7 minutes total to make any pizza. Thus, they can provide quick service for you. 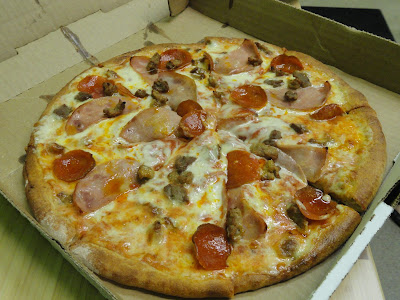 But, at its most basic, it is the taste of the pizza which will ultimately make or break Naked Pizza.  It does not matter how natural or healthy the pizza, unless it also tastes good then it will fail.  I had some initial trepidation about the pizza, because there are numerous multi-grain products which don't appeal to me.  They have too much of a grainy taste, tasting more like horse feed than something people should be eating.

I began with the Farmvil, one of their Favorites which contains pepperoni, sausage, hamburger, and ham (Canadian bacon).  There was a good portion of toppings and plenty of cheese. The crust was crisp and crunchy, with a mild grainy taste which was pleasing rather than off-putting. It certainly was not like horsefeed, and gave the crust a more unique taste as compared to pizza crust from the other large chains.  Overall, it was a very tasty pizza, one which should appeal to most pizza lovers. Pizza is one of my favorite comfort foods, and Naked Pizza makes one which satisfies my palate. 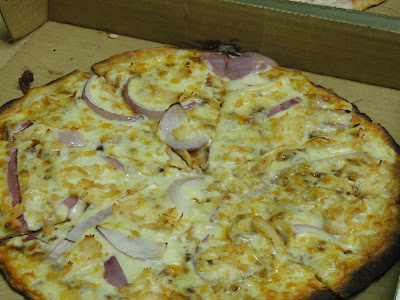 The Smokehouse, another Favorite, has hickory-smoked BBQ sauce, onion, and chicken and we got it with the Skinny crust.  This too was quite delicious, with a nice tasting BBQ sauce and a thin, crisper crust. I liked both crusts equally, and I guess which one I chose would depend on my mood. 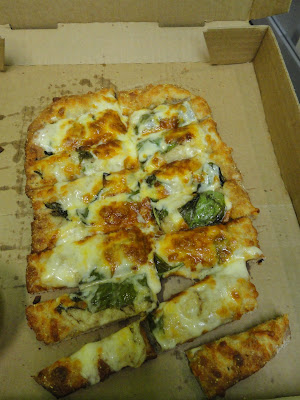 The Mojomega Breadstixx ($5.99) use the pizza dough, topped with mozzarella, cheddar and basil.  As I enjoyed the pizza, these were easy to like too. Plenty of cheese, tasty dough, and they were not greasy.

Overall, Naked Pizza offers a compelling, delicious and natural pizza, and it should be very competitive with the other large, pizza chains. So I do recommend you try their pizza. My only concern is with some of their pricing which I think needs some fine tuning. First, they need to adjust some of the prices of their Favorites, those which are over priced for the number of ingredients.  Second, they should not charge the same price for all of their ingredients, as that type of pricing overcharges for some ingredients as compared to others. For example, it should be relatively easy to provide 3 different price levels for the ingredients.

Have you eaten at Naked Pizza?  What were your thoughts?

I paid Naked Pizza a visit last night with some other local bloggers, and I was really impressed. I'll be posting my review soon, but the passion from the owners alone made this place something special. Great review!

Awesome naked Pizza! I think in order to make a pizza tastier, one must take care of the base, it should be standard or thin, and then you can move further and make it tastier. I made a pizza at home with tomato and basil sauce and mozzarella. A pizza in Brighton is something we need to taste.