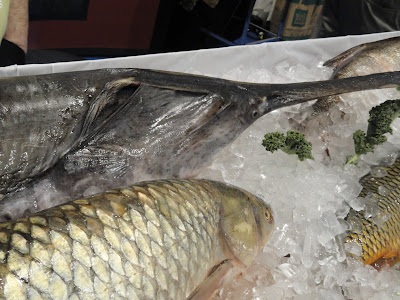 While attending the International Boston Seafood Show, I also had the opportunity to peruse the New England Food Show, which is a tradeshow for the food and restaurant industry. They were located in adjacent exhibit halls so it was easy to come and go between the two shows.  How did the two trade shows compare?  Let me try to briefly compare and contrast based on my post, Ten Things You Should Know, about the Seafood Show.

I now want to highlight several items which most impressed me at the Food show. These are items I recommend that my readers check out. 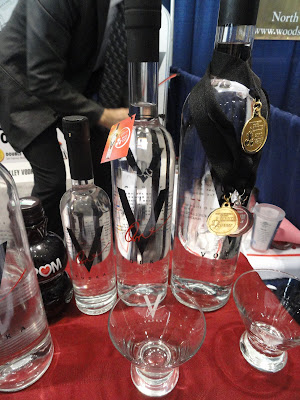 I am very selective in my vodka, especially as I often drink it just on the rocks. So I was initially skeptical when I came to the V-One Vodka booth. Its creator, Paul Kozub, lives in Shrewsbury, Massachusetts, and made this vodka in honor of the memories of his father and grandfather. His grandfather had produced vodka in Massachusetts during prohibition, and those stories were passed down to Paul. The vodka is now distilled in Poland by Stock Polska/Polmos Lublin, a distillery which has been manufacturing its own vodka since 1906.

One of the key differences that separates V-One from other vodkas, is that it is produced from 100% Spelt, an ancient wheat variety that may extend as far back as 6000 B.C., and is somewhat the grandfather of modern wheat. In Polish, spelt is known as orkisz.  Spelt was introduced into the U.S. in the 1890s, but eventually was replaced by bread wheat, which also occurred in most other parts of the world.  But spelt is making a slow comeback and you can find it in some organic food sections.

Because it has a tougher and thicker husk than wheat, it may possess more nutrients, which receive protection from the extra husk. But, that husk comes with a price, a smaller seed which means the yield is smaller.  The protein in spelt may be easier to digest than other wheats. Tastewise, spelt has a nuttier and slightly sweeter flavor than whole wheat flour.

Paul grows about ten acres of spelt in Shrewsbury, and the rest of the spelt comes from Poland. Spelt is not cheap, and it costs about three times as much to produce a spelt vodka as opposed to other luxury vodkas. Despite that fact, V-One sells for about $25 for a 750ml bottle, making it cheaper than other luxury vodkas such as Grey Goose and Belvedere. Yes, scratch your head over that one as the vodka which is more expensive to produce cost less than other which are cheaper to produce.  V-One is also hand-crafted in small batches and distilled five times.

But what about the taste? It had a very muted aroma, and was incredibly smooth in my mouth with a hint of herbality and mild bitterness on the finish. The bitterness was pleasant rather than off-putting, and it had a very clean and pure taste with subtle notes of almost almond. This is exactly the type of vodka which I would drink on the rocks, smooth and clean. It was an impressive vodka, and certainly better than some other luxury vodkas which are more expensive. And at its price, it also is a very good value for a vodka of such high quality.

If spelt can make such excellent vodka, then more producers should be using it. 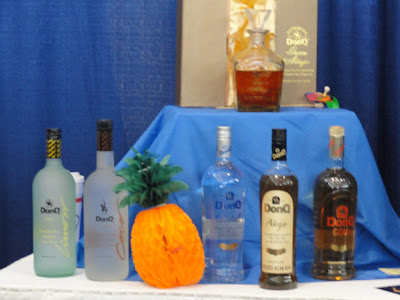 From vodka to rum, my spirits journey continued. Though I was aware of the DonQ Rum brand, I had not tasted it before. DonQ Rum comes from Puerto Rico, and its history extends back to 1820 when Juan Sebastian Serrallés, a Spaniard, settled in Puerto Rico and established a sugar cane plantation. By 1865, the Serrallés family was producing rum and in 1934, the DonQ brand was launched.  The DonQ brand was relaunched in the U.S. in 2006.

DonQ produces four straight rums and four flavored rums, and I got to taste all of them. The straight rums included the Cristal (aged 3 years), the Gold (aged 5 years), the Anejo (aged 8 years) and the Gran Anejo (aged 12 years). The Cristal is aged in American White Oak barrels and undergoes multiple distillations to make it smoother. They succeeded as this was a silky smooth rum, with no harsh bite, and a very clean taste. I could drink this on its own, or use it in cocktails. The Gold was richer, with a bit of a smokier flavor, and was equally as smooth as the Cristal.  The Anejo was once again silky, with a more complex melange of flavors, including a bit of smoke, caramel, vanilla, and almonds. The Gran Anejo was superb, like a fine scotch, something to be slowly savored. It was complex, very smooth and its finish just lingered on and on on your mouth. The Gran Anejo will thoroughly impress any rum lover.

As all but the Gran Anejo cost under $20 a bottle, they are excellent values. The Gran Anejo is around $70 a bottle, and I believe it is worth the price. I cannot recall the last time I have gone through a rum company's entire lineup and really enjoyed each and every one of their products. Most companies have at least one or two lesser end products that taste too harsh, but none of the DonQ rums have that problem. I could easily drink any of the DonQ rums straight and I highly recommend all of these rums.

I was not as impressed with their flavored rums, primarily because most of them were too sweet for my preferences. Their flavored rums include Coco, Mojito, Pasion, and Limon.  Out of the four, I enjoyed the Coco the most, which had a strong coconut flavor yet was not overly sweet. Properly mixed in a cocktail though, these flavored rums might shine better. 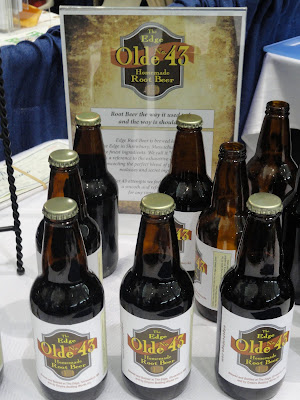 The Edge is an old-fashioned diner in Shrewsbury, Massachusetts, a place for hot dogs, burgers and similar dishes. Plus, they make their own root beer, Olde No.43 Homemade Root Beer. Over a period of six months, they tried numerous root beer recipes, allowing consumers to help taste test the results.  Finally, they came upon what they felt was the best recipe, and they bottled Olde No.43. This is one of those beverages best sipped ice cold, and at the restaurant you receive a frosted mug. It had that old style root beer smell, and tasted like it as well, an intriguing herbal taste, without the syrupy sweetness of many modern root beers. It was not overly carbonated either, being more refreshing than many other modern brews. This would be perfect on a summer day, bringing you back in time, to a less processed era. Maybe I need to take a trip to Shrewsbury to check out the Edge restaurant. 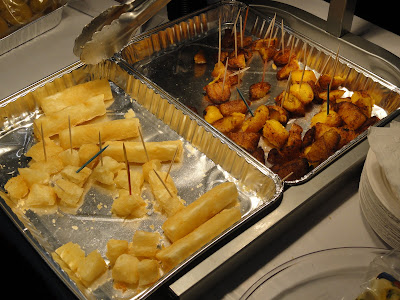 Rather than the usual French fries, why not try some fried yuca?  MIC Food sells tropical and Caribbean food products, and I got to sample two of them: fried yuca and fried plantains.  These were essentially frozen packs, which are very simple to prepare. For example, the yuca are actually precooked and need only about ten minutes to prepare at home. I enjoyed the taste of both, and think it would be difficult to know that they once had been frozen. The yuca were not tough like some I have previously had, having a crisp exterior and more fluffy interior, and the plantains had a nice sweetness to them.  If I see these in the supermarket, I will buy them. 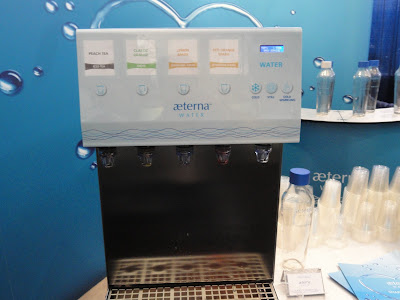 Why mention a water and drink dispenser? Well, this machine really impressed me.  Aeterna Water sells a variety of water and drink delivery systems, for homes and businesses. It is also a very ecologically friendly business, endeavoring in numerous ways to be as "green" as possible. The systems purify your water, as well as chilling it if you desire. Now, when I drink water, and a number of other beverages like iced tea, I like it to be ice cold. Ice is ok in some situations, though it can dilute some beverages. And ice can take time to chill your drink to the temperature you desire.

But when I tasted the water directly from the above machine, it was perfectly chilled.  Absolutely thirst quenching and exactly how I would want my water all the time. It also had a clean, pure taste. The above machine also had carbonated drinks and peach iced tea. The Classic Orange was once again perfectly chilled and not overly carbonated. Those Poland Spring water dispensers cannot compete with the Aeterna. I don't know the costs of the Aeterna systems though, which might be an obstacle to some. But due to the quality of their product, I will be investigating them further. 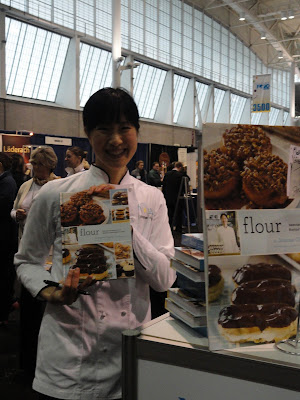 Chef Joanne Chang, of Flour Bakery and Myers+Chang, made an appearance at the Food show, autographing her new cookbook: Flour, Spectacular Recipes from Boston's Flour Bakery + Cafe. This is an excellent cookbook and you can look for a review of it from me in the near future.
Posted by Richard Auffrey at 4:00 AM

Good seeing you at the Show - I agree with your comments on the DonQ rums - they have an excellent lineup and are a welcome addition. Did you taste the wonderful Riazul tequilas at the other end of the Food Show? Trukly a treat.