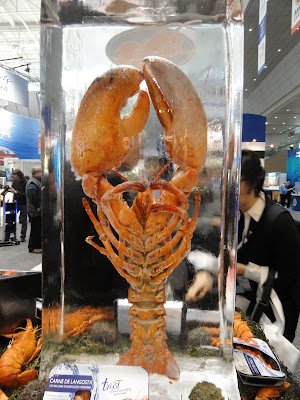 I think I am going through seafood withdrawal today as I am not at the International Boston Seafood Show.  But I can savor my memories from the past two days, and relive it through my photos, even if it is only a photo of a fish head. Plus, I have a ton of literature to sort through and peruse.

On Sunday, I posted an article, Ten Things You Should Know about the Seafood Show, to give my readers a greater picture of its scope and diversity, and maybe motivate you to check it out.  But, after my second day there, and more pondering about the show, I realized there is even more that I felt I should share. So, here is a supplement to my original post, adding five more intriguing elements about the Seafood Show. It may be too late to go to this year's event, but you can always plan ahead for next year. 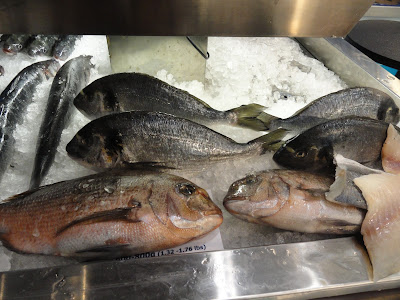 1. The Gulf oil spill is not a significant concern.
I spoke to a number of Gulf based exhibitors, asking them about whether the tragic Gulf oil spill was still affecting their industry and products.  Every one of them stated that the problems were essentially over, that all of the fisheries were open, and that consumers had no reasons to fear seafood from this region. Now, it might be easy to have a bit of skepticism about their claims, as obviously they want to sell their products and scaring consumers won't help in that regard. But those individuals I spoke to seemed very sincere, answered my questions directly, and I did not detect any evasion or attempts at deception. I felt more secure about Gulf seafood, so that was a good lesson to learn. 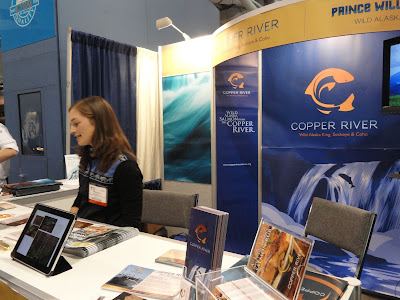 2) Salmon is king.
The most ubiquitous fish of the entire show was definitely salmon, both Atlantic and Pacific. More exhibitors were showcasing salmon than any other seafood, though cod was a close second.  From Copper River Salmon to the Kwik'pak Fisheries, you could find salmon in a diverse mix of preparations, from sashimi to jerky. I love the taste of salmon and it seems many others do as well.  Plus, salmon is one of the healthiest fishes you can eat, rich in Omega-3s, so that is added reason why it should be so popular. Long live salmon! 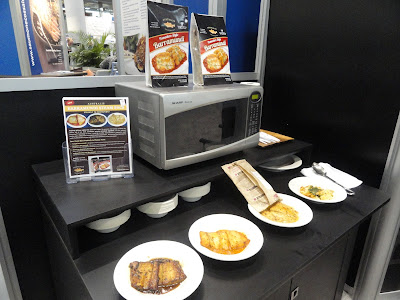 3) Frozen fish products were ubiquitous.
Though you might think a seafood show is all about fresh fish, I found many exhibitors showcasing frozen seafood products, ranging from frozen fish fillets to prepared dishes. Many of the samples I enjoyed were frozen, prepared dishes which they heated up and served.  Crab cakes, lobster macaroni & cheese, seafood arancini, seafood ravioli, battered fried shrimp, and much more. I can understand the reasoning behind this, as many people want to eat healthy seafood, but in their busy lives they don't always have the time to prepare a meal from scratch. Thus, it is much easier for them to pop a frozen, prepared seafood entree into the oven. And with an increase in frozen seafood products made from more natural and sustainable ingredients, you can feel even better about them. 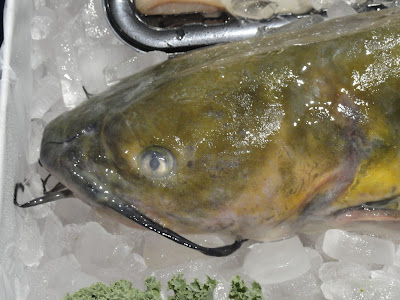 4) Recipes were ubiquitous.
For cooks and chefs, you could find an abundance of seafood recipes at the various booths. Some provided index card-sized, single recipes while others provided sheets with multiple recipes. For example, the Louisiana Seafood passed out cards with recipes for Oyster Milk Soup and Alligator Sauce Picante. Others passed out small books, chockful of recipes, such as Fresh Ideas for U.S. Catfish and Mississippi Shrimp Recipes. You could easily come out of the seafood show with hundreds of new seafood recipes, to keep you busy all year round. Plus, you got to sample a number of those recipes making it easier to determine which recipes you wanted to try at home. 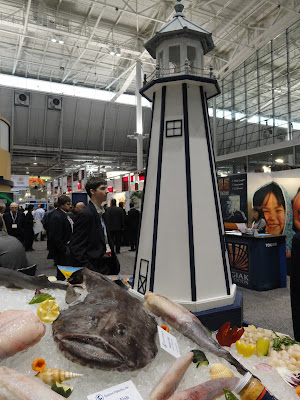 5) Schwag was ubiquitous.
Besides recipes, lots of exhibitors were offering free schwag, from pens to cups, from pins to carrying bags. It is certainly customary now at these trade shows for companies to offer such items, in efforts to promote brand awareness. And I saw plenty of attendees delighted to pick up the schwag, grabbing the pens and other items. Though the actual utility for the companies of some of the items escapes me. How many people will actually wear the pins again? I doubt many will do so. As for the pens, they seem more for the individual and I don't see brand awareness spreading too much from them.  Now the carrying bags I can understand, especially as so many people use them now. They carry a company logo and will be seen by many other consumers, so they seem one of the best bangs for the buck.

If you attended the Seafood Show, is there anything else people should know about it?
Posted by Richard Auffrey at 11:30 AM