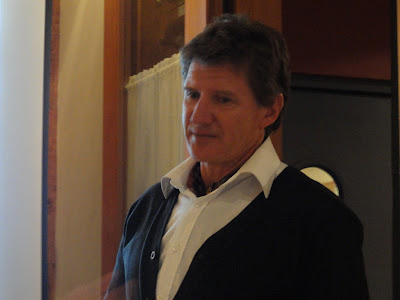 Who would have thought? While attending a seminar on South African wines, I learned of an inspiring love story, a romance to stir even the coldest of hearts. Plus I tasted some delicious wines. And though I will recommend the wines, I will recommend even more strongly that you learn the story behind the winery, Muratie Wine Estate.

The seminar, held at Les Zygomates, was led by Rijk Melck (pictured above), the owner of Muratie.  The winery is one of the oldest in South Africa, and is located in Stellenbosch, in the Simonsberg region. They were also the first winery to plant Pinot Noir in South Africa. Rijk was a compelling speaker, and I was fascinated by his history lesson of the region and winery.

In 1652, the Dutch established the colony of the Cape of Good Hope in South Africa, which was during the height of the slave trade. At one point, the Dutch captured a Portuguese slave ship and some of the slaves ended up in the Cape's Castle. The slaves were often permitted to walk around the gardens and market area during the day, before being locked up at night. One of those slaves bore a girl named Ansela.

In 1658, Laurens Campher, a German soldier working for the Dutch East Indian Company, was granted a farm at the foot of the Simonsberg Mountains, about 40 kilometers from the Cape. Now Laurens had also fallen in love with Ansela, though they had to keep their forbidden love secret. With extreme devotion and passion, Laurens regularly visited Ansela, which entailed a three-day walk on foot. For fourteen long years, Laurens made this journey, and Ansela bore him three children, though she was still a slave. Laurens surely loved Ansela, proving it with such dedication.

Finally, in 1699, Ansela received a Christian baptism and was then freed, the culmination of her dreams. Ansela and her children moved in with Laurens at what would become the Muratie estate. Grape vines had been planted on the estate and Ansela helped to ensure the estate was successful. The passion and devotion of Laurens and Ansela has reverberated throughout the centuries, helping to transform Muratie into a very successful winery as well as providing great inspiration. 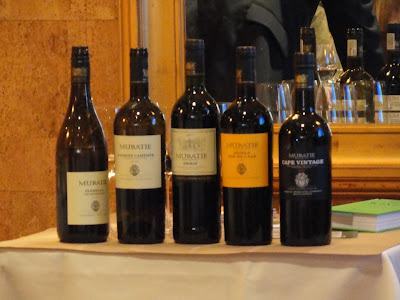 Now lets travel to the present, to understand a bit about the Muratie Winery. The winery is not organically certified, but does follow the Biodiversity in Wine Initiative.  In addition, they do not use pesticides, choosing instead to use animals, such as geese and wasps, to assist in pest control. (And also have two German Shepherds, named Frank Zappa and Stella Artois.) All harvesting is done by hand.  Their wines are imported by Worthwhile Wine Company and locally distributed by Masciarelli Wine Company.

We got to taste five Muratie wines, and all were very good, showing a clear minerality.  Rijk stated that they are not trying to make either Old World or New World wines.  Instead, they are making wine that reflects the soil, their terroir, and the wines actually seem to be somewhere between the Old and New World styles. In general, Rijk states their wines are elegant, with good acidity, minerality and a long finish.  In addition, all of their wines are made to be accompanied by food.

The 2009 Muratie Isabella Chardonnay is produced from 100% Chardonnay, which has spent nine months in French oak, only 40% new. The grapes come from three different vineyards, each picked at different times to emphasize different elements. For example, one group is picked early for more acidity.  The wine is named after Rijk's daughter, Isabella. The wine is full-bodied, with some creaminess, and flavors of smoke, citrus, lemon and minerality. It was an intriguing wine, a bit different from many other Chardonnays, and would be a great option this summer.

The 2010 Muratie Laurens Campher White Blend is a mix of 39% Chenin Blanc, 32% Sauvignon Blanc, 24% Verdelho and 5% Chardonnay. This had an exotic taste, with flavors ranging from grapefruit to pineapple, and some floral notes. It was crisp and refreshing, with a strong minerality backbone, and a moderately long finish. Another good choice for the summer and I would like to try this with some fresh seafood.

The 2007 Muratie Shiraz is made from 100% Shiraz, from 16-18 year old vines. It spent about 16 months in 90% French oak and 10% American oak. This was a strong but not overpowering wine, with delicious spice and black fruit flavors, and underlying herbal elements.  The tannins were moderate and the finish was long and satisfying.

The 2007 Muratie Ansela van de Caab is a blend of 48% Cabernet Sauvignon, 37% Merlot, 12% Cabernet Franc and 3% Shiraz. This wine spends about 18 months in French oak. This wine is more tannic than the Shiraz, with strong flavors of black fruit, cigar box and cocoa. Plus, it had more minerality than the Shiraz. This is a wine that cried out for a thick steak.

The 2008 Muratie Cape Vintage is an intriguing blend of Tinta Barocca, Tinta Roriz, Tinta Francesca, and Souzao.  Muratie is the only winery in South Africa to use most of these grapes, except for the Tinta Roriz. This is a Port-style wine, aged for two years in old French barrels. It has a mild sweetness, with some notes of black cherry candy, but combined with dark spices. It possesses a good acidity as well as a pleasant and long finish.

Let me finish with another inspiring tale of Muratie. Rijk is a medical doctor, who worked for a time in England before returning to South Africa in 1980. At that time, most doctor offices had two doors, one for whites and one for blacks. Rijk though refused to do so, having only a single door for his practice. It can't have been easy to oppose the norm, yet Rijk stood his ground, opting for what was morally right.  That too is inspiring and commendable.
Posted by Richard Auffrey at 4:00 AM