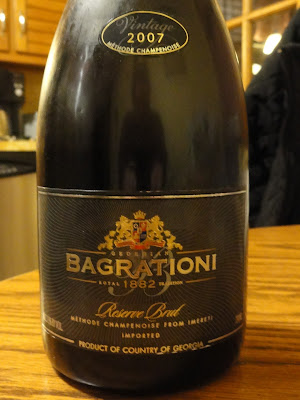 The winery extends back to the era of Georgian Prince Ivane Bagrationi-Mukhraneli, around 1882, who began producing sparkling wine using the classic bottle fermentation method. Currently, they produce sparkling wines in both the Methodé Champenoise and Method Charmat methods.  They are the primary producer in Georgia, occupying 80% of the domestic market, and now export four of their wines into the U.S., including the Classic Brut, Classic Extra Dry, Reserve Brut and Royal Cuvée Brut.  They are also the only sparkling wines made in Georgia which are available in the U.S.

The Bagrationi 1882 vineyards are located in the Kartli, Imereti and Kakheti regions of Georgia. The grapes they use include three indigenous grapes: rare Chinebuli from the Kartli region, and Mtsvane & Tsitska from the Imereti and Kakheti regions. Chinebuli, also known as Chinuri, and Tsitska, are used primarily for sparkling wines while Mtsvane is often used for still wines. I was very curious as to what kind of sparkling wine these unusual grapes would produce.

The Vintage 2007 Bagrationi 1882 Reserve Brut ($19.99) is produced from Chinebuli, Mtsvane, and Tsitska, though I am unsure of the actual percentages.  The wine is produced in the Method Champenoise and has an alcohol content of 13%. I brought this bottle to a wine tasting over at my friend Adam's house, and it was very popular.  The most common comment, of which I fully agreed, was that this wine had a strong minerality, almost a steely nature. The fruit flavors, some peach and melon, were subdued but noticeable.  There was good acidity, and it was clean and refreshing. At this price point, I think it is a very good value and presents a sparkling wine with character. It had its own uniquenness and is well worth seeking out.

The Bagrationi 1882 Classic Brut ($9.99) is also produced from Chinebuli, Mtsvane, and Tsitska, though I am again unsure of the actual percentages. This sparkling wine though is produced in the Charmat method and has an alcohol content of 12%. I enjoyed this wine, though not as much as the Reserve, and it did have a different flavor profile.  There were more bubbles, less minerality, and more fruit flavors.  The minerality was still noticeable though more muted, and the fruit tastes included some peach, melon, and lemon. It tasted less exotic than the Reserve, but at this price point it is a good choice for a sparkling wine.

Both of these wines are available in Massachusetts, and the distributor is Select Wines. I would strongly recommend you buy the Reserve Brut.
Posted by Richard Auffrey at 3:00 AM

I enjoyed these too.
But I'm a total sucker for bubbles of any kind.
Cheers to you!