Loving Lamb at the Charles 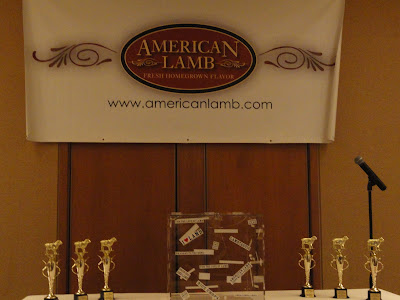 Lamb seems to be a very polarizing meat, one that you either love or hate.  There is little middle ground with lamb, and it is curious why it invokes such strong emotions in people.  It might have to do with the gamey flavor you sometimes taste with lamb, which may be too intense for some people.

I am a lamb lover though, so was eager to attend the Second Annual Lamb Jam, held at The Charles Hotel.  The Boston event was a partnership between the American Lamb Board and BostonChefs.com, and over 500 lamb lovers came out to enjoy a diverse selection of dishes.  Seventeen local chefs competed at the event, each offering an interesting, and often tasty selection for the attendees.  There were representatives from eight beer brewers and wineries from Paso Robles and Washington. Plus, there were tables for Cabot Cheese, Lovin' Spoonfuls, Harvard Sweet Boutique and others.

The chefs competed in four cut categories: leg, loin, shank and shoulder and shank.  The winner moves on to compete against chefs from San Francisco, Seattle, and Washington, D.C., at a New York Jamb Jam Cook-off in September. 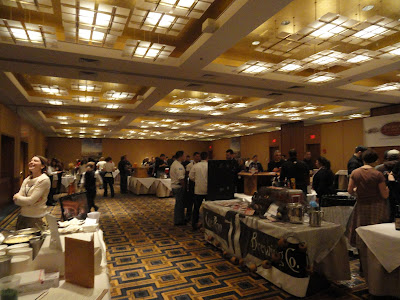 Overall, the event ran well and in general, was much less crowded than similar food festivals.  There was about a thirty minute block when the event was packed, and it became very difficult to maneuver through the crowds.  But, the crowds lessened once the butchery demo began.  It may have helped that there was a secondary room where attendees could sit and eat, thus lessening the crowds in the main hall. 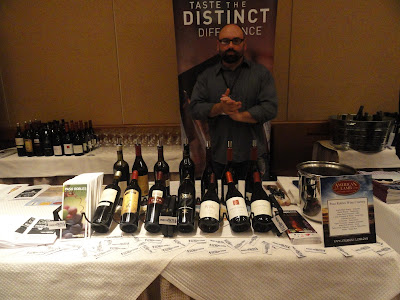 Though I am not a fan of beer, the brewery tables appeared very popular.  More to my liking, there were tables with wines from Paso Robles, California (pictured above) and Washington. After my last year's trip to Paso Robles, I have become very partial to their wines and was glad to see some of their wines here. The 2009 Austin Hope Grenache ($42), 2007 Halter Ranch Cotes de Paso ($28), and 2008 Robert Hall Syrah ($18) all were very good wines, especially paired with the lamb dishes.  The Austin Hope was especially compelling, with an alluring nose and an intriguing melange of flavors, with dominant spice notes.  Paso Robles continues to work magic with Rhone grapes.

The Washington wines had some winners as well.  My two favorites were the 2009 Tamarock Cellars Cabernet Franc ($25) and the 2006 Hestia Cabernet Sauvignon ($35). The Tamarock was a big wine, lots of black fruits and spices, and no vegetal taste at all.  Just my style of Cab Franc. The Hestia was a smooth, easy drinking Cabernet, with mild tannins, blueberry and plum flavors and hints of spice. Again, both were nice choices for lamb. 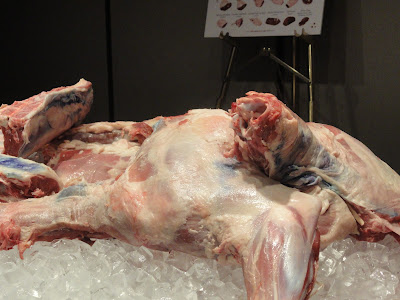 If you were squeamish, then you probably didn't attend the lamb butchery demo, which was conducted by butchers from Tavolo and The Meat House. But, if you enjoy meat, you should attend such demos, to learn more about the food you eat.  If we are willing to enjoy meat, we should not hesitate to see it in its unprocessed state.  We should gain a deeper connection to our food, so I am glad to see more and more of these demos at local food events.

I did not taste every dish at the Lamb Jam, but did get to enjoy many of them.  I regret missing out on trying Chef Santos's winning Poached Lamb Loin. I will discuss though some of my most enjoyable lamb dishes, including a couple that did win prizes. Probably my favorite dish of the event was prepared by Chef Jim Solomon of The Fireplace, a New England Grill in Brookline.  He made a Braised Lamb shank with sheep milk cream over winter squash stew and cheesy cornmeal porridge.  The dish was extremely flavorful, with plenty of tender, savory meat and the porridge was also quite good. A hearty, winter dish, this was very satisfying and worthy of its win. It also perked my interest enough to want to dine at The Fireplace. 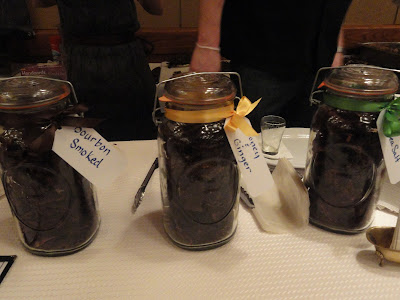 Another of the winning dishes belonged to Chef Brian Reyelt of Citizen Public House, his Lamb Jerky 3 Ways: whisky smoked, honey ginger, and spicy & sweet.  The tender, albeit chewy meat (it is jerky), was strong on taste and each flavor was very different from the other. This would be a great snack anytime, and its varied flavors would satisfy most people. 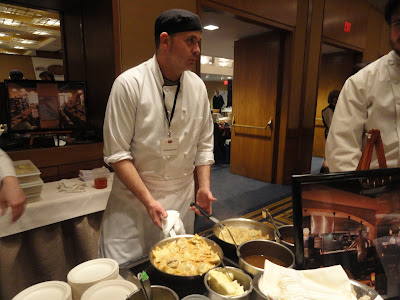 A few of the chefs chose to make lamb ravioli, which certainly garners my approval.  Chef Justin Melnick of Tomasso Trattoria prepared a delightful Ravioli con Agnello, braised lamb shank ravioli with mascarpone cheese. These homemade ravioli contained plenty of moist, flavorful meat with hints of sweetness from the mascarpone.  The ravioli was also topped with a dollop of mascarpone, adding a bit more sweetness without overwhelming the ravioli. 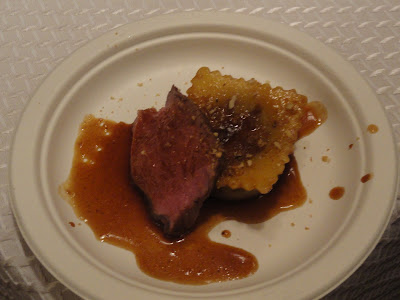 Chef Robert Sisca of Bistro Du Midi also created a delicious ravioli dish, the Cumin and Garlic Sous Vide Lamb Loin with braised lamb neck ravioli, baby carrots, pine nuts and lamb jus.  This home made ravioli was also well filled with scrumptious lamb, and had the addition of a perfectly cooked slice of loin. I could have devoured a large plate of these ravioli and loin slices. 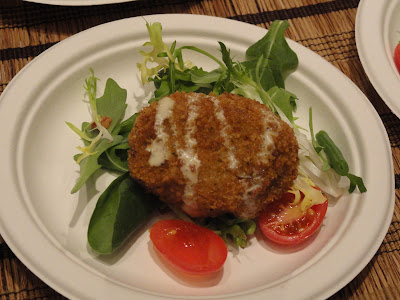 Chef Jody Adams of Rialto offered a delightful Lamb Scotch Egg with winter salad, bacon lardons, and truffle vinaigrette. The egg was surrounded by like a lamb sausage, and the entire item was deep fried with a nice, crunchy exterior.  The lamb was spiced well and it was a great snack, an excellent bar food. 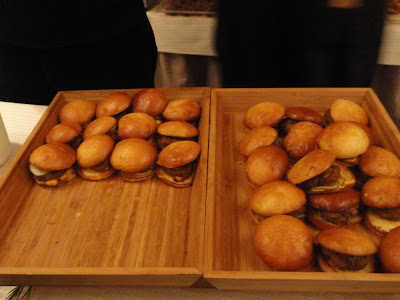 Chef Michael Scelfo of Russell House Tavern presented Merguez Sliders, with minted sweet pickles, smoked lamb belly vinaigrette, and a harissa ginger aioli. I really enjoyed these, except for the aioli (though that is only because I am not a fan of most aioli).  The meat was moist and flavorful, the pickles adding a  nice texture as well as a subtle sweetness and mint flavor. The roll was soft and fresh, and I would have enjoyed an even larger merguez burger.

Lamb, it is what should be for dinner.
Posted by Richard Auffrey at 4:00 AM