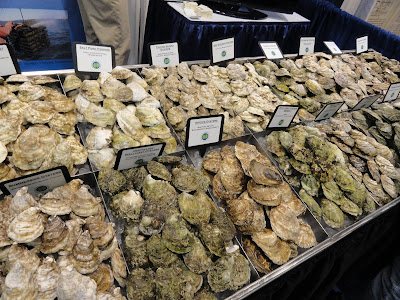 The International Boston Seafood Show ends today, but the results from this show will reverberate throughout the rest of the year.  Local retailers and restaurants will have new suppliers, bringing in new seafood products for their customers. Consumers will be able to purchase many of the seafood products showcased at the show. The knowledge gained at the show will support future seafood-related endeavors, and help more people towards sustainability. And the effect will be more than just local but will be international in scale. The future looks more positive, and I am glad for that.

I have already told you Ten Things You Should Know about the Seafood Show, and then added Five More Things You Should Know and topped it off with The Key to Sustainability. I'll now end by showcasing some of the most compelling food I sampled at the show, and I certainly ate plenty.With all of the samples I tasted, I could not write about them all so I am only providing a sampling of some of the best. And then I will end with a couple miscellanous matters, and maybe that will even be a bit humorous. 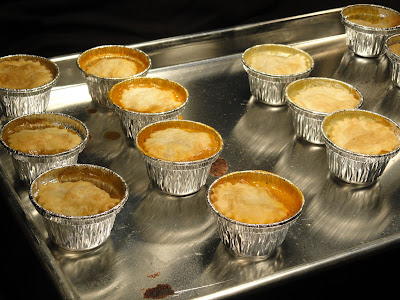 One of my most favorite foods of the show were Maristella's Fine Foods Seafood Arancini and Pot Pies. It was good to see that it is a family owned and local, Boston based, business and their name derives from that of a family fishing boat in Sicily. They will be selling four seafood pot pies, including: Wild Caught Shrimp & Andouille Sausage Gumbo, Wild Atlantic Haddock, Lobster with Saffron Scented Creamed Corn and Wild Alaskan Salmon with Horseradish & Chipotle. Above are just samples, and the actual pies will be 13 inches. I tasted both the Lobster and Salmon pies, finding the crust to be nice and flaky, and the interiors to be full of tasty fillings. The flavors were spiced well and fairly complex, not the simple blandness you might find in cheap pot pies. They would certainly make an easy and delicious dinner one night.

They will also be offering five types of seafood arborio rice arancini, including: Wild Caught Blue Crab with Gorgonzola Cheese & Applewood Smoked Bacon, Wild Alaskan Salmon with White Wine & Capers, Wild Caught Scallops with Applewood Smoked Bacon, Wild Caught North Atlantic Lobster with Sherry Cream Sauce and Wild Caught Shrimp with All Natural Pesto. I tasted the Crab with Gorgonzola, and found it to be filled with creamy and cheesy goodness, accented by a smoky bacon flavor. Another easy dish to prepare, maybe as an appetizer or side dish. 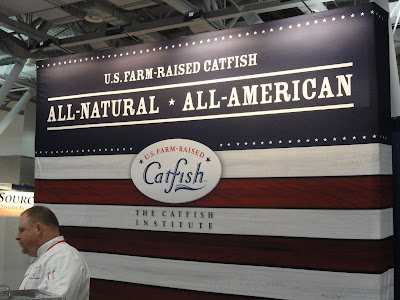 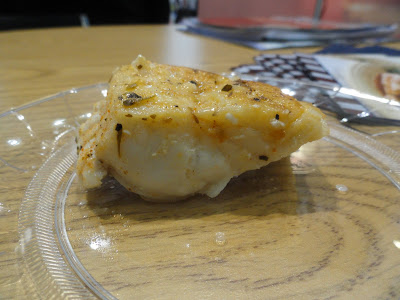 I have long been a fan of catfish, and it often is fried because the pieces are thinner than many other fish. It is also good to know that U.S. farmed catfish is a "Best Choice" by sustainable seafood organizations because it considered to be farmed in an ecologically responsible manner. The piece of fish above though does not look like the usual catfish you find on your plate, as it is much thicker and larger. Yet it is, a new type called the "Delicata," which is an older and larger catfish.  Because it is larger, and lacks that membrane found on other catfish, it is better suited to grilling or baking. It has a denser texture but the meat is still white, flaky and slightly sweet. This summer, you should look out for the Delicata and grill up some. 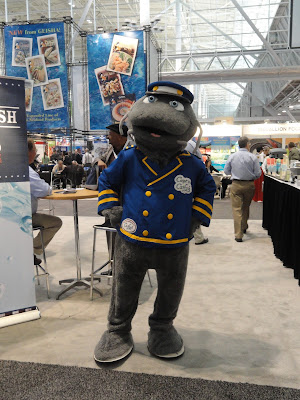 That is Capt'n Catfish, the official mascot of the U.S. catfish industry. 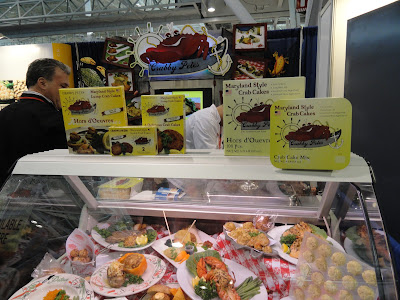 I tasted a number of crab cakes at the show, but one really stood out to me, the Crabby Pete's Maryland Style Crab Cake. Based in Long Island, New York, the family started out in 1994 supplying crab cakes to local food establishments.  What I enjoyed about these cakes were that they will filled with plenty of crab meat, and tasted lighter than many others, showing the lack of heavy fillers. The spices were nice, working with the crab rather than overpowering it. They would certainly impress your guests at a dinner party where you did not have the time to prepare your own crab cakes. 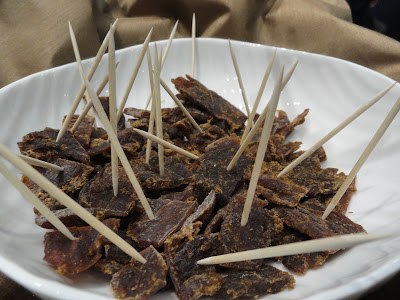 No, this is not a photo of a plate of beef jerky.  Instead, it is Tuna Jerky, made from individually caught yelllow fin tuna and imported by Maguro International.  It is supposed to be high in protein, low in fat, and rich in Omega-3s. I enjoyed the taste and texture, like a well made beef jerky but with more of a seafood flavor. Would be an interesting snack while watching a sports game or hanging out in your backyard. I bet a rich Junmai Sake would be an interesting pairing with this. 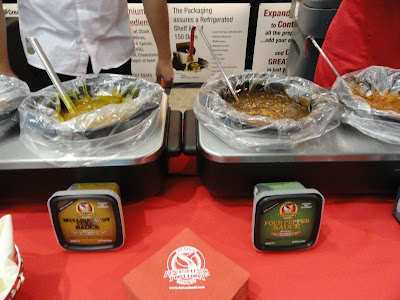 Rather than take the time to prepare your own sauce, sometimes a store bought sauce will do the trick, provided it tastes good.  Fortun's Finishing Touch Sauces seems like a good option to me.  They sell 12 different sauces, which are freshly made and all natural. They also are gluten-free and have no MSG.  All you have to do is heat the sauce and then pour it over your food, whether meat, pasta, rice or something else. I tasted four of their sauces, and the two which most stood out to me were the Asian Style Pepper and the Four Pepper.

The Asian Style Pepper is made with sake, oyster sauce, hoisin and garlic and does remind me of Asian cuisine. Probably would be good atop a stir fry dish.  The Four Pepper is made with colorful peppercorns, spices, Madeira and Burgundy wines. It was spicy, and seemed best for meat, especially steak. Both sauces had bits of vegetables or other ingredients in them. 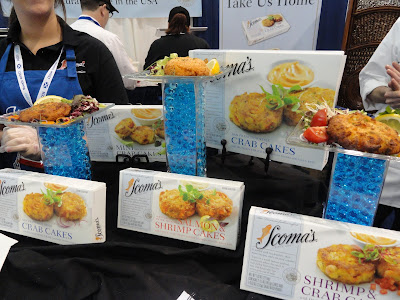 Scoma's Restaurant, a famous seafood spot in San Francisco, has entered the retail market with a new line of sustainable, all natural seafood cakes. The seafood cakes can be pan fried or oven heated in minutes. The cakes include: Salmon & Shrimp, Dungeness Crab, San Francisco Style Crab Cakes, Wild Pacific Sockeye Salmon Cakes, and Wild Pacific Northwest Shrimp & Crab. I liked the fact that the seafood was all sustainably caught.  Plus, they tasted very good, with lots of seafood in each cake and minimal filler. Again, another product that would impress at a dinner party if you did not have enought time to make them on your own. 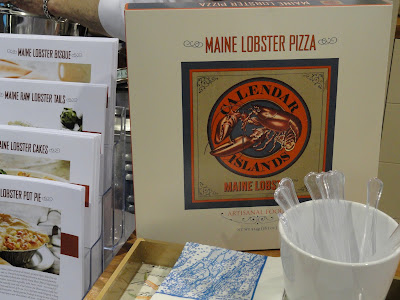 I didn't get to try their Lobster Pizza but the I did get to taste the Calendar Islands Maine Lobster Company's Lobster Corn Chowder. I have always enjoyed a good corn chowder and adding lobster to it only adds to the enjoyment. This was a tasty chowder, not too thick but with enough creamy consistency. There were tiny pieces of potato as well as some bacon (and what isn't better with bacon?). 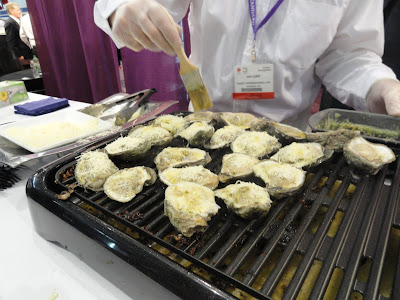 I had to stop when I saw these oysters being grilled in their shells.  The oyster was slathered with garlic butter and then sprinkled with a parmesan cheese blend.  Oyster purists may shudder but I found them quite delicious, with a strong garlicky taste.  The oysters themselves, Handy Gold Band Oysters, are a bit as they undergo a special high pressure processing which both preshucks and purifies the oyster.  So, you can buy just oyster meat, or frozen oysters on the half shell, or the "gold band" oysters. The gold bands come in a complete shell, to seal in the juices, but can be easily opened rather than the usual shucking. 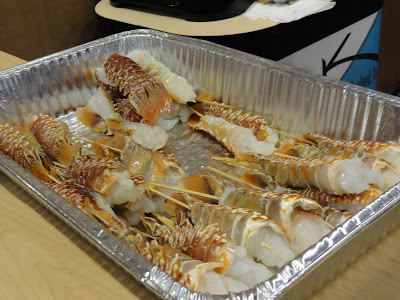 Sorry to say I did not get the name of this exhibitor, but they made a fantastic grilled South African Lobster Tail with a white truffle butter. It may not be a Maine lobster, but it still can be quite appealing. 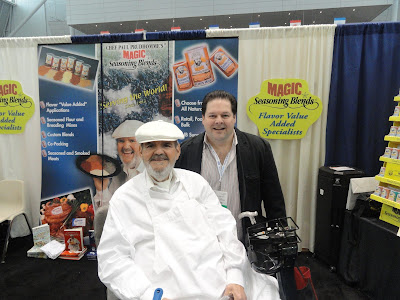 Famed Chef Paul Prudhomme made an appearance at the show, displaying his Magic Seasoning Blends, his books and more. At one time or another, most people have probably used some of his seasonings at home, and may still do so. They come in a variety of flavors, versatile enough to be a welcome addition in many different cuisines. It seems Chef Prudhomme is not someone who chooses to rest easy at home on his past glories, but rather someone who still gets out to meet the people.  That was an inspiring sight to me. 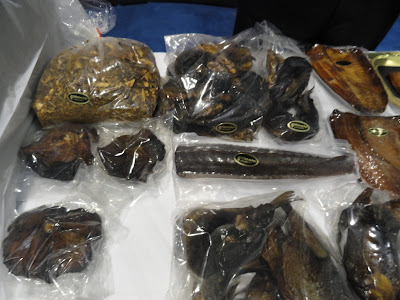 This was bit of an oddity, smoked fish from the African coast off Nigeria. Schafer Fisheries, a family owned business in Illinois, is one of the few companies bringing this seafood into the U.S. I did not get to taste it, but it sure perked my interest. 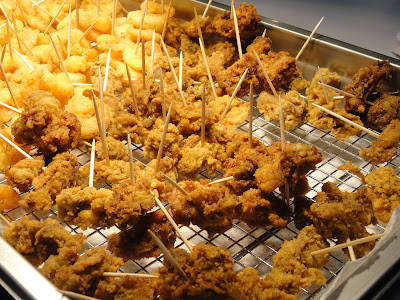 These Mississippi Fried Oysters were addictive, and I had to pull myself away or I would have stood there and chowed down a couple down of them. 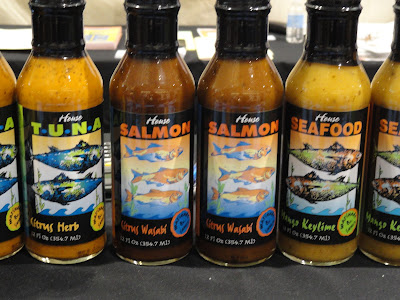 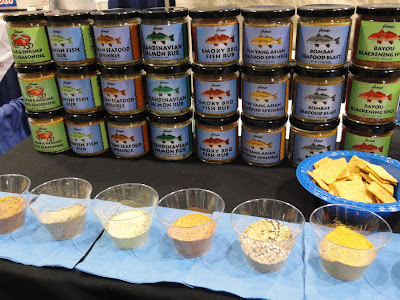 Ashman Manufacturing has a line of over thirteen seafood sauces and eight dry blends, and I tasted several of the sauces, including the Sweet & Spicy, House Salmon Citrus Wasabi, Jamaican Jerk, House Salmon Honey Ginger, and House Seafood Japanese Style. All of the sauces had a nice melange of flavors, rather than be one-dimensional.  The Citrus Wasabi was very good, though I would have liked a bit more spicy heat to it. The sweet sauces were good because the sweet flavors were not cloying, and there were some balancing tastes as well. The Jerk sauce was very appealing, and certainly brought to mind the Caribbean.  Their product line has plenty of diversity, offering a wide range of choices for the consumer. And the full flavors of the sauces will make them popular. 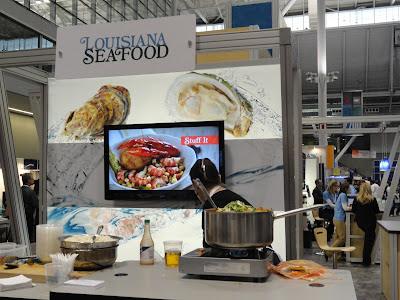 I was a bit disappointed that I never got to taste any alligator at the Seafood Show. The Louisiana Seafood were serving some gator, but only at certain times, and I seemed to miss those ones.  But, I did get to taste their Oyster Milk Soup (as well as get the recipe), and I enjoyed it. It was a lighter soup, with plenty of balanced flavor and spiced just right.

And on the lighter side.... 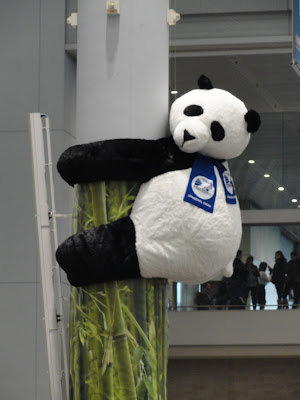 This poor Panda is clinging desperately to the bamboo column, fearful of two potentially lethal perils. First, he is worried that the attendees, crazed by all the free seafood samples, might think he is just another sample and try to grill him, coating him first with some panko. 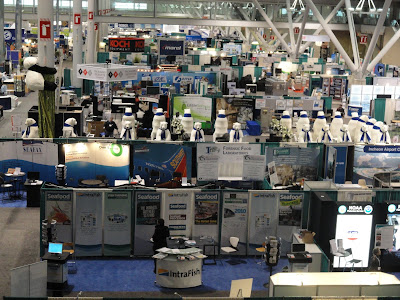 Second, the Panda is worried about the over twenty polar bears which are stalking him, waiting for him to slip off the column. You can see the poor Panda to the left of the photo, and a few polar bears are staying very close to him. 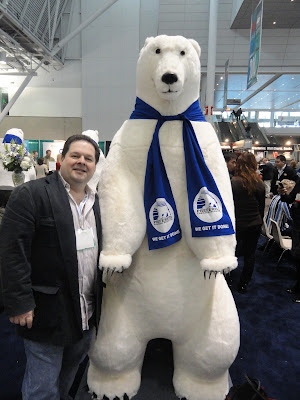 The Panda should be worried because those pole bears are huge, and have very long claws. I do hope that now that the Seafood Show is over, someone will rescue the Panda, as no one else but me seemed concerned about it during the show.
Posted by Richard Auffrey at 4:20 PM