The Sake vs Italian Food Challenge 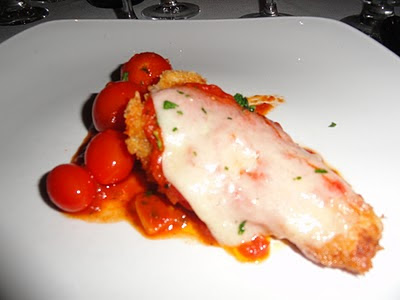 On Friday evening, a group of curious and adventurous diners chose to accept my challenge, to see whether sake and Italian cuisine would be a good pairing or not.  Most of the attendees had little, if any, prior experience with sake, and none had ever tried it with Italian food.  But they were all open to trying it, intrigued by the idea.

In collaboration with Gilt City, the dinner was held at Prezza, and Chef Anthony Caturano created a special four-course menu for the evening, and I paired a different sake with each of those courses.
First Course: Rabbit Parmigiano, Sauteed Cherry Tomatoes, Garlic, and Basil paired with Chikurin Fukamari Junmai

First, the food was excellent, and well received by the guests.  Some had been to Prezza before, and were already fans, while others had never been and were impressed. They were especially amazed at the large size of the pork chops we received. The chef did not skimp in the least on portions and each dish was plentiful in flavor too.

Second, the most popular sake of the evening was probably the Hou Houshu Sparkling Sake, which many said seemed the least sake-like to them.  It was sweet and bubbly, and a real crowd pleaser. It is the type of sake that almost anyone would enjoy, and it was simply a fun drink.

Third, the most popular pairing was probably the Kurosawa Kimoto Junmai with the Mushroom Risotto. the earthier and rich umami flavors of the Kurosawa complemented the savory mushrooms as well as the grated parmesan atop the risotto. I think the Kurosawa is a versatile sake, perfect for everything from BBQ to fried chicken. Plus, it is relatively inexpensive, often available for under $20.

The pairings led people to think in a different paradigm, to break out of the box of their preconceptions on food pairings. Plus, they learned about sake, as I spoke during the meal, providing them a crash course in Sake 101. I believe the dinner was a success, and I look forward to repeating this challenge in the future, as well as hosting other sake dinners with a variety of cuisines.  Sake and pizza?  Sake and BBQ? We shall see what the future holds.
Posted by Richard Auffrey at 4:00 AM

Awesome! I'm so intrigued by this whole sake can pair with anything thing. And did someone mention pizza and BBQ?

Sake is quite versatile, and I hope to show that fact to many people through a variety of dinners and tastings. I am currently working on Sake & Pizza for an upcoming Boston Wine School class. And I am open to any restaurant, of whatever cuisine, who wants to set up a sake-paired dinner.

aiya! posting at 4:00 AM
you are the man! whether you were just getting up or going to bed, I salute you!

the rissotto sounds like it was great, and I have an Italophile cooking genius who could use a sake intro...this could be a great entree.

Had the Hou Hou Shu sparkly and it's pink Hana sibling (with hibiscus) at a tasting last spring...wicked stuff, and I was a resistant purist at first, but was so very impressed. enough to do a little video tasting.
http://www.vtwinemedia.com/vt_wine_press/?p=565

Todd:
It is not an impressive as you think. I can schedule my posts for anytime I wish, so I was not awake at 4am when this one posted.

Definitely try some Italian with sake. It is a very good pairing and will really suprise people.

Sparkling sakes are a big hit, and will please even the non-sake drinkers.

I am so intrigued by this whole sake can pair with anything thing. And did someone mention pizza.....