Rant: Celebrating the Year of the Rabbit 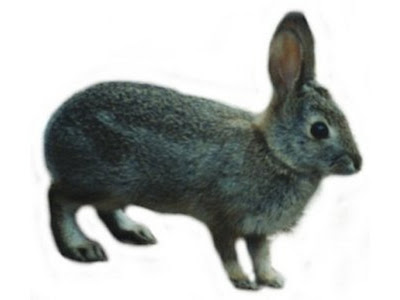 It is the Chinese Year of the Rabbit. So how should you celebrate?  Well, I think an excellent way to do so would be to eat some rabbit.

"Put the bunny back in the box."
--Cameron Poe, Con Air

Yes, there will be plenty of people who will recoil at the idea of dining on rabbit.  How can anyone eat a cute, fuzzy bunny? Some people may have had a rabbit as a pet, keeping it in a small hutch, and thus feel squeamish about eating something they once had as a dear pet. But people should be eating rabbit as it is one of the most nutritious and sustainable meats that exists.

Around 1100 B.C., when the Phoenicians first came to Spain, they found rabbits there and it is probable that they then spread rabbits throughout the Mediterranean region. The ancient Romans enjoyed rabbit meat, and they even created leporaria, walled areas where they raised rabbits for later slaughter. There once was even a Roman law that all young women had to eat rabbit because it was thought it would make them more beautiful.

Rabbits have continued to be eaten as food throughout history, though consumption in the U.S. has apparently declined greatly at least over the last hundred years. Have you ever noticed that it seems almost every movie about the Middle Ages shows rabbit being eaten? Nowdays, Europeans are far more amenable to dining on rabbit and France is the largest producer and consumer of rabbit.  My first time eating rabbit was when I was in Spain over 15 years ago.

Why should we eat more rabbit?

First, it is an excellent sustainable choice, far more sustainable than beef, pork, lamb or poultry.  Rabbits eat grass and marginal forage, thus they do not compete for resources with people and are more easily fed than many other animals.  They will even eat food scraps, which would be a great use for all of our vast food waste. We all know how rapidly rabbits can reproduce and they are available year round.  Rabbits require little space, certainly much less than other food animals.  You could even raise rabbits at home, which is relatively easy to do. It is said that a rabbit can produce six pounds of meat for the same amount of resources which a cow needs to produce a single pound.

The carbon footprint of raising rabbits is far lower than other common food animals, and thus much better for the environment.  As the demand for meat continues to increase, it may be impossible to meet that demand without causing significant environmental problems due to increased resource intensity. Beef may be the largest offender, requiring significant resources which could be instead used for other purposes which might better feed more people.  The increased consumption of rabbit could alleviate these issues, as rabbits require far lesser resources.  It is something that needs to be seriously considered.

Second, rabbit meat is very healthy and nutritious. The U.S. Department of Agriculture has even stated that rabbit is the most nutritious meat. Rabbit has only 795 calories per pound, compared to chicken at 810, turkey at 1190, beef at 1440 and pork at 2050. Rabbit also has the highest percentage of protein of any meat. In addition, rabbit has a lower percentage of fat and less cholesterol than chicken, turkey, beef, or pork.  Rabbit is easily digested, and has very high levels of Omega-3's and other good fats. Those are all good reasons to opt for rabbit.

Third, and a very important reason, rabbit tastes good. It has a mild and slightly sweet flavor, in some respects like chicken, though it can also remind you of veal or even pork. You won't find it to have a gamey flavor, which can be offputting to some. Plus, nearly all of the rabbit is white meat, which appeals to many people.  It is generally lean meat, so be careful about overcooking it. In addition, different parts of the rabbit have different characteristics so you can get a variety of flavors within the rabbit.  If you tasted rabbit blind, you would very likely enjoy the meat though you probably would not realize it was rabbit.

Rabbit can sometimes be found in local restaurants and some of my favorite rabbit dishes have been at Prezza in the North End.  In fact, at my upcoming Sake dinner at Prezza, there will be a Rabbit Parmigiano on the menu. You can also find it at some grocery stores, including the major chains, though it often is a whole rabbit.

The main resistance to eating rabbit appears to be primarily psychological. It is seen more as too cute to eat, too much like a pet. Yet those who actually eat rabbit find out how delicious it can be. Plus, as it is so sustainable and nutritious, more people should be eating rabbit. Break through that psychological wall and try some tasty rabbit. It is good for you, good for society, and good for the environment.

Celebrate the Year of the Rabbit with a fine dish of rabbit.

For more information, and some cool butchery shots and a rabbit recipe, check out The Leather District Gourmet's rabbit post, Of Rabbits and Roller Coasters - Dread, Thrills, and Calm for a new Butcher.
Posted by Richard Auffrey at 4:00 AM

Among other meats considered 'game', I do find rabbit likely the one that the uninitiated would enjoy upon first taste. Delicious.

I do admit that the sight of an unbutchered rabbit can be offputting as it does evoke thoughts of the animal as a housepet. I think that is what unfortunately hasn't gotten me quite to the point of preparing one myself. However, I have no qualms against eating it when prepared by someone else.

Here are some great videos taken, profiling a rabbit farm and a cooking tutorial - http://bit.ly/f57u5Q

Nicely done. (Now I have to watch ConAir) I think rabbit is delicious and SO sustainable. It gives some of us pause in the US but really, why should it? The hitch is we should think of all animals more carefully when deciding whether to eat them, IMHO. I'm on the omnivore side of the fence these days but certainly if one is at all concerned about sustainability issues rabbit is a great choice. It's also a really delicious protein. Tender and mild. Go bunnies!

Hi Mark:
Thanks for your comments and the link. The videos are very cool and people seeking more info on rabbit should check them out.

Thanks Jackie, both for your comments here and the cool rabbit butchery photos. "Usagi" is delicious!