WBW #71: Rhones Not From The Rhône--Carignan 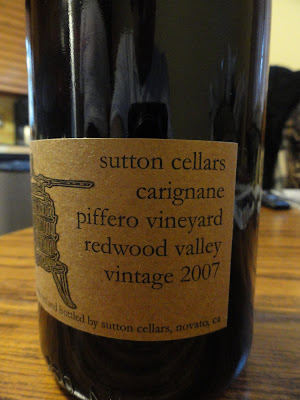 Wine Blog Wednesday continues its return and this time I want to support an underdog grape. (Which is nothing unusual for me.)

Tim of Winecast is the host for WBW #71, and the theme is Rhones Not From The Rhône. He asked the participants to "Pick any wine made from a variety best known in The Rhône but not made in that famous French region. It doesn’t matter if the wine is white, pink or red; still, sparkling or fortified. Whatever you choose just needs to be made from primarily a Rhone grape and come from a region not in France."  That should have been a relatively easy theme as Rhone grapes are grown all over the world, and many regions are making quite excellent wines from them.

I selected a wine made from 100% Carignan, a grape that has been widely planted all over the world yet is mainly used as a blending grape.  Single varietal versions of Carignan are much rarer, but I believe more wineries should be exploring the possibility.  Carignan likely originated in Spain, where it is known as Cariñena, and spread from there.  In 1988, it became the most widely planted grape in France, though that would decline after cash subsidies were offered to pull up vines, and Carignan became a main target.  It is still used there though, used in some Rhone blends, primarily to add color to the wines.

Some professional critics have been disdainful of carignan.  Jancis Robinson once said that its "wine is high in everything - acidity, tannins, colour, bitterness - but finesse and charm." Though more recently she has been less critical, though still seeing fault in some carignan, mainly from a "combination of high acidity and green, unripe flavours."  Other critics, like Eric Asimov, have been more supportive of carignan.  There is even a group, the Carignan Renaissance, which is trying to raise public awareness of the potential of this grape.

I chose to drink a 2007 Sutton Cellars Carignane "Piferro Vineyard" ($17.99).  Located in San Francisco, Carl Sutton founded the winery in 1996 and I have been fortunate to meet Carl a couple times when he came to Boston.  Carl is down-to-earth, passionate and the type of person with which you would love to share a drink. You can read my previous article for more details on Carl and his winery.

In short, Sutton Cellars is a small artisan winery, producing only about 3000 cases per year, most of the wines produced in lots of about 100-300 cases. The wines are hand filled, hand corked, fermented with wild yeast, unfined and unfiltered. Most of the wines have less than 14% alcohol, high acidity and use less oak than many other California wines.

The 2007 Carignane "Piferro Vineyard" is the second vintage that has come from this vineyard, which is located in the Redwood Valley. The grapes are about 70 years old, grow on red, iron-rich soils loaded with rocks and only 268 cases were produced. I have previously tasted the 2005 Sutton Cellars Carignane, from the Trimble Vineyard in Mendocino County, and very much enjoyed it. This new vintage is equally as delicious, with plenty of lush blueberry flavor, blackberry and mild spice notes. It has have plenty of acidity, but I don't see that as a problem as the wine is very balanced.  I also did not detect any green, unripe flavors, which would have really turned me off.

It is an easy drinking wine, but with appealing character, and would be an perfect pairing with burgers, pizza, or even pasta. This is a wine that after I had a glass, I very much wanted a second, and even a third. I paired this with my dinner, egg noodles with ground pork and pork ravioli, all with a slightly spicy sauce. I think it actually worked well, as the pork and spice flavors complemented the lush fruit flavors of the wine.  The wine did not overwhelm the food, and we finished off the entire bottle that evening.

This is a wine I highly recommend, and which I will definitely be buying again.  I hope that others will try single varietal Carignan too, and if you have done so already, please share your experiences in the comments.

Thanks to Lenn for bringing back Wine Blog Wednesday, and thanks to Tim for this new theme.  I'll be looking forward to WBW#72 next month as well.
Posted by Richard Auffrey at 5:00 AM

There are a few 100% Mazuelo Riojas that are worth looking out for in this vein. Paul Mas makes a good Carignan at La Forge Estate too which obviously is French, but Languedoc rather than Rhone...

Thanks for your post. I have a bottle of the 2010 on hand from Mendocino county, it does not specify the vineyard. I hope this vintage of the carignane is as delicious as the 2007 you tasted. Have you ever tried Sutton's vermouth? Great stuff.

Yes, I have had his Vermouth, loved it as well as posted about it previously.