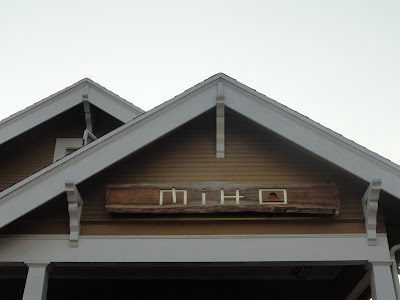 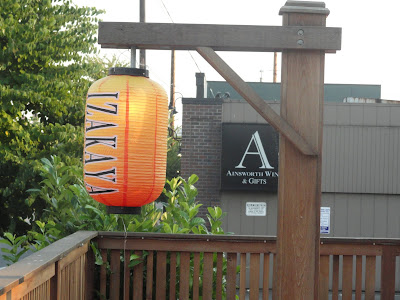 Portland, Oregon, is for Sake lovers.

Portland has a large number of izakayas and sake bars, so a sake lover can easily find a place to eat and sip some of his favorite sakes.  The literal meaning of "izakaya" is a “sit-down-sake-shop,” though it now often refers to a Japanese bar that also serves food to accompany alcohol, which includes more than just sake. Izakayas originated in the Edo period (1603-1867 AD) when sake vendors began to provide tables and seats for their patrons, and eventually started serving some food with the samples as well. Izakayas are also sometimes known as akachōchin, which means "red lantern," because it is traditional to hang a red, paper lantern outside of an izakaya.

From the second picture above, you can see the traditional red lantern hanging outside Miho Izakaya in Portland. On an early Sunday evening, two Portland sake lovers, Dewey, of SakeOne, andMarcus, the Oregon Sake Manager for Young's Columbia, took me out to dinner at Miho. The restaurant, which opened in 2009, is named after the chef and co-owner, Michael Miho, who comes from Hawaii. Though I did not meet the chef, I did get the chance to speak with Michael Carothers, co-owner and bar manager, who hails from Tennessee. Hawaii and Tennessee uniting for a Japanese izakaya? Don't worry, it really works.

The restaurant has a small interior dining area, and its porch has a number of picnic tables for exterior seating. It is a very casual place, a great place for a group of family or friends to go out to drink and eat. As it was a beautiful summer day, we ate outside, enjoying the weather and waiting for the dishes and sake to begin to flow.. 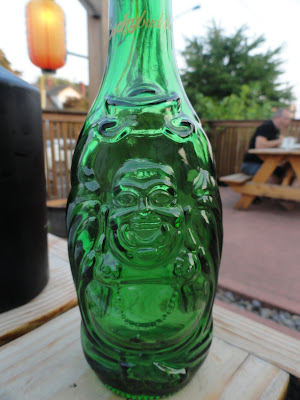 The drink menu has about 12 sakes, 5 shochu, 10 beers, assorted cocktails and several nonalcoholic beverages. The sake is generally available in 4 ounce ($4-$10) or 10 ounce ($8-$20) sizes, and includes imports as well as the local brand SakeOne. You'll find intriguing cocktails like "Little Debbie," a blend of shochu, grapefruit and ginger ale, and the "Lucky Rabbit," a blend of Silver tequila, Moonstone pear infused sake, triple and lime. Plenty of choices, no matter what your preferences.

I enjoyed a couple sakes, including the SakeOne G Joy, though was surprised that I actually liked a beer, the Lucky Buddha. It is a lager, brewed in China, from all natural ingredients including malt, rice, water and hops. It was crisp, refreshing and light, with a mild flavor. Plus it comes in a green bottle shaped like Buddha, which is very cool!

The food menu, which changes regularly, has over 30 items, generally small plates meant to be shared. The chalkboard will also have a number of daily specials, depending on what is fresh and seasonal. Prices vary from $2-$12, making this a very affordable place, especially considering the quantity of food on every dish. There is a nice variety of dishes, including vegetarian options, and most are Japanese inspired though a few have a Hawaiian flair. You probably will have difficulty narrowing down your choices as so much sounds delicious.

We selected a variety of dishes, and I was impressed by the freshness of many of the ingredients. Most of the dishes involved simple preparations, but they were expertly done, presenting clean, fresh and delicious flavors. The dishes tended to be light, and a nice accompaniment with chilled sake. After dinner, you will likely feel full, but not overly stuffed, so you will be able to continue drinking elsewhere if you desire. 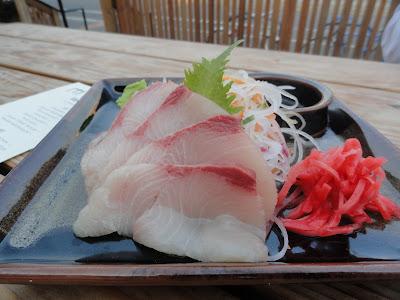 The Sashimi of the Day ($12) was hamachi, and it was absolutely stunning, fresh and silky smooth in my mouth. The large slices almost seemed to melt on my tongue. The Sashimi is the most expensive item on the menu, and everything else costs $10 or under. The quality and quantity of this sashimi though was well worth the price. 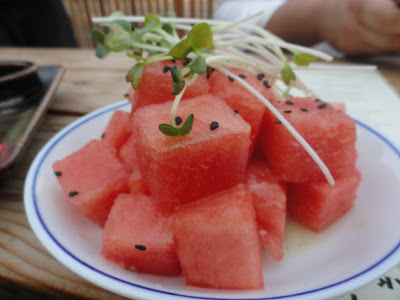 When I saw the Wasabi Watermelon ($2) on the menu, I knew I wanted to try it. The fresh watermelon cubes have been soaked in a wasabi sauce, and then sprinkled with black sesame seeds. The juicy watermelon had a slight spicy kick which I enjoyed, and which paired well to the sweetness of the fruit. I wouldn't have minded if it were spicier either. This is something I would like to prepare at home during the summer. 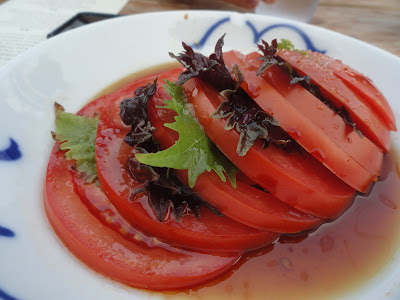 We also enjoyed a few vegetable dishes, including a plate of Fresh Tomatoes, Sweet Corn & Chili Butter, and Kabocha Squash. Each was quite tasty, with the Kabocha really shining, with its sweet flavor. So vegetarians would be quite happy dining here. In fact, about half the dishes listed on the menu are noted as being Vegan. 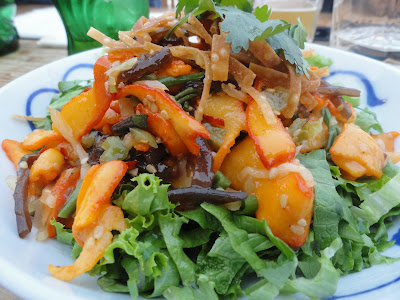 The Ika Calamari Salad ($4) is quite a large dish for the price, with a melange of fresh veggies and tender calamari. There was some crunch from the wonton strips and crispness from some of the raw veggies. A colorful presentation and a fine combo of flavors and textures make this a winner.

I would certainly return here, to try more of their dishes and drinks. Tasty food, fine drinks and a good value make this an excellent destination. Miho Izakaya is impressive and I strongly recommend it. 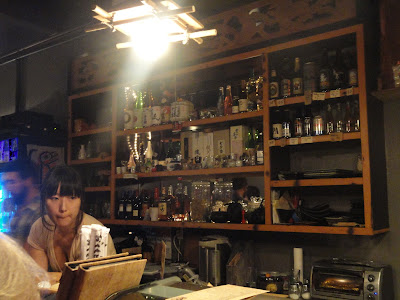 After Miho, we moved on to Zilla Sake House, a sake & sushi bar, for more drinking. It is a small place, a cozy bar which seems to acquire the loyalty of many regular customers, who store their own sake cups here. Many of their customers are young people, the "future sake generation," which bodes well for sake consumption in the years to come.

Zilla sells beer, wine and cocktails but the heart of the bar is their sake. They carry 60-80 different sakes, and their sake menu is a small book, which provides useful information about the sakes. For a sake lover, this is paradise, with so many diverse choices available. From namazake to daiginjo, sparkling sake to nigori, there is much to entice any sake lover. We drank several different sakes, and bonded well over these delicious drinks. We desperately need a place like this in Boston. 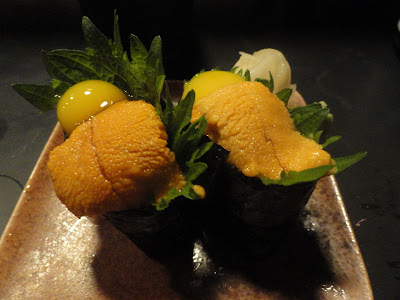 The sushi is reasonably priced, such as Maguro (2 pieces for $5) and Salmon (2 pieces for $4.75). Above is a picture of the Uni with Quail Egg which we eagerly devoured with our sake. I have to say that this was one of the tastiest Uni I have ever eaten, fresh, creamy and earthy. If the rest of their sushi is this fresh and delicious, then this is a superb sushi destination.

I later returned to Zilla on Monday evening with my friend Gordon, and we drank even more sake. Zilla Sake was another impressive Portland destination and I highly recommend it to all sake lovers. I will certainly be back, on my next journey to Portland.

Many thanks to Dewey, Marcus and Gordon for showing me a brief sample of Portland's sake scene.