I was extremely busy when I visited Portland, Oregon for the Travel Oregon press trip, and engaged in a wide range of food and beverage activities. I wanted to highlight a few of those activities here, as well as showcasing some of the artisan producers we met. It is these small, artisan producers who are helping to make Portland a fantastic food destination. My own participation, which I'll describe below, also gave me a glimpse into the difficult and skilled efforts these producers engage in on a daily basis. They deserve much respect for their passionate labors. 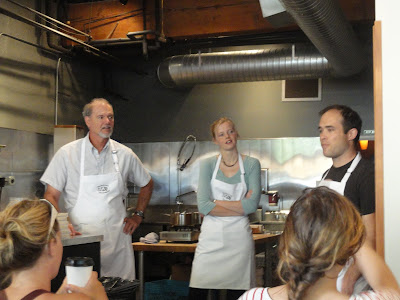 Chocolate! Who doesn't enjoy chocolate in all its forms? I attended a chocolate making class led by three chocolate makers, and got to with make some of my own candy. Starting from the left side, you can see Bruce and Ericka Reininger (father and daughter) of Arrowhead Chocolates. On the right side is David Briggs of Xocolatl de David. Interestingly, neither Bruce or David originally planned to enter the chocolate making business.

Bruce started out as a fish biologist and eventually changed careers, entering the field of web design. One of his web projects was for a chocolate maker and this intrigued Bruce, who then decided to make another career change into chocolate.  David initially acquired a physiology degree and became a personal trainer, though he always enjoyed cooking. He took a job as a line cook, making chocolate in his free time. His chocolates proved so popular that he started selling them and eventually purchased a shop, making this his full-time career. 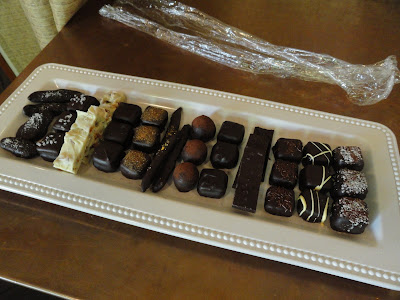 These chocolates are from Arrowhead Chocolates, representing a small sample of the different candies they produce. I tried several different ones and really enjoyed the varied tastes, especially the caramel covered candies. There are all handmade and that is not an easy task. I also tasted some of the chocolates from Xocolatl de David and they too were impressive, especially his Chocolate Bar with Parmigiano Reggiano. Both men are considered "melters" or "remelters" as they do not process their own cacao beans. Instead, they purchase large bars of chocolate which they then melt for their purposes. 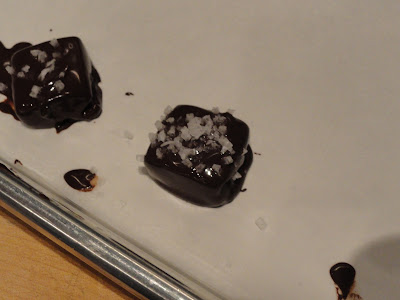 I made the candy in the center of this photo, a chocolate covered caramel with sea salt. The caramel squares were already cut, and I had to dip the caramel into melted chocolate and completely coat the caramel. I then had to move the candy to the tray, ensuring it was a clean square without chocolate dripping off the sides, and then sprinkle it with sea salt. It takes time and skill to make it clean, without dripping chocolate making it messy. I actually did a pretty good job, but I took my time and it was not easy. Professionals can do this far more quickly than I. 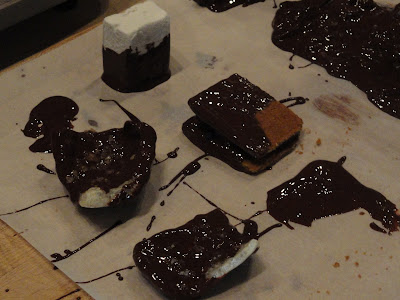 Here are some other chocolate covered concoctions I made, which I made by dipping various items into some melted chocolate. There is a marshmallow, some graham crackers and homemade chicharróns, basically fried pork rinds which were superb. These were different from the chocolate caramels I made, and did not need to look as good. More chocolate fun! 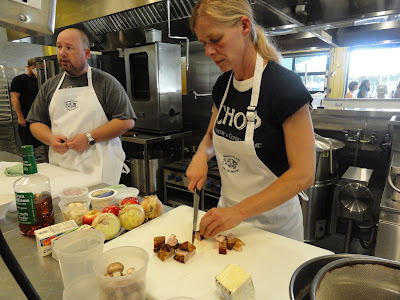 I later had some charcuterie lessons from Eric Finley and Paula Markus of Chop Butchery & Charcuterie.  Chop Butchery is a small business and they make all of their own charcuterie as well as butcher all of their own meats.  They have a curing room in their basement and try to source locally as much as possible. Their products are sold to restaurants, stores and consumers, including at local farmer's markets. Both Eric and Paula were very personable and down to earth, with a clear passion for their work. 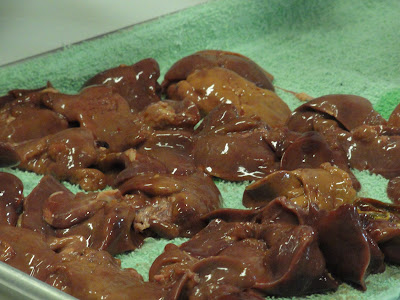 As most charcuterie is lengthy to prepare, Eric decided we could make a quick and simple chicken liver mousse. Above, you can see some of the chicken livers. They may not look appealing but they provided an intense and compelling flavor to the mousse. 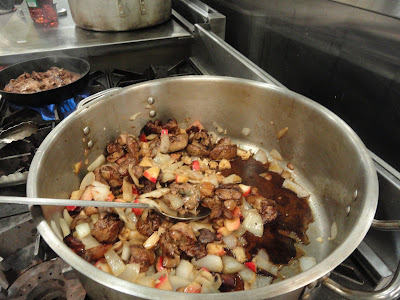 The onions, mushrooms, garlic, bacon, spices, and more being fried up for addition to the mousse. 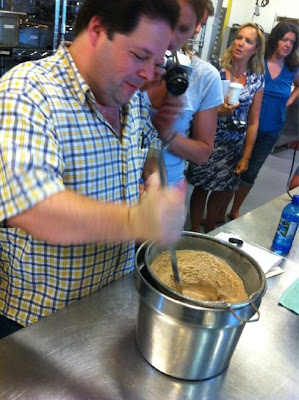 I volunteered to assit and was put to work separating the mousse from the rest of the solids, sifting it through a strainer. I did that about four times and it gave my hands and arms a good workout. 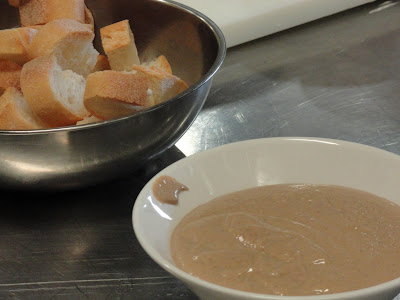 The finished product is above, and though it may not look especially appealing, it tasted great, especially considering I helped make it. Slather it on some fresh bread and it makes a delicious appetizer. I just needed a glass or two of wine. 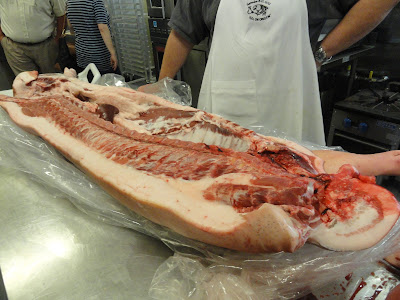 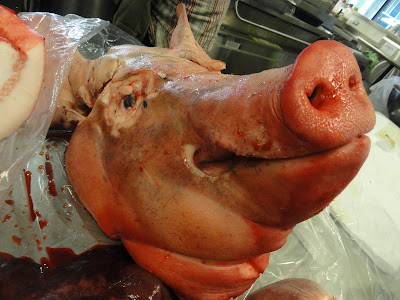 They also rolled out a partially butchered pig for us to see, which made me desirous of some pork. Isn't this pig cute? 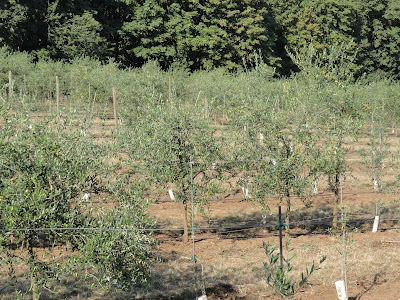 The olive oil industry in Oregon is relatively new and one of the pioneers is the Oregon Olive Mill at Red Ridge Farms. We met Paul Durant whose parents started the farm in 1973, planting Pinot Noir, Riesling as well as various fruits. The farm now has about 60 acres of grapes and they produce about 1000 cases per year under the Durant Vineyards label. Paul's mother specialized in agriculture, not viticulture, and sold olive trees.  About eight years ago, Paul's father planted about 2000 olive plants and their olive production facility was completed in 2008. Winters can be tough so they are researching olives which will do best in their climate. 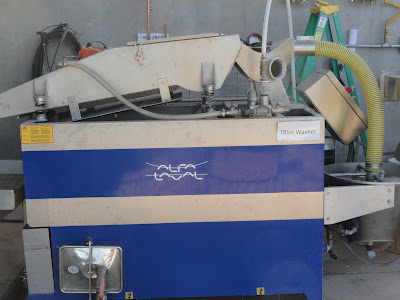 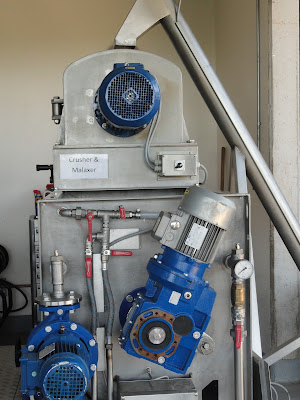 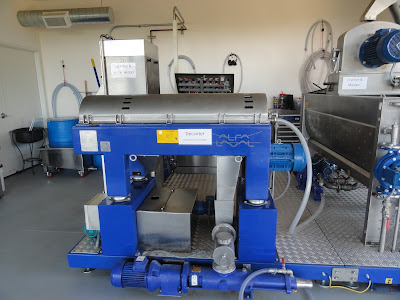 With the above machinery they can process about 500 kilograms of olives per hour, and noted that clean fruit is very important as well as that most of the flavor comes from the olive pit. They keep the olive oil in stainless steel tanks and bottle it about once a week. They make about 4000 liters each year. 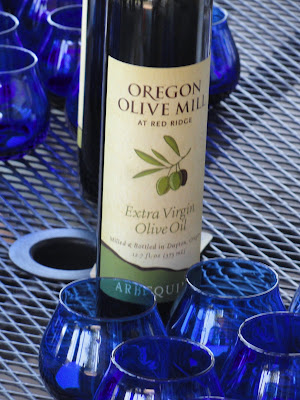 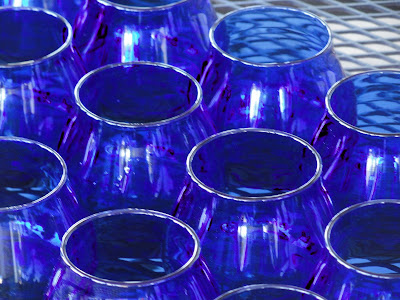 We tasted three of their current releases, including Arbequina, Koroneiki, and Tuscan Blend (a field blend of 3 olives: Leccino, Frantoio, Pendolino). The olive oils were generally fresh, clean and flavorful, and certainly would please most people. The Tuscan Blend was probably my favorite, as it had the smoothest taste. These examples seem to indicate that olive trees can succeed in Oregon.

It also shows how the passion of artisan producers can lead to excellence. And that is the lesson of this entire post.
Posted by Richard Auffrey at 4:00 AM

That is my dream trio, then drop in chocolate covered chicharrons. Something so wrong and right.