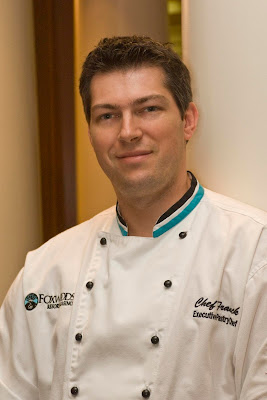 (Check out my Introduction to the Culinary Creativity series.)

Executive Pastry Chef Franck Iglesias was born in Argenteuil, France, just north of Paris, and while his mother prepared traditional French specialties at home, his father worked as a restaurant chef.  When he was 16 years old, he entered Andorra Culinary School and two years later moved on to Perpignan, where he learned the art of pastry making. After a number of years working in France and Spain, he moved to the U.S. in 2000, working in Connecticut and New York. In New York, he worked at the famed Upper East Side Payard Patisserie & Bistro.

In 2009, Chef Iglesias became the Executive Pastry Chef at Foxwoods Resort Casino and the MGM Grand at Foxwoods, and oversees a staff of 40 and services 34 food outlets. I most recently saw Chef Iglesias on television, as he competed against three other pastry chefs in the new culinary competition show “Sweet Genius.”  Chef Iglesias came in second place with his final dish of Dark Chocolate Huitlacoche Mousse with an Eggnog Crème Brûlée. He evidenced much creativity during the course of this show so he seemed a perfect person for my Culinary Creativity interview.

Now onto the interview--

How important is culinary creativity to you? Why is it important?
Very important! To me it is crucial, and it’s why I love my job! It allows me to be creative. Without creativity, it would be boring, that’s why it is so important. Creativity allows me to incorporate my love of art into my work.

What are your most significant inspirations for your culinary creativity? What makes those matters so inspiring?
Seasons are my true inspiration. Ingredients that are available for a few weeks or months, sometimes fruit or vegetables that you only find in farmer’s market, are what inspires me the most. From the flavors to colors, each season brings a different feeling, sensation and taste, that I use as inspirations for my creations.

Where do you get your ideas for new recipes/dishes?
I get ideas in so many different ways. It can come from a combination of flavors that I feel would work well or a theme or even some colors I want to work with.

What is your process of creating a new recipe or dish?
I first write down the seasonal ingredients available or the one I want to work with. Then I decide which one I want to pair (sometimes unusual combination that I believe would work together), after this process, I try to create a dessert that explores the different ways to add textures, contrast (hot-cold) or colors.

Do other members of your staff assist with creating ideas for new recipes/dishes?
Yes, I sometimes ask my team for ideas. As an example I recently asked one of my employees to think about a dessert idea for one of our restaurants. She said I love pumpkin latte; it would be great to do a dessert inspired by it. We turned that idea into a delicious pumpkin pain de gene with cappuccino cream, pumpkin seed brittle, milk foam and pumpkin seed oil powder.

How do you test new recipes/dishes?
We mostly try them until we like the way they taste and look. It can sometimes happen the first time but mostly we have to change things several times before we feel completely happy with the result.

What is the most difficult part of culinary creativity?
It is difficult to put flavors together without having some overpower other ones. You have to be careful when you mention ingredients on your dessert description. If you mention ginger or lemon thyme you want the customer to taste it along with all the components of the dessert. It is all about balance!

Do you ever experience “writer’s block,” an inability to be creative, and if so, how do you deal with it?
Yes, sometimes that happens. Usually it is because I have too many ingredients or too many ideas and I need to walk away from them for a couple of days. It helps to come back with a “fresh mind” There is definitely some moments where inspiration flow like a melting snow river, and then moments or pure dryness!

Relate an unusual or interesting anecdote about the creation of one of your dishes.
One day I wanted to infuse pears with Tobacco, I wanted to give a light smoky flavor. The result was awful; it was leaving a nasty nicotine taste in your mouth. One of my sous-chef got mad at me as he was trying to stop to smoke and had this “cigarette” taste for a little while after tasting the pear. I tried again with cigar tobacco! That was much better! We are still talking with my team about this “creation” as one of the worst I ever did!
Posted by Richard Auffrey at 9:51 AM