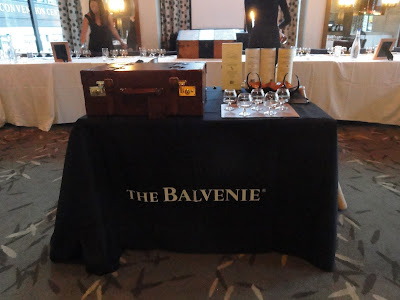 What happens to old, oak barrels? When a barrel is no longer needed to age wine, bourbon or rum, where does it go? Should it just be discarded or is there some use that can be made of it? In fact, the Scotch industry is the recipient of a number of these used barrels, especially the bourbon ones, though some distilleries find use for other barrels as well.

Whisky, or whiskey (dependent on your country of origin), is a distilled alcohol made from a fermented grain mash, and that grain could be barley, wheat, corn or more. The term "whisky" originated from an ancient Gaelic term, "uisge beatha," which means "water of life."  In some respects, you could also almost consider whisky to be akin to "boiled or distilled beer," though I am sure whisky lovers might not like that characterization.

Whiskies are made all over the world but I am going to concentrate on Scotch whisky today. Obviously, Scotch whisky must be produced at a distillery in Scotland but there are other regulations, now described in the 2009 Scotch Whisky Regulations. For example, the whisky must be aged for at least three years in oak barrels and have no added substances, other than water and plain caramel coloring. 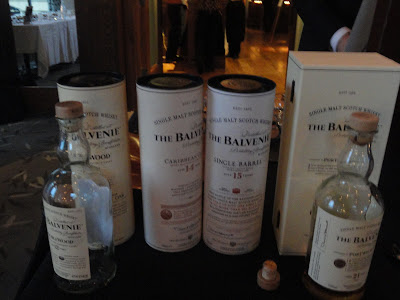 I recently attended a press event, a Balvenie Scotch Whisky tasting, led by Andrew Weir, the Balvenie ambassador to the U.S. Andrew is one of two ambassadors traveling the U.S. and showcasing some of the Balvenie products, including one which has not yet entered the market. It was a fascinating and educational event with several compelling Scotches.

Located in the region of Speyside, Balvenie Castle was constructed in the 12th century and its remains still stand, next to the Balvenie Distillery. Next to the castle was Balvenie Mains, a large farm, and eventually the Balvenie New House, an 18th century mansion, was added to the neighboring area. Around 1892, construction began to transform the mansion into the Balvenie distillery. The first distillation there was conducted on May 1, 1893. Currently, the distillery employs about 150 people and produces annually approximately 63 million liters of whisky. The 1000 acre farm next to distillery grows some of the barley used in the distillery.

Balvenie is very different from many other Scotch distilleries. There are approximately 100 whisky distilleries in Scotland but only 5 are owned by independent families, and Balvenie is one of those five. It is also the only distillery that grows its own barley. In addition, Balvenie is one of only six distilleries that conducts floor maltings. A floor malting is where barley is soaked in water and then laid out atop a concrete floor and constantly turned, later to be dried in a kiln. Most other distilleries purchase their malted barley. Balvenie Scotch, despite the distillery's great size, is a hand crafted product, which is time intensive and even inefficient. But to change any of that could diminish its quality.

One element that helps Balvenie create a superior product is the length of experience of some of their key personnel. Dennis McBain, their resident Coppersmith, started at Balvenie in 1958, when he was only 15 years old, lying about his age. He is the only resident coppersmith in Scotland, and has over 50 years of experience. David Stewart, their resident Malt Master, started at Balvenie in 1962, and he is currently the longest serving Malt Master in the business, and will celebrate his fifty year anniversary next year. With their vast experience and knowledge, they assist in the creation of a superior whisky. 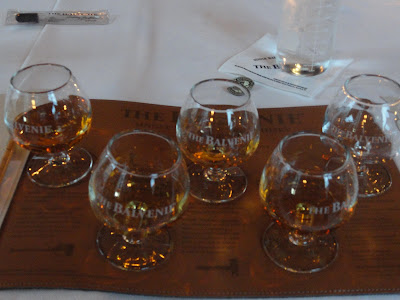 In producing whisky, the oak barrel is one of the most important aspects, providing 60%-70% of the flavor and all of the color. They never use new barrels, only ones that were once used for something else, as they desire slow maturation. Most of the time, they use old bourbon barrels and in Scotland, there are about 20 million bourbon barrels, compared to their population of about 5 million people. Before bourbon barrels had been available, they used whatever was around. A barrel usually yields about 350 bottles of whisky. Balvenie employs eight coopers to maintain their barrels, and use not only bourbon barrels, but others as well, including rum, sherry and port barrels.

Andrew mentioned the "magic in the wood," which would seem to apply to not only Scotch but wine as well. No one knows completely for sure what will happen when scotch or wine is placed into an oak barrel. Barrels may seem similar but the scotch or wine inside will develop differently, barrel to barrel, over time. That was made clear to me when I toured the sherry bodegas of Spain. And for scotch, the type of barrel used will definitely affect its aroma and taste.

Andrew also stated that there are more flavors components in a glass of scotch than wine. In drinking whisky, he told us to ignore any so-called rules and drink it anyway we chose. He suggested that a wine glass may be better than a rocks glass for appreciating the aroma of the whisky. In addition, he suggested that we sip whiskey like hot tea, to best appreciate the complexity and taste of a single malt. As alcohol is a barrier to flavor, it can be beneficial to add a little water to reduce the alcohol and thus increase the flavor.

One of his final bits of advice concerned visiting a whisky warehouse. If you do visit one, you might be offered the opportunity to taste whisky from any barrel you choose. Though many people might seek out the oldest whisky or their birth year, there is a way to potentially discern the best whisky in the warehouse. Tap the casks and seek the emptiest one, as that is where the workers have been sipping, and it is they who know where the best whisky is located. 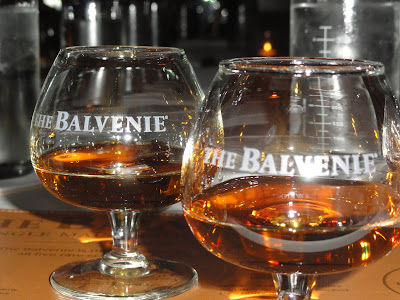 We tasted five Balvenie scotches, each with significant differences, yet all were pleasing and delicious, albeit in different ways. Prices generally range from about $40-$250, typical for high-end, single malt Scotches.

We began with the 12 Year Old Doublewood, which spent 12 years in a bourbon barrel and then an additional 9 months in a sherry cask, a barrel that once held a dry Oloroso. In 1982, they first started using sherry barrels as a finisher, wanting the additional spice and richness they would provide. The Doublewood was smooth and rich, with delicious flavors of vanilla, honey, caramel and spice. There is something about this Scotch which did remind me of a fine, aged sherry so it was especially appealing to me. This is the least expensive of their Scotches, and one I believe offers a good value.

Their 14 Year Old Caribbean Cask was created because the public demanded it. Previously, Balvenie produced a limited edition Scotch that was finished in a rum cask and consumers loved it, but when it was no longer available, there was a great clamor for its return. So, Balvenie chose to make it a regular product. This Scotch is finished for about four months in old rum barrels and the resulting Scotch tends to be a bit sweeter, with tropical fruit flavors, and even a little banana. It certainly brings to mind the Caribbean, and not what I would normally think of for Scotch.  It was very different from the Doublewood but each is appealing in their own unique way. I prefer the Doublewood but that it merely a matter of personal taste.

The 15 Year Old Single Barrel is aged only in a bourbon barrel and presented a very compelling aroma and taste. It was silky smooth, with a complex melange of vanilla, butterscotch, caramel, honey, and even some appealing earthiness. It possessed a lengthy and very satisfying finish, a mellowness that would warm you on a chilly winter evening. This is a Scotch to slowly sip and savor with friends, to enjoy each amazing taste. Highly recommended.

Back to the varied finish barrels, the 21 Year Old Portwood is finished for four months in a Tawny Port cask. This is a much rarer Scotch, as only about 1% of their production survives for 21 years. This Scotch is rich and complex, with an intriguing fruitiness combined with notes of chocolate and a very lengthy finish. Though I enjoyed this Scotch, my personal preference would be for the Single Barrel. 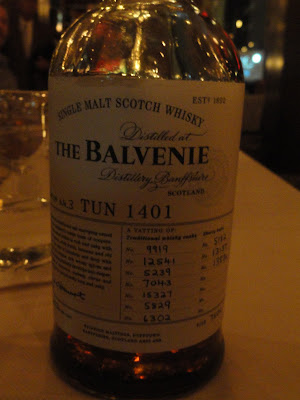 The final Scotch we tasted has not yet been released, though will be available very soon. It is the Tun 1401, Batch 3, a blend of 10 excellent vintages from 1967-1989. Only 1800 bottles have been produced and it will sell for $250 per bottle. This Scotch has a darker color than the others and was a potent and complex whisky. It was rich, full bodied and powerful, with an intriguing and complex blend of flavors, including vanilla, honey, citrus, spice, and more. A superb Scotch, albeit pricey, but something for a true connoisseur.
Posted by Richard Auffrey at 4:00 AM

The Caribbean Cask is actually the US-exclusive release. UK buyers instead have the 14 year old Cuban Selection which is (obviously) aged in Cuban rum casks. Since Glenfiddich got into some hot water with US authorities over their 21 year Havana Reserva, I'll take a guess and say the Caribbean Cask (for the US) was aged in other rum casks with the Cuban rum casks reserved for non-US markets.

I love this whisky! It's surprising though that an independently owned craft distillery, that grows their own malt, would add artificial coloring to the final product!

Interesting, ... of all the Balvenie releases my favorite is also the 15-year single barrel, however the OLD one - not the new one aged in sherry casks.