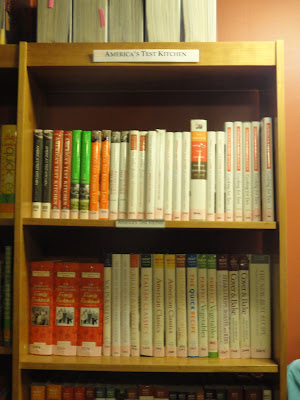 With the many thousands of food blogs in existence, the most common type are the recipe blogs, where writers post the results of their home cooking. I recently had cause to ponder some questions concerning these recipe blogs. How often do they practice a recipe before posting it? Have they considered other factors that might influence their recipe? Can you successfully replicate their recipes if you try them at your own home?

What brought these questions to mind was a short tour of the headquarters of America's Test Kitchen. America's Test Kitchen is a cooking show, hosted by Christopher Kimball, on public television stations. Kimball is also the editor-in-chief of Cook's Illustrated and Cook's County magazines, which are published in alternate months. In addition, the company publishes various cookbooks, with "Slow Cooker Revolution" being their best seller last year. Their headquarters, for all of their endeavors, is located in Brookline, Massachusetts.

Kimball founded Cook's Illustrated in 1980, eventually selling it to Condé Nast Publications, which chose to discontinue it in 1989. Kimball reacquired the rights to the magazine and relaunched it in 1993. Cook's Country, which emphasizes home-style cooking, was launched in 2004. The magazines accept no advertising and primarily present detailed recipes which commonly use ordinary and easily available ingredients. The goal of the magazines is to provide recipes that can be replicated by home cooks with the near exact result every time. In addition, the magazines also present evaluations and comparison tests of kitchen equipment and branded foods and ingredients.

Renee of the Boston Brunchers arranged a tour of America's Test Kitchen for a small group of bloggers and I was interested in viewing the facilities. It is located at a nondescript location and you enter their offices on the second floor, though their offices extend from the basement to the fourth floor. The tour lasted about an hour, providing us a brief glimpse behind the scenes, and I could have easily spent much longer asking questions and delving deeper into their endeavors. 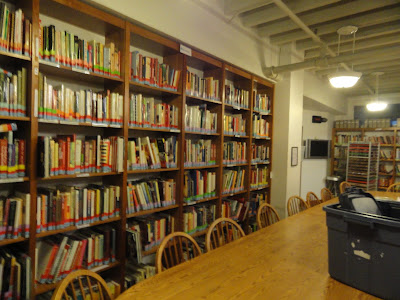 We began the tour at their food and cookbook library, which contains approximately 4,000 volumes and is considered one of the largest private cookbook libraries in the U.S. This is where their test cooks do much of their recipe research, commonly evaluating 5 recipe variations at the same time.  The test cooks will later prepare all five recipes at the same time, and continue repeating a recipe until satisfied, often about 20 times, though it might be even as much as 100 times.

When the test cooks are satisfied with their results, they will send out the recipe to numerous consumers, from a pool of about 10,000, who will test the recipes and then provide feedback. Despite all the time, effort and resources invested in a recipe, it might be canceled if it cannot garner sufficient positive results from the consumer feedback. About ten recipes are included in each issue of Cook's Illustrated, so about sixty in the course of a year.

In a very small and informal survey on Twitter, I asked some food bloggers about how often they repeat a recipe before posting it. Sometimes, they post about their first attempt at a recipe, and such are not always successful. Other times, they might repeat it a few times, with a high limit of roughly 5 or 6 times. On occasion, they post some recipes which they make on a regular basis so those recipes are the most well practiced of all they do. Thus, most recipe blogs seem to often test their recipes only a fraction of the time of  that of a professional magazine like Cook's Illustrated.

Obviously a blogger, who is doing this as a hobby, does not have the time or resources to replicate a recipe as often as would Cook's Illustrated. So we cannot expect them to test a recipe twenty times or so. The primary ramification is that if you prepare a recipe from a food blog, it might not come out as it did in the blog. Certain factors might not have been considered in the food blog that could affect other home cooks. As long as you understand that point, then you will be prepared. 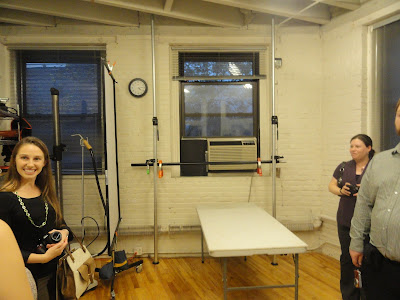 This is their photo studio where they take pictures for the magazines and cookbooks.  They use all natural light, without any flash, and all of the food is real and not some plastic model. 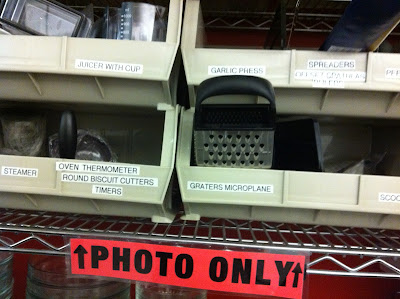 They have various prop rooms, storing items which will be used only in their photos. There are racks of pots, pans, utensils and more which are never used for cooking but are merely props for pictures. They obviously want the equipment to look pristine so it cannot be used. There is a room containing many plates, dishes, cups and such, all divided by color and wrapped in plastic to keep them safe and clean. 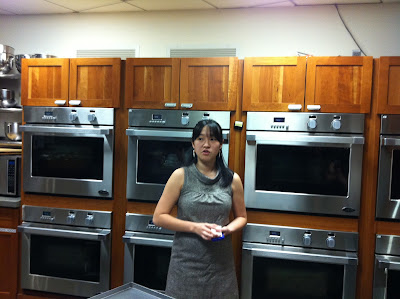 The kitchen, which was renovated in 2005, contains mostly ordinary equipment which you would find at any home. There are only three items of industrial kitchen equipment: a refrigerator, dishwasher, and kitchen hoods. The idea is for their test cooks to replicate the same conditions as any home cook. When the magazine tests kitchen equipment, they will start using the winning equipment in their kitchen. Their ovens commonly run for up to 8 hours a day, and much of the rest of their kitchen equipment gets frequent use too, which means the kitchen must purchase frequent replacements.

There are about 35 professional cooks in their kitchen, and they are all credentialed chefs. It is not easy to get a job at America's Test Kitchen (ATK), and the competition for a spot can be quite fierce. A test cook will usually work on 1-2 recipes per month, alternating writing. researching, and cooking. I wonder whether boredom is an issue for these chefs, as they will be working on only one or two recipes each month. How many times can you make the same dish, before getting bored with the repetition? At least at a restaurant, a chef may be making some of the same dishes all the time, but they have far more variety available to them. It is not like they are restricted to making only a single dish.

Logistically, the kitchen provides some unique challenges. As their need for ingredients changes often, the logistics of obtaining their supplies gets complicated. Much of their work is conducted about six months ahead of the publication date so obtaining seasonal ingredients can be very challenging, especially certain produce. They cannot buy in bulk as they generally must use the same sizes that an average consumer would purchase. So that increase their overall expenses. Each day, the test cooks must submit a list of their needed ingredients by around 2pm and then logistics will compile a master list by 3pm. The list might specify certain brands or sizes. Then, their suppliers will send over those ingredients the next day by 10am. Last year, ATK spent about $525,000 on ingredients alone.

Interestingly, they will sometimes purchase unusual or rare ingredients merely for experimentation, even if the recipes won't end up in the magazine or books. The kitchens shut down every May for about three weeks while they film the 26 episodes of their television show. That must certainly be a very hectic time, trying to produce 13 hours of television in such a short time period. Besides filming in the kitchen, they also sometimes use the small alley and parking lot outside their building for any grilling episodes. That area is also used for test grilling year round, even in the winter.

When ATK conducts blind tests of various food products, everyone in the office gets to taste the products. Certain products, like macaroni & cheese, garner for more employee interest than do items like mayonnaise. Sounds like a nice perk for working at their offices.

While passing by their pantry, I noticed they have some wines and beers in stock. They have not done any taste tests of specific wine or beer brands, and will only list a basic type in recipes, such as Chardonnay. I think that is an area which they might want to address in the future as I think the type of wine or beer used in a recipe is a potentially significant factor. For example, would a recipe differ if you used a lean, fruity and unoaked Chardonnay as opposed to an overly oaked, buttery Chardonnay? If they stated to add a Sherry, would it make a difference whether it was a Fino or Amontillado? With their great concern for ingredients, I would think this is an area which they should care about too. 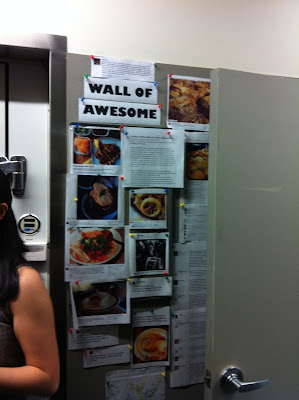 A new addition to ATK, instituted just a few weeks ago, is their "Wall of Awesome," a compilation of consumer feedback, including tweets, recipe photos, letters and more. Each week, the Wall is replaced with a new collection of items.

One of their latest endeavors is the start of an online cooking school through their website. You will prepare the recipes at your own home, and then submit a photo of your finished dish along with your own assessment of the results.  The instructor will then provide you feedback, helping to point out any areas which require correction. It will be interesting to see how that program works out.

It was intriguing to look behind the curtains of America's Test Kitchen, and it certainly made me think about several different issues. Maybe I will follow up on these questions in the near future.  Meantime, if you have any thoughts on these issues, please add them to the comments.
Posted by Richard Auffrey at 4:00 AM

We don't have public libraries here in Rome, they are very difficult to access and are not well furnished. I miss the New York Public Library, I used to do lots of research there during my high school days.

I have several Cooks Illustrated books including How to Make a Pie which I found invaluable during a piemaking class about 10 years ago. That is one serious kitchen? I'd get bored making the same recipe that many times. Good thing I'm not trying to go in that direction!

Great work and great ideas to learn about some delicious recipes

That is one awesome kitchen. I have several Cook's Illustrated cookbooks and have tested several of their test recipes. I wouldn't be without my online subscription to their site either. thanks for sharing.
Vicky

totally great and thorough mini virtual tour of the test kitchen! so glad you were able to visit, and it IS impressive (even for us who work here) how many tests a recipe truly necessitates to be perfect for publication. great seeing you last night at tavolo (still hankering for those sausages).

Omg!!!
Yvonne Ruperti!
What a gorgeous gal.
Chris Kimball you are the man!
The cooks you hire are babes.
Love that Becky!

Thanks for the informative update about America's test kitchen. The cooking show is very excellent!

This is my first time visit here. From the tons of comments on your articles,I guess I am not only one having all the enjoyment right here! Thai Food Recipes