Rant: Where Is The Roast Chicken Love? 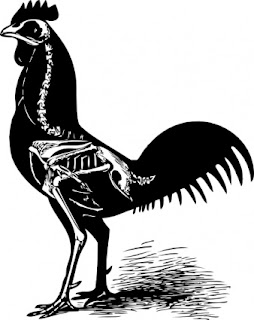 1990 was a pivotal year in the battle of beef versus chicken. It was the first year that Americans ate more chicken than beef, and that has continued to be the case to the present. From 1975-2009, the number of cattle slaughtered in the U.S. dropped by about 20% while the number of chickens killed increased by about 200%. Approximately ten billion animals are killed each year in the U.S., and almost nine billion of those are chickens.

So though it is clear that we are eating plenty of chicken, would you order Roast Chicken at a restaurant?

I have heard many people state they would not, and the primary reason seems to be because they can and do make roast chicken at home. Yet that seems a strange reason because those same people order plenty of other dishes which they make at home, from burgers to steaks, from chicken parmigiana to baked cod. So why should roast chicken be any different? Or is the true reason is because people assume roast chicken at restaurants is not an exciting or tasty dish?

It is rare for me to order roast chicken at a restaurant, and my reason is that there are often other choices on the menu which seem more exciting and/or exotic. But, I also have enjoyed some superb roast chicken dishes at local restaurants, which sometimes makes me rethink my choices. Roast chicken deserves more love and respect, and I encourage my readers to consider it the next time they dine out. I think you might be very pleasantly surprised and satisfied.

Most recently, I dined at Bergamot, one of my favorite restaurants, and as I perused the entrees, I finally settled on the Roasted Chicken with Potato Dauphinoise, Swiss Chard, Leeks, Truffles, and Chicken Jus. I have much faith in their kitchen, so I suspected they would deliver a top notch dish, even if it were only roast chicken, and I was not disappointed in the least. It was simply a perfect piece of chicken, moist, tender and flavorful with crispy skin. I have had roast chicken cooked by many people at their homes, and it rarely is ever as moist and tender as what Bergamot prepared. All of my dining companions were equally impressed with the chicken and I would order this dish again. Plus, the Potato Dauphinoise made a delectable side.

I also previously enjoyed a superb roast chicken dish at L'Espalier. Their Roasted Apple Street Farm Chicken, with hedgehog mushrooms, pommes puree and green peppercorn jus, was perfectly cooked, with an addictive crispy skin. The Apple Street Farm, located in Essex, is owned by Chef Frank McClelland, and the farm aims for sustainability. These are not the typical factory farm chickens.

That raises the point that maybe what differentiates some restaurant Roasted Chicken dishes may be the sourcing of their poultry. Rather than obtain their chickens from the dreaded huge, factory farms, certain restaurants seek more local poultry, from small family farms, and maybe even heirloom breeds. These chickens usually are far more flavorful, as well as probably healthier for you. They also may not be the type of chickens many people buy when they go shopping for their homes. So, if you order roast chicken at certain restaurants, then you may not actually be ordering something you may prepare at home. So the next time you dine out at a fine restaurant, consider ordering their roast chicken.

Have you had a delicious roast chicken dinner at some other restaurant?
Posted by Richard Auffrey at 4:00 AM

I don't have an absolute rule about not ordering chicken in a restaurant, but it is something that I rarely do, unless the restaurant is known for exceptional roast chicken preparation. One example would be The Gallows in the South End. All too often, a restaurant treats their chicken dish as the 'safe' dish that is on the menu to satisfy the unadventurous, timid, suburban tastes. There will be plenty of time for that kind of eating when I'm hooked into a feeding tube at the nursing home.

I actually order roast chicken more often than not at a restaurant I haven't been before because it is a simple dish, and therefore one I can base a true opinion on. It's classic- we all know how it's supposed to be so if it fails-it sets off alarm bells...