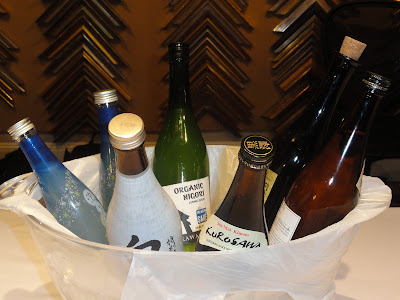 We often hear complaints about the outrageous prices of wine sold at many restaurants. Some places charge three, four or even fives times the usual retail price of a wine. Who wants to pay $30-$50 for a wine at a restaurant that they can buy at a local store for $10? I have heard all of the arguments put forth by these restaurants, and though I would agree to the validity of a certain markup, some markups are absolutely unnecessary, bordering on larceny.

Sake prices at restaurants can be equally as appalling. I have seen a 300ml bottle, which retails for $8, sold for $32 at a local Japanese restaurant. That is a four times markup from retail, and we all know that the restaurant is paying wholesale for it, so the true markup is even higher. What possible justification exists for such a drastic markup? I have seen plenty of restaurants where the sake markup is three times the retail. And it is often the least expensive sakes that have the greatest markup. That seems to make such little sense.

Interestingly, you will often see wine writers advise you to choose the less common wines on a restaurant wine list, as they can often be good deals. As such wines are not popular, or as well known, the restaurant may not mark them up as high, in order to get more people to take a chance on them. That makes logical sense, and can help people broaden their wine horizons. So why don't these restaurants apply the same logic to sake?

Sake is still a very niche beverage, unfamiliar to many, and needs much more promotion. The average consumer knows very little about sake, and what they do know may even be incorrect. So, they are much less likely to order it at a restaurant, especially if it is expensive. If they are going to try something new, they are far more likely to do so if they are offered an apparent bargain. So, restaurants should have a much lower markup on their less expensive sakes, in order to entice people to take a chance, to try to garner new sake drinkers. And despite the lower price, the increased amount of sales should provide even more profit than far fewer sales at a higher price.

Existing sake lovers will often know the retail prices of the sakes on a restaurant list. They are very unlikely to order a sake where the price is outrageously overpriced, and such prices will give those sake lovers a more negative view of the restaurant. If the sakes were more reasonably priced, then sake lovers would be more conducive to ordering a bottle or two. They would also be more likely to refer their friends and others to a restaurant with a more reasonably priced sake list.

So there are multiple reasons why restaurants should have a more reasonable markup for sake, to encourage new sake drinkers as well as to please existing sake lovers. So will any restaurant actually listen? Is any restaurant willing to step forward and agree to lower their sake prices? If you are willing to do so, please tell me and I will help spread the word.
Posted by Richard Auffrey at 4:00 AM

I understand the markup needed by restaurants, but agree that they are sometimes extreme. I'd like to see places adjust the markup the older the vintage becomes, due to increasing scarcity and longer cellaring costs. That seems fair to me.

I imagine you've seen my similar piece exposing wine by-the-glass gouging in Boston restaurants: http://chowhound.chow.com/topics/425221 Nothing gets people worked up quite like naming names. I encourage you to do something similar with sake pricing: show your math, so the restaurateurs have nowhere to hide on the subject.

Richard
A great post. Restaurant marksups are insane. Frankly, it's because of uneducated consumers and business expense accounts that they're so high.

There are basically three kinds of guests that buy wine at a restaurant, paying ludicrous prices. First, you get the business diners who don't cause about price because they're impressing somneone and it's on an expense account. Then you get the uneducated people who only have wine once a month.year/eon when out, so they don't know they're being extorted, or that the wine is crap either. Finally, you get those who know, but have enough disposable cash to not care.

Frankly, I find restaurants that have corkage fees that are $10-20 and bring my own bottle. If they aren't going to have reasonable prices, and I understand the cost of storage, service, etc, then I'm not going to buy their goods.

Interestingly enough, I don't understand the markup restaurants charge. From what I understand - and please, correct me if I'm wrong - but actually, the restaurants get better pricing than retail because they're typically buying in much smaller quantities than a store is. Now, I've yet to ask my reps what the exact differences are, but... I do know that sometimes I'm mistakenly quoted the on premise cost which is markedly different than my cost. Restaurant pricing doesn't go into the "book" we shop from - so I just don't see why they have to charge for a single glass almost the same cost as one whole bottle. Just throwing it out there... if anyone wants to explain, please feel free! And so it seems to me the same argument would hold true with Sake.

Thanks Kovas for your comments.

Hi MC,
I have been trying to speak directly to offending restaurants, to see if anything might get accomplished. If things do not change, then a future post might then specifically name names. Thanks.

Hi Matthew:
Thanks for your comments. I do love BYOB places, and the corkage fees make much more sense than the insane markups on restaurant wines.

Hi Rebecca:
Thanks for your input as I was unaware there was a difference in wholesale pricing between restaurants and wine stores. If true, that makes their markups even worse.