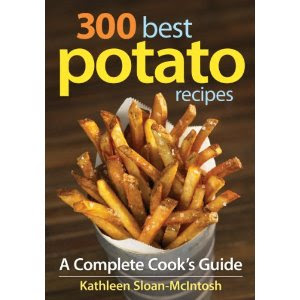 It was once referred to as an "edible stone" and "royal orange" though Spanish explorers ultimately gave this item its enduring name. Some people were suspicious of this item as it belongs to the same family as the poisonous deadly nightshade. The Germans once thought it might cause leprosy and the German philosopher Nietzsche felt that a diet predominantly of it led to alcohol use. What is the answer to this riddle?  I am referring to the almighty potato.

You'll find all this information and much more in 300 Best Potato Recipes: A Complete Cook's Guide, by Kathleen Sloan-McIntosh (Robert Rose, September 2011, $24.95), a trade paperback of 448 pages. Kathleen is a cookbook writer, recipe developer, and co-owner, with her husband Ted, of the Black Dog Village Pub and Bistro in Bayfield, Ontario. They also own The Black Dog Pantry, a specialty food shop. Kathleen's other cookbooks include: 100 Best Grilling Recipes: BBQ Food from Around the Word, Simply the Best: Food and Wine from Ontario’s Finest Inns, New Celtic Cooking, and A Year in Niagara: the People and Food of Wine Country.

The initial chapter, The Spud From All Angles, is a wealth of information and trivia on potatoes, including some history, nutritional information, background, recommendations and more. For example, did you know that the Irish were the first to refer to potatoes as "spuds," derived from the type of spade they used in cultivation? Or that the famed bank robber Dillinger carved a fake gun out of a potato and used it to escape from prison. This section also recommends different types of potatoes for varied preparations, such as baked, boiled, mashed, deep-fried and more. There is even a small bit on growing your own potatoes. This section will appear to cooks and food lovers or all kinds.

The next chapter, A World Of Potatoes, describes the basic categories of potatoes, generally based on their  starch content. These include Floury (high starch), All-Purpose (medium starch), Waxy (low starch), and Specialty (often heirloom varieties of varying starch contents). There are over 4000 potato varieties, an outstanding amount, but only 400-500 are in active production. The book contains a glossary of almost 200 of those potatoes, providing their Origin, Availability, Description and Uses, as well as sometimes a bit of additional information and trivia. This chapter is an excellent resource for when you encounter a strange potato.

The next ten chapters contain 300 recipes centering on the potato, from soup and appetizers to breakfasts and desserts. There are classic potato dishes, such as English Chips and Potato & Cheese Gratin. Recipes range across various cuisines, such as African Sweet Potato & Peanut Soup, Greek-Style Potato Salad, Potato Blini, Yorkshire Pudding Potatoes, and Netherlands Hotchpotch. There is a great diversity of recipes, and there should be plenty to appeal to any cook. Each recipe provides directions with ingredients in bold face, and a sidebar with various tips. Each recipe also starts with a brief description, advice, or history of the dish. Most recipes seem to be of easy to medium complexity, with maybe a few that might be more complex.

There are two sections of color photos, 8 per section for a total of 16, though that constitutes only about 5% of the recipes. I would have liked to see more photos, which can be very helpful to the recipes in determining what the final dish should resemble.

As I love potatoes, I found the first two chapters of this book to be especially fascinating. Many of the recipes also are interesting, and I think would be very useful. There is plenty of variety, and you'll find a potato dish to suit any of your needs. If you are a potato lover too, then I recommend this cookbook.