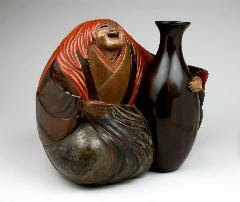 If you are wicked, then beware of white sake as it may poison you!

I previously discussed the tanuki, a legendary Japanese creature which loves to drink sake yet the tanuki is not the only supernatural creature in Japanese folklore which loves this delicious brew. The shojo is a Japanese sea spirit with long scarlet hair, red skin and a pronounced love for sake. In addition, the shojo possess magical powers which often seem to involve sake. The legend of the shojo actually has a Chinese origin, where they were called sheng sheng or xing xing. The term "shojo" translates as “heavy drinker” or “orangutan,” and sometimes is used as slang to refer to someone who really enjoys to drink.

In one Chinese legend, there was a young man named Kofu, a sake merchant who was also very dutiful to his parents. One of Kofu's new customers consumed vast amounts of sake yet never seemed to get drunk. When Kofu inquired of him, the customer stated that he was a shojo who lived under the sea. So, one day Kofu went to the shore, bearing a large pot of sake, and waited for the shojo to arrive. When he did, they spent time drinking and dancing and afterwards the shojo, who really liked Kofu especially because of his filial piety, rewarded him with a special pot of sake, which never emptied. This legend would later become the subject of a Japanese Noh play, a form of classical musical drama.

There is also a Japanese legend about events that allegedly occurred about 2000 years, when Mount Fuji  supposedly over night. Yurine, a poor man who lived nearby, loved sake and drank it almost every day. On the day after Mount Fuji appeared, Yurine got sick and could not drink his sake. Over time, he only got worse and finally decided he needed one final cup of sake before he died so he asked his young son, Koyuri, to procure some for him. But there was no sake in the house and they had no money so Koyuri was unsure what to do.

Koyuri took an empty gourd and wandered the beach, with no specific destination in mind. Fortunately for him, he eventually came upon a couple shojo, though Koyuri did not know it then, who were drinking an intriguing white sake from a large jar beside them. Koyuri pleaded for some sake for his ill father and they let him fill his gourd. Not only did Yurine love the sake, but it also seemed to make him feel better. So Koyuri returned to the beach four more times for sake and his father recuperated from his illness. But there was still a problem, a bitter and unpleasant neighbor named Mamikiko who loved sake but was poor.

He was jealous of Koyuri's sake and demanded some from the young boy. Yet when he tasted it, he quickly spit it out as he thought it tasted terrible, which puzzled Koyuri. Mamikiko then demanded that the boy take him to the source of the sake, which he did. The shojo let Mamikiko take some of the white sake and Mamikiko was initially very impressed with its aroma. But when he tasted it, he spit it out again because it had  a foul taste. The shojo then revealed their true identity, stating that their sake was sacred and could not only cure any disease but also granted long life.

But there was a catch, as not everyone who drank the sake benefited from it. Only those who were good and righteous gained the benefits while those who were wicked and evil found only a poison. Mamikiko panicked as he did not want to die, and started begging for forgiveness and stating he would repent and become a good person. The shojo believed that he was sincere and gave him a powder to counteract the poison. Mamikiko was true to his word and became a good man, making friends with Yurine. They eventually became partners, brewing white sake from a recipe given by the shojo, and both lived for 300 years.

So, it appears that those who are good people will most benefit from their encounters with shojo, and it certainly helps if you love sake. What sake lover wouldn't want a never-ending jar of sake, or a sake that granted long life? Ah, if only the legends were true.

As an aside, what is the nature of the shojo's "white sake?" It is unclear from the legend and I have not been able to find any definitive answers. It seems likely that it might simply be nigori, "cloudy" sake which contains sake lees and often has a whitish color. During that time frame, basically all sake was nigori, though the white color varied in intensity. The most ancient term for white sake may be nerizake, where "neri" means "to knead."  It seems that it was not until around the Heian era (794-1192 AD) that sake started to be separated from the lees, being placed into bags and squeezed to acquire just the juice.

A later term for white sake, which originated some time prior to the Heian era, was shiroki.  This was a special sake meant to be consumed by the Emperor and used in certain religious rituals, a type of sacred sake known as omiki. That would not be the same as the shojo's white sake, though it too was sacred. In the 17th century, another type of "white sake" was created, shirozake. It was created by the founder of the Toshimaya brewery, who claimed to have gotten the idea from a dream. Though white in color, it is not actually a sake but is a drink made from rice, koji and shochu. It is very sweet and the brewery still exists, continuing to make shirozake.

I haven't heard any recent reports of shojo sightings though.  Kanpai!
Posted by Richard Auffrey at 4:00 AM