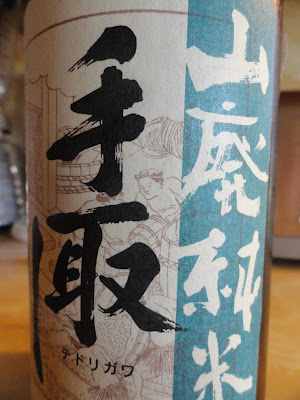 What is Shichimenchou-Zake? Well, I am not sure if it is an actual word or not, but it means "Turkey Sake." The term "shichimenchou" is the Japanese word for "turkey," and literally means "seven-faced or seven-sided bird." I simply added "zake" to the word, which is often done for sake related words. By turkey sake, I meant sake for Thanksgiving.

For Thanksgiving, I opened a number of bottles, ranging from a Lambrusco to a VORS (30+ year old) Oloroso Sherry. I like to have an assortment of wines, something for everyone, as well as enough to last throughout the day. Per my own Thanksgiving wine suggestions, I also opened a bottle of sake, which I have done before for Thanksgiving. I was pleased to see that this year I opened the same sake as the fine folks of Sakaya, Rick and Hiroko.

The Tedorigawa "Silver Mountain" Yamahai Junmai ($33) is produced by the Yoshida Sake Brewery, which is located in the Hokuriku region of the Ishikawa Prefecture, an area well known for excellent rice production. The brewery was founded in 1870 and its water descends from the nearby Mount Hakusan, which is a potentially active volcano. This sake brand is named after the Tedori River ("gawa" means "river"), and it is thought the river obtained its name from the fact people used to cross the river hand in hand due to its rapid flow. One meaning of "tedori" is that it refers to a "braiding method," resembling in some ways the people with their linked hands.

This sake is made from Gohyakumangoku rice, which was polished to 65%, and has an SMV +4 and an Acidity of 1.5.  As it is a Yamahai, no lactic acid was added to the yeast starter. Instead, natural lactic acid from the air was allowed to drop into the yeast starter, a process which usually takes twice as long and tends to give an earthy or gamey flavor to the sake. In addition, a Yamahai is generally richer in umami than most other sake types.

I found this sake to be dry and smooth, with only a mild earthy tone and a light tinge of sweetness. It went very well with our turkey, but also was able to stand up to the wild boar roast. It actually did well with our side dishes too, its higher than usual acidity probably helping in that regard. Sure, most people probably don't consider sake for their Thanksgiving dinner but it can be a very good pairing. That is something to keep in mind for Christmas dinner as well, especially if you are having turkey.

I also should briefly mention the Bodegas Sánchez Romate VORS Oloroso, a superb aged sherry which enhanced our Thanksgiving too.
Posted by Richard Auffrey at 4:00 AM

This sounds like an intriguing sake. What are some of the characteristics of Gohyakumangoku rice? Does it favor the slower method of lactic acid introduction? Does it contribute to the savoriness? I'm getting really curious about the parallels between varietal rice and grapes.

Hi Jason:
Gohyakumangoku rice tends to produce a very dry, light and tart Sake. I have never seen anything to indicate it is better for Kimoto/Yamahai styles. In short, rice contributes most to the flavor of a sake, but its contribution is much less than a wine grape. They say 80% of a wine is due to the grape, but only 20% of a sake is due to the rice. The other 80% is due to the method of production.

Thanks very much for your kind words. Kanpai!