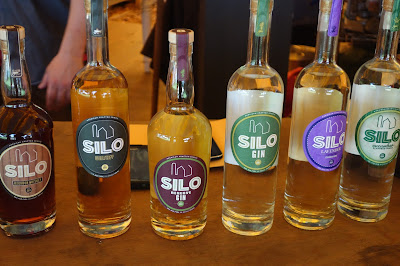 Craft distilleries are popping up all across the country and New England is home to at least a few dozen such spots. As part of TasteCamp Vermont, several distilleries, such as Caledonia Spirits (which I discussed yesterday), participated, showcasing some of their products at the tasting events. Some of the other participants included: SILO Distillery (vodka, gin, whiskey, liqueurs), Appalachian Gap Distillery (rum, whiskey, coffee liqueur, and more) and Stonecutter Spirits (single barrel gin).

At these tasting events, there was a limited time period to sample all of the wines, beers, ciders and spirits, so an attendee generally didn't have enough time to taste everything as well as spend some time speaking with the producers and their representatives. As such, you had to make decisions, usually hard decisions, as to what you wanted to taste first, knowing you might not get to sample everything you want. Such time periods were necessary though so we could experience a broad swath of Vermont's offerings and it is no different from many other tasting events where you can't taste everything that is available.

There are also other distilleries in Vermont which didn't participate in TasteCamp. The Distilled Spirits Council of Vermont, founded in January 2011, is "a cooperative, non-profit organization created to develop, promote, and maintain the distilled spirits industry in Vermont." It has about 16 members and their website has a map showing all of those distilleries. It is an excellent resource if you'd like to further explore the spirits of Vermont.

I'm going to highlight two other distilleries which participated in TasteCamp Vermont. 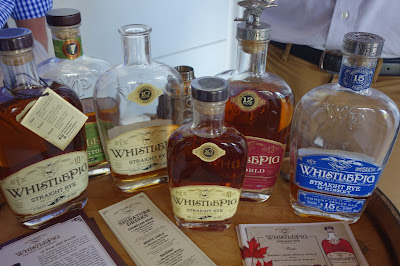 I've previously written about WhistlePig Rye several times, including most recently in Distillers Round Table--Dave Pickerell of WhistlePig. At TasteCamp, they presented several of their Rye Whiskies for sampling. I enjoy all of the WhistlePig products, and often use their 10 Year Old at home when making Manhattans.  My favorite though is their newest release, the superb, albeit pricey, 15 Year Old Straight Rye Whiskey ($199). This is one of the best Ryes I've ever tasted and it is worth every penny.

I previously wrote about their 15 Year Old: "The base of this rye is the 10 Year Old except it sits in the barrel for another 4.5 years and then is finished for anther 6 months in barrels of Vermont White Oak with a #4 char. At 92 proof, only 6000 bottles were released in the U.S. though more will be made available in September. This is a massively impressive rye, with such a phenomenal, complex melange of aromas and flavors. There is plenty of spice, caramel, butterscotch, vanilla, citrus, and even a touch of smoke. Every sip seems to bring something new to your palate and you won't want to quite sipping until the bottle is empty. It is a liquid aphrodisiac, decadently delicious with a sensual mouthfeel. I can't recommend it highly enough."

I look forward to see what WhistlePig releases next. 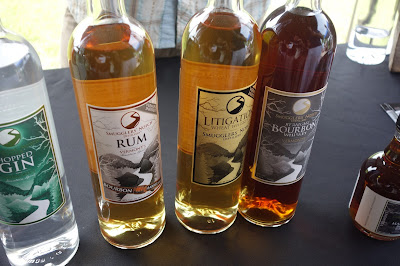 Smugglers' Notch Distillery is a father/son partnership of Jeremy Elliott, a research chemist by trade, and Ron Elliott, who has a business background. They founded their distillery in 2006 in Jeffersonville, Vermont, at the foot of Smugglers Notch, which many people may know as a ski resort. However, this area has a mountain pass that once was used for smuggling contraband in and out of Canada. This smuggling apparently began in the early 19th century, and would continue during Prohibition. The distillery opened to the public in 2010 and then produce a variety of spirits, including vodka, rum, whiskey and gin.

This small distillery somehow ended up the target of trademark litigation, being sued by Gruppo Campari which produced Old Smuggler, a blended Scotch whiskey. Fortunately,  they were eventually able to negotiate a settlement, which allowed Smugglers' Notch Distillery to keep their name, but all of their new whiskey releases need to possess a more original name. For their first new release since settling that lawsuit, they chose to call it Litigation Wheat Whiskey.

Released in October 2015, Litigation Wheat Whiskey is an unblended whiskey, at 92 proof, made from 95% wheat and 5% malted barley, and is aged in new Char #4 white oak barrels for 2-3 years. The aroma has sweet elements, bits of honey and caramel, with some floral notes. On the palate, it is pleasant and smooth, with tastes of caramel and honey, balanced with a hint of bitterness, with a touch of wood and some grassy notes. An interesting and complex spirit.

The Straight Bourbon is made from two different mash bills, using corn, rye and malted barley, and 5 different new charred American oak barrels. Bottled at 90 proof, this bourbon has a pleasing aroma of sweetness with a hint of spice, and on the palate, it is soft and elegant, with vanilla and honey notes, enhanced by a mild, spicy undertone and with a long and smooth, satisfying finish.

My favorite of their products was their Rum ($30), which is a single-barrel amber rum bottled at 105 proof. The rum is aged for about 3 years in charred white oak and then finished for another year in 4-year old ex-whiskey barrels. The barrels are stored in a heated warehouse, which replicates being in a warmer climate, which accelerates the aging process. I was impressed with the complex and delicious flavors in this rum, which had some similarities to a fine bourbon. And despite its high alcohol content, you wouldn't notice it in this smooth and well balanced rum. Such tasty flavors of caramel, vanilla, and baking spices with a lengthy finish. Highly recommended!
Posted by Richard Auffrey at 9:42 AM