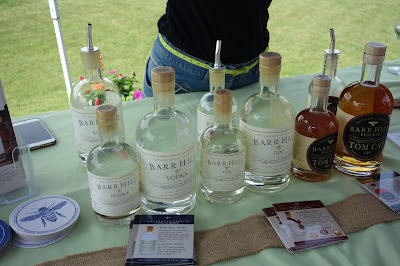 "The best fertilizer is always the footprint of the farmer."
--Thomas Hardie

At TasteCamp Vermont, Caledonia Spirits sampled their products at one of the group tastings and they were a huge hit, selling a significant amount of their spirits, especially their Barrel-Aged Gins. I'm not a fan of many Gins, because of their strong aroma and flavor of juniper, but the Barr Hill Reserve Tom Cat Barrel-Aged Gins impressed me thoroughly, and I had to buy some as well. This is Gin you could easily enjoy on its own, neat, or you could also use it in a cocktail.

The origins of Caledonia Spirits extend back to 1965, when distillery founder Todd Hardie started working as a beekeeper. He eventually became the apiary and bee inspector for the Vermont Department of Agriculture. In 2006, Todd started working with a local wine maker to produce mead, a natural fit considering his beekeeping, and founded Caledonia Spirits in 2010 in Hardwick, Vermont. Caledonia Spirits partner with local farmers and beekeepers to source organic grains and honey for their spirits, which basically include Vodka and Gin. Local sourcing is very important to them, as is the use of raw honey, as they believe it is a medicine, a food and a sweetener. 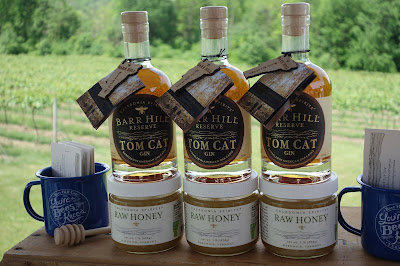 "The history of distilling is rooted in agriculture, and how to give value to a crop. When crops are used in distilling, they are also preserved and less expensive to transport."
--Caledonia Spirits

The Barr Hill Vodka is produced from 100% organic, raw northern honey and is 80 proof. There are no grains in this spirit. The honey is cold fermented for several weeks, essentially becoming a mead, before it is then distilled, using a pot and column stills. The resultant Vodka is gluten free and kosher, and they state that: "The spirit which emerges reflects the essence of the soil and flowers visited by the bees." I found this vodka to have a pleasing honey aroma, and up front, there is a mild sweetness, a nice rich honey with hints offloral elements. It is a Vodka that I think would work best in cocktails, providing more of a natural sweetness to the cocktail so you might not need to add another sweetner.

The Barr Hill Gin is produced from a neutral corn-based spirit, juniper and 100% organic, raw northern honey. It is 90 proof, gluten free and kosher. The honey is added a short time before bottling, providing a floral element to accompany the juniper, and interestingly enough, each batch of their Gin will vary to some degree, dependent on the specific seasons and blossom of the honey that is used. Not all honey is the same, so each Barr Hill Gin batch will have at least some mild variation. For my own preferences, the juniper flavor in this Gin is too prominent though Gin lovers will find much to love. And the addition of the honey does elevate the complexity of this spirit. 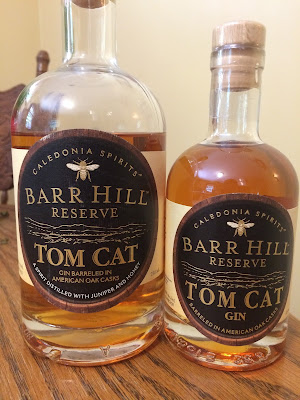 "The soul of a beekeeper is filled with the rhythms that flow through the seasons, reflecting the changes in the flowers, rains, sun and all the forces that are a part of this beautiful mystery."
--Caledonia Spirits

It is Barr Hill's Barrel-Aged Gins which are especially garnering great attention. For many Americans, barrel-aged Gins have only started coming onto the market no more than about ten years ago. However, the process has a lengthy history, extending back several hundred years. The Dutch placed their Genever in oak barrels and European Old Tom Gin also spent time in the barrel. Though you might think Gin is too delicate to age in a barrel, it seems to actually benefit well from such aging.

Caledonia calls their barrel-aged Gins "Tom Cat" which "is the modern day adaption of 18th century England’s most revered spirit, Old Tom gin. After gin was outlawed by the Spirits Act of 1750, rebellious pub owners would hang a wooden plaque shaped like a black cat to inform the passerby of their defiance of the ban. Deposit a few pennies through the cat’s mouth and a bartender would pour a ration of Old Tom to be sipped through a tube between the cat’s paws."

Their original Barr Hill Reserve Tom Cat Barrel-Aged Gin spends approximately 4-6 months in new American white oak barrels and is 86 proof, gluten free and kosher. The oak aging actually makes the spirit taste more like a whiskey than a gin, pushing the juniper flavor to a minimal element. There are still honey notes, enhanced by a spicy aspect and hints of vanilla and caramel. The floral elements are also more of an undertone, and the overall taste is complex and intriguing, delicious and satisfying. This is a spirit I could easily enjoy on its own, or showcased in a cocktail. It is a Gin that even those who dislike Gin are very likely to enjoy. It receives my highest recommendation.

Caledonia's newest release, which isn't even listed on their Spirits page yet, is the Barr Hill Reserve Tom Cat Barrel-Aged Gin which has been aged for about six months in Vermont white oak. In the recent past, when there was a barrel shortage, Caledonia began investigating the use of Vermont oak, collaborating with a forest, sawyer and cooper. The white oak is sustainably and selectively harvested from the Champlain Valley of Vermont. Once harvested, the oak is stacked and air dried for a year. The difference of Vermont oak is that it tends to have a tighter grain and possess more wood sugar, which adds more sweetness to the taste while also reducing tannins and astringency.

I found this Gin to be softer and more subtle than the other barrel-aged Gin. It is fragrant and elegant, with plenty of complexity and exciting flavors. There is still a whiskey element in this Gin, with a very subdued juniper taste, but it certainly is a more unique spirit in its totality. I would only drink this on its own as in a cocktail, you might lose some of the subtle flavors of this superb Gin. This also receives my highest recommendation.

As I've written before, WhistlePig Rye is also experimenting with Vermont White Oak. It's use is still in its relative infancy but it seems to me that it could be very important to the future of the Vermont drinks industry, especially due to the importance of local ingredients to many producers. I also foresee that other producers, from all over the world, might start looking toward Vermont White Oak to age their own products, from wine to spirits. We might be seeing a glimpse into the future through Caledonia's use of Vermont White Oak for their Gin.

All of the Caledonia spirits are probably available for sale in Massachusetts, though I'm not positive on the Vermont Oak-Aged Gin.
Posted by Richard Auffrey at 9:18 AM

Thanks for the kind words Richard! It was great to meet you at TasteCamp! Cheers - Hallie