Do you like to pour maple syrup on your pancakes or waffles? Do you enjoy maple & bacon doughnuts? Do you love maple squares for dessert? If you answered affirmatively to any of those questions, and even if you didn't, you might want to consider trying some alcohol made with maple syrup. I think you'll be quite surprised at how delicious such drinks can be.

At TasteCamp Vermont, we got to experience a number of maple-syrup based drinks and it was eye-opening to learn the diversity of those compelling products. It shouldn't be a surprise that Vermont would embrace maple-syrup based drinks as they are the country's largest producer of maple syrup, with over 1500 sugarhouses, making about 1.3 million gallons, approximately 42% of all the maple syrup made in the U.S. The history of maple syrup production extends back to the Native Americans, who probably taught Europeans how to make it.

Producing maple syrup is a relatively easy process. First, you place a tap into a maple tree and wait for the sap to drip down and accumulate in your container. Once the sap is then collected, i will be boiled until it becomes syrup. It will take approximately 40 gallons of sap to make 1 gallon of syrup, meaning that over 52 million gallons of sap must be collected! The maple syrup, which is then about 67% sugar, will be filtered and bottled. It is simple enough that you could make your own maple syrup at home. 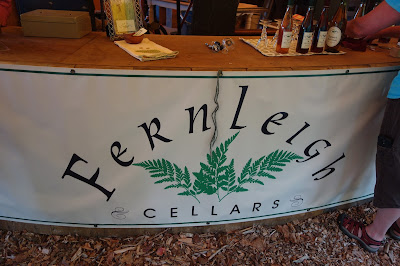 At one of the group tastings, I tasted some "fermented maple syrups" produced by Erin Hunter of Fernleigh Cellars.  Unfortunately, I tasted these intriguing items near the end of the tasting so I didn't have much time to speak with Erin. I thought I could later check her website but later found she doesn't have a website, just a Facebook page. And online research doesn't turn up much information about the winery or Erin. It is something I need to follow up on, to potentially interview Erin for more details on her winery because her products are amazing and unique. 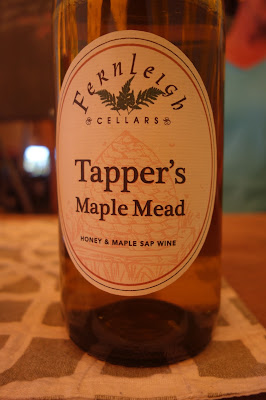 The Tapper's Maple Mead ($20) is made from honey and raw maple sap, and contrary to what you might think, it was more dry in style, with an interesting blend of floral and herbal flavors. It was quite tasty and intriguing, ask well worth checking out. Erin is currently working on producing a sparkling version of this mead. 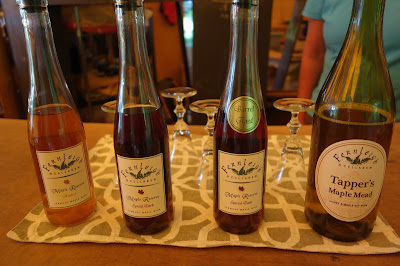 Next, I moved onto tasting three Fermented Maple Syrups. and overall, I found them to be well balanced and fascinating, delicious and complex. The maple element didn't overpower and I actually found that two of them reminded me of a good Sherry! These would be delicious on their own, but I could also see how they would work well in a cocktail too.

The Maple Reserve Amber ($28) was smooth and easy drinking, with a mild sweetness balanced by a saline character, a nice combination of sweet & salty. It was the lightest of the three fermented maple syrups, but still possessed a good complexity and a lengthy finish. This would make an excellent after-dinner drink, though it might also pair well with some spicy fare, or even fried foods. 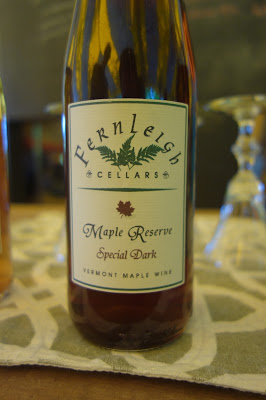 My favorite of the three was the Maple Reserve Special Dark, which reminded me of a sweet Oloroso Sherry. Again, it had a sweet & salty taste, with nutty notes and even some minerality (which was quite surprising). Complex and delicious, the pleasing finish lingered for a very long time. I was mesmerized by the flavors in this wine, amazed that maple syrup could create something this good. I'm not sure if you blind tasted someone with this wine if they would guess it was made from maple syrup. Highly recommended.

There is also a Barrel-Aged version of the Maple Reserve Special Dark, which is aged in whiskey barrels. This wine is darker in color, with fuller flavors including some chocolate and spice notes. It didn't remind me of a Sherry but is more similar to some Ports without any of the fruit flavors.

Unfortunately, Erin didn't have any of her wines available for sale at the tasting or I would have bought several. However, the next time I'm in Vermont, I will be seeking out some of their maple syrup wines and you too should seek them out. 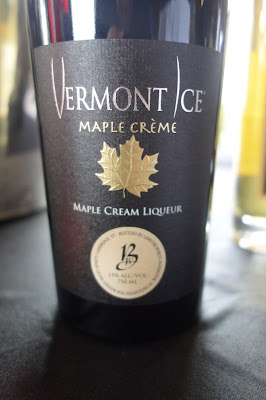 I first encountered the wines of Boyden Valley Winery back in 2009 at the Vermont Cheesemakers Festival and was impressed with what I tasted. The Boyden Farm is located in the Lamoille River Valley and has been family owned for four generations. The winery is inside a restored 1825 carriage barn and their vineyard has about 8000 grapevines. They produce European-style wines, including fruit wines, grape wines, dessert wines, specialty wines and hard ciders.

At TasteCamp, they showcase their Vermont Ice Maple Creme Liqueur ($30), which is produced from their estate maple syrup, apple brandy (made from Vermont apples) and real cream. This liqueur is creamy and smooth, with a mild maple taste which doesn't overwhelm. It has s rich mouthfeel and tastes much better than some of the big commercial cream liqueurs which aren't made from natural ingredients. A perfect ending after dinner, or it would be an intriguing ingredient for cocktails too. Highly recommended.

One of the most unusual maple-based drinks was produced by the Appalachian Gap Distillery, which is located in Middleburg, Vermont. They produce a variety of spirits, including rum, whiskey and coffee liqueur. They also make Papilio, named to honor the state butterfly, which is a blend of blue agave nectar and maple syrup! You could almost think of it as a maple-flavored tequila, though obviously as it isn't produced in Mexico it cannot be called a tequila. The spirit is composed of 80% Organic Blue Agave Nectar from Jalisco, Mexico, and 20% Dark Maple Syrup from Cabot, Vermont. It was interesting, a relatively smooth, sweeter form of tequila with maple notes.

It is cool to see how a number of Vermont producers are using maple syrup, such an important local ingredient, and creating some delicious and intriguing beverages. Most of these drinks may never be available outside of Vermont, so it is an added incentive for you to visit Vermont and explore the bounty of what that state has to offer.

Posted by Richard Auffrey at 11:32 AM

Thank you Richard! You should come visit us here at the farm. I have plenty for sale and would enjoy showing you around!
You can contact me at fernleighcellars@gmail.com
Cheers