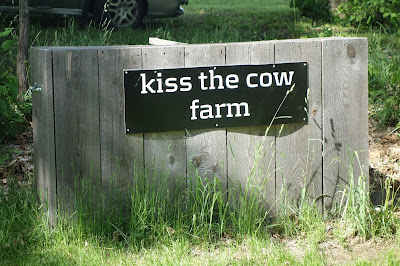 "Vermont winemaking offers an opportunity to participate in a modern economy with an artisan product that is true to an agricultural heritage and ethic of craftsmanship for which Vermont is widely recognized."
--Todd Trzaskos in Wines Of Vermont

Vermont is well known for maple syrup and cheese, Bernie Sanders and Ben & Jerry's, skiing and leaf-peeping. However, its drinks industry, including wine, beer, cider and spirits, is lesser known for many people. Of all those drinks, its beers may have the greatest recognition beyond the state lines, though it is interesting that historically, there were few commercial breweries in Vermont. Currently though, you'll easily find over 40 commercial beer breweries in the state. Vermont entire drinks industry, though still relatively young in many respects, needs more recognition as there are a number of excellent producers worthy of your attention.

This past June, approximately 35 writers and their significant others, attended TasteCamp 2016, which was held in Vermont. TasteCamp was created by Lenn Thompson, of the New York Cork Report, back in 2009, and the concept is a weekend immersion into a wine region for a small group of wine writers. We have visited places such as Long Island, the Finger Lakes, Quebec, Virginia, and Niagara. This year, the TasteCamp attendees included people from both Canada and the U.S., with a couple people coming from as far away as California. It's great to see wine lovers willing to travel such a distance to explore a small region where most of their products aren't sold outside of the state. 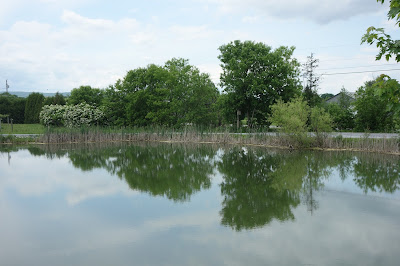 "Wine offers Vermont the opportunity to blend the components of its geographic, agricultural and cultural past to enhance its evolving modern identity."
--Todd Trzaskos in Wines Of Vermont

The TasteCamp group generally visits a variety of producers, tours vineyards, tastes dozens of wines, dines on local foods and holds a fun BYOB dinner. Over the years, the scope of the concept has evolved so that it is no longer limited to wine, and now also includes beers, ciders and spirits, noting how local regions have developed fascinating drinks industries. A key principle for TasteCamp is "drink local," consuming products that are locally produced, usually from local ingredients. There is little reason to limit ourselves to wine when local producers are making so many interesting and tasty beverages.

Each TasteCamp has a limited number of sponsors and the attendees shoulder the lion's share of expenses for the trip, including their transportation, lodging and most meals. With its limited size, TasteCamp is a more intimate event, allowing you to get to know everyone in the group, reconnecting with old friends and meeting new ones too. The focus of the event is on tasting, both food and drink, and there aren't any seminars or events about writing, blogging, photography, or similar activities. 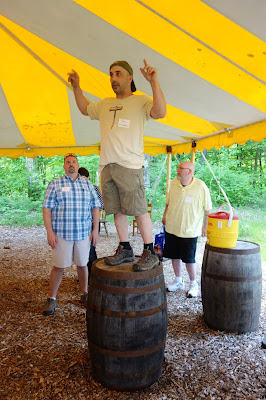 "Vermont winemaking is hard work but also an honor, an opportunity to commune with the land and to make something special."
--Todd Trzaskos in Wines Of Vermont

TasteCamp is a curated event, intended to showcase some of the best of the region. This year, a huge debt is owed to Todd Trzaskos (pictured above atop the barrel), of Vermont Wine Media and author of the book Wines Of Vermont, for all his hard work and dedication in helping to plan, organize and curate TasteCamp Vermont. His efforts helped to make this one of the best TasteCamps ever. Lenn Thompson, Remy Charest and myself also contributed to the organization and planning of this event. The attendees learned much about Vermont, acquiring a new appreciation for this region, and spreading their new passion to others.

To understand the present, it can be worthwhile to understand something about the past, to see some of the origins of the drinks industry in Vermont. Almost two hundred years ago, Vermonters were drinking a significant amount of alcohol. "While estimates vary on daily consumption in the United States during this period, it is generally agreed that the average adult consumed around five gallons of spirits, a barrel’s worth of beer and untold amounts of hard cider over the course of a year. A simpler breakdown would be around seven drinks a day per man, woman and child." (Vermont Prohibition: Teetotalers, Bootleggers & Corruption by Adam Krakowski).

Around 1820, there were over 200 distilleries in Vermont (more than the number of towns in the state), and it is thought that Gin was the most widely produced spirit. Curiously, there were few beer breweries during this period, which was due in part because many people made beer (and cider) at home and they could even find beer recipes in local newspapers. However, the 1820s also saw the rise of the temperance movement, such as the founding of the Vermont Society for the Promotion of Temperance. 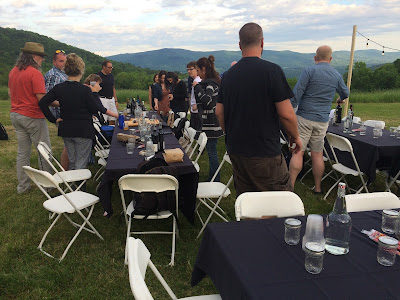 "Vermont's wines represent the unique qualities of place, the inspirations and aspirations of its people, and offer something that the world at large might enjoy."
--Todd Trzaskos in Wines Of Vermont

The temperance movement was apparently quite influential in Vermont and in 1852, a state mandated prohibition on alcohol was passed, effective March 1853. Contrast that with Federal Prohibition which didn't begin until 67 years later, in 1920. The main focus of the Vermont prohibition was on distilled spirits, with lesser restrictions on fermented alcohol. For example, people were permitted to make their own fermented alcohol at home for their own consumption. There was also another law that people could consume alcohol at their home, provided it didn't cause intoxication. It seems the law was fascinated with the idea of intoxication as the only beers that were prohibited were those which were found to be "intoxicating" and there would eventually be legal cases on that very issues.

The production of hard cider was also permitted, for a number of reasons and with some restrictions. For example, you couldn't add any additional fermentable sugars to the cider. The government also felt that with the ease of cider production, and the myriad of apple trees in the state, that it would be impossible to enforce a prohibition on cider. Plus, cider provided important nutritional benefits as water consumption was still risky. Prohibition thus led to a surge in hard cider consumption, which eventually bothered the temperance movement which finally got hard cider production banned in 1880. 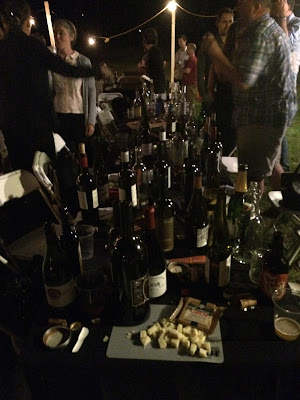 "When newcomers to Vermont wine realize where the wine in their glasses comes from, they may think that the people making it are crazy."
--Todd Trzaskos in Wines Of Vermont

Like Federal Prohibition, Vermont prohibition was generally ineffective, especially considering their border with Canada. Plenty of illegal alcohol passed across the border and law enforcement seemed relatively useless in stopping the majority of the flow of this bootleg alcohol. Prohibition though did decrease revenue, from alcohol sales, for the state and it also decreased the amount of tourism, hurting many communities.


After prohibition ended, Vermont was not quick to rebound and it wasn't until approximately 30 years ago that the alcohol industry started to establish itself once again. As such, their drinks industry is still relatively new, in many aspects, yet they have come far in a short time. There is certainly plenty of room for growth but there is much to be proud about now, and is worthy of your exploration.

"Winemaking in this place may be just a bit crazy, but it is more truly the mark of a certain kind of bravery (possibly fortified by wine), that emboldens growers, producers and supporters of the endeavor."
--Todd Trzaskos in Wines Of Vermont

Since 2009, I've written a number of articles and reviews of Vermont wine, cider and spirits. In prior year's, I've attended the Vermont Cheesemakers Festival which not only offered an abundance of cheese but also presented some of the wines, ciders, beers and spirits of Vermont, from Boyden Valley Winery to Whistle Pig Distillery. Most recently, I've written about Mad River Distillers, more on Dave Pickerell & Whistle Pig, Eden Speciality Ciders, and Shacksbury Cider. Over the years, I've seen a clear improvement and evolution of their wines, ciders and spirits. TasteCamp helped to solidify my positive impressions of the current status of Vermont's drinks industry.

In the coming weeks, I'll be sharing what I experienced in Vermont, highlighting plenty of interesting wines, ciders, and spirits, as well as some compelling food. This summer, as well as in the coming fall, you should visit Vermont to taste your own way through some of the best the state has to offer. It's only a short drive from Massachusetts and there is much to see and do in Vermont. It's certainly one of my favorite places to visit and in my subsequent articles, I'll give you more motivation to travel to Vermont as well.

I'll also be looking forward to next year's TasteCamp.

"This is just the beginning of history for the wines of Vermont."
--Todd Trzaskos in Wines Of Vermont
Posted by Richard Auffrey at 3:00 AM

Vermont consistently produces excellent cheeses, taking more dozens of medals in competitions. And its beers are well crafted, excellent and worthy of more recognition as well. If I could live anywhere besides Boston, it might easily be Vermont!