The North Shore and South Shore-themed menu, priced a la carte, will include the following items:

2) In celebration of the 7th Annual Kiehl’s LifeRide for amfAR, Kiehl’s President Chris Salgardo and amfAR CEO Kevin Robert Frost, along with a crew of celebrity riders, will arrive in Boston on Wednesday, August 10, from 11am-12pm, for a special event at the Kiehl’s store on Newbury Street.

The event is free and open to the public and will consist of meet & greets with the riders, complimentary skincare treatments, music from local artists and small bites from Alden & Harlow and Waypoint Chef/Owner, Michael Scelfo. To continue this spirit of local giving, for the first time ever, Kiehl’s will be donating $5,000 to AIDS Action Committee of Massachusetts in an official on-site check presentation.

Kiehl’s LifeRide for amfAR is an annual multi-day, multi-state charity motorcycle ride to raise funds and awareness for amfAR, one of the world’s leading non-profit organizations dedicated to finding a cure for AIDS. This year’s 11-day ride will kick off in Kiehl’s hometown of New York City on August 3rd, with stops in Long Island, Hartford, Provincetown, Boston and ending in Philadelphia on August 13th.

Follow the journey and join the conversation by using #LifeRide7

Every customer who visits Kiehl’s on Newbury St. on August 10th will receive a 15% discount on all purchases, with the exception of charitable products and value sets. Kiehl’s will donate that 15% to amfAR, up to $125,000.

The cure is in your hands: 100% of net profits from the sale of Kiehl’s Limited Edition Ultimate Strength Hand Salve, a jumbo size of the brand’s classic formula ($28.50), up to $25,000, will benefit amfAR.

3) On Saturday, August 27,, from 1pm-5pm, The Wine ConneXtion, located in North Andover, is bringing Boston’s chef, restaurateur and “Top Chef” finalist Tiffani Faison of Tiger Mama and Sweet Cheeks Q, to the North Shore for a complimentary tasting of her BBQ and biscuits which will be paired with their robust red wine blends and exclusive small batch bourbon.

Tiffani Faison is an American chef, restaurateur, culinary consultant and television personality who rose to fame after her stellar performance on Bravo’s “Top Chef” series. Recently named “Best Chef of 2016” by Boston magazine, Tiffani spent much of her childhood in the South, which inspired her first restaurant, Sweet Cheeks Q. In 2011, Sweet Cheeks Q took Boston’s Fenway neighborhood by storm with delicious Southern-style food and inspired cocktails served in a welcoming, family-style space. Sweet Cheeks has been awarded “Boston’s Best Barbecue” by both Boston Magazine and The Improper Bostonian and featured in Food & Wine, Forbes, Travel & Leisure, CBS’ “The Dish,” NBC’s “The Today Show,” People, and The New York Times, to name a few. In 2015 Tiffani opened her newest concept, Tiger Mama, which is located just steps away from Sweet Cheeks on Boylston Street, featuring playful interpretations of Southeast Asian-inspired dishes set in a funky, transporting space.

All afternoon, the staff at The Wine ConneXtion will be pouring samples of robust red wine blends and specialty bourbons from their BackRoom which will complement signature BBQ dishes that will be prepared onsite by Tiffani Faison herself. As guests sip on summer’s savory spirits and bold blends, they will have the chance to meet Tiffani and try her famous Southern-style eats, including her excellent biscuits.

Tasting is complimentary. Walk-ins welcome all day, must be 21+.

The sundae bar will be available from 5 p.m. onwards will offer a selection of ice cream flavors infused with homemade vanilla bean-infused Ketel One vodka and a variety of unlimited toppings for $15.

In addition to the build-your-own boozy sundae bar, complimentary chips, guacamole, and salsa will be provided. DJ Dolo will also be spinning beats on the patio from 7 p.m. to 10 p.m.

5) $1 Oysters, all week long! Starting August 1, Bar Boulud, Boston is making oysters more affordable. As a permanent addition to their menu, they will now serve freshly-shucked Malpeque oysters from Prince Edward Island for just $1 from 2pm-6pm, Monday through Friday, in the bar, lounge and terrace areas of the restaurant. With most places offering oysters for $2-$3 per oyster, if not more, this is a nice bargain, especially as it isn't a temporary special. Get your brine on & order some oysters with a nice chilled Rosé wine.

6) And more Oyster joy! Saloon, in Davis Square, is now serving up new oyster-themed specials available through Labor Day. Dubbed “Mollusk Madness,” executive chef Shayne Nunes will be shucking $1 oysters from local waters served with classic cocktail sauce and a red wine mignonette. (Saloon’s delicacies of the sea normally are priced at $15 for a half-dozen and $30 for a dozen.)

To complement the blissful brininess of the bivalves, the beverage team will shake up a specialty cocktail, Mother of Pearl, made with Scotch, lemon, Combier, St-Germain and Amaro Averna ($10).

WHEN: Available daily through September 5 from 5:00pm-7:00pm 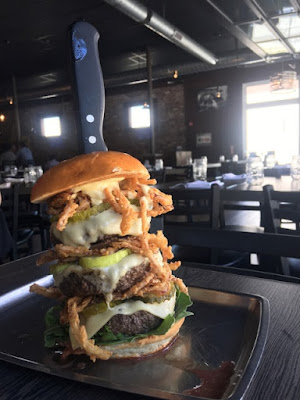 7) Are you up for a mighty Burger Challenge? In honor for the 2016 Olympics, A&B Burgers, one of my favorite burger spots, is bringing back their "Challenge Burger" from August 5th-August 21st. This Triple stacked, fully loaded burger weighs in at nearly 2 LBS. Wow!

What will you find on this Burger? Three Beef Patties, three layers of American Cheese, 3 Fried Eggs,  3 layers of Pickles, 3 layers of Haystack Onion Rings, Arugula, and AB Sauce (creamy feta, garlic base, aji amarillo deliciousness). All stacked between a Brioche Bun. And it only costs $21! That is a real bargain for such an enormous burger.

Anyone who is willing to accept this challenge will be timed and in the running for a Gold, Silver or Bronze medal. Winners will be announced on August 22nd and given an A&B gift bag.

So who wants to come with me and attempt this challenge? How fast can you devour this huge burger?
Posted by Richard Auffrey at 3:00 AM