As I've said before, it seems to me that Baijiu, an intriguing distilled spirit that originated in China, seems to me to be the Durian fruit of the spirits world. Both have a reputation for possessing a funky smell which turns off some people, while others are fervent fans of both the smell and taste. Baijiu is actually the most popular spirit in the world yet most Americans know little, if anything about it. However, it is a compelling beverage and I strongly encourage everyone to seek it out and sample some of its wonders.

If you want some more information about Baijiu, you can check out my recent articles about this fascinating spirit.

Next week is also a great time to celebrate and learn more about Baijiu. A week from today, on Tuesday, August 9, it is World Baijiu Day. This holiday was created by Jim Boyce, who runs the nightlife blog Beijing Boyce and wine blog Grape Wall of China. The intent of the holiday is to raise exposure of Baijiu, to spread awareness beyond the borders of Chin

Over 40 venues, in 24 cities, are participating in this holiday and you can check out a list of those venues, those bars and restaurants, which are planning Baijiu celebrations. Some of these spots are even celebrating right now, making it an entire week of celebrations. You'll find a diverse variety of ways that these venues are showcasing Baijiu, from cocktails, liqueurs and infusions to chocolate, pizza and beer.

Jim Boyce says, "It's part of a theme of going "beyond ganbei", the typical practice of draining shots of room-temperature baijiu, one that turns off many people." He also stated, "Like many others, I've had those reckless ganbei sessions that left me wondering if I could look at a bottle again," says Boyce. "But this spirit has a long history, an impressive range of styles and, as we saw last year, can work with cocktails and infusions and foods." 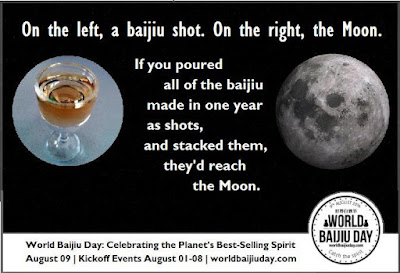 In the Boston area, there is a single restaurant, Red Lantern, that is participating. At Red Lantern, they carry Strong Aroma Style Baijiu including Hong Kong Baiju ($10), Luzhou Laojiao Zisha Daqu ($9), Mianzhu Daqu ($9), Shui Jing Fang Wallaby ($20), Wu Liang Ye ($42) and one Sauce Aroma Style, the Kweichow Moutai ($40). These are also available in a Tasting Flight of 3 brands (1/2oz pours) for $33. In addition, Brother Cleve has created a special Baijiu cocktail for them, the Peking Mule ($12), which is made from Mianzhu Daqu, Plum Shrub, Black Walnut & Ginger Beer.

In the rest of the U.S., there will be celebratory events in Asian City in Houston; Peking Tavern in Los Angeles; Lumos in New York City; Jock Lindsey's Hangar Bar & Trader Sam's Grog Grotto in Orlando; Vinn Distillery in Portland, Oregon; and Jackey Cafe, Panda Gourmet, & Wok and Roll in Washington.

You can hold your own World Baijiu event with friends and family. Just seek out some Baijiu at your local spirits shop and have your own tasting party. Baijiu is becoming more readily available at liquor shops in the U.S., though previously you might not have even realized it existed. Although Baijiu is hugely popular in Asia, it needs much greater exposure in the rest of the world. It is a unique and delicious spirit and well worth seeking out.

Expand your palate and try something different and more unique. Taste some Baijiu and celebrate World Baijiu Day!
Posted by Richard Auffrey at 9:58 AM