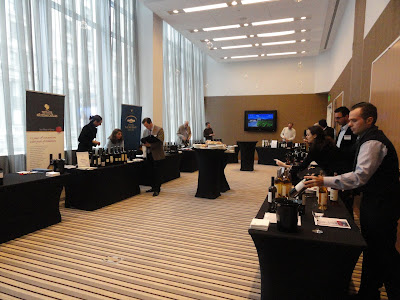 As I mentioned the other day, I recently attended a trade tasting of about 75 Greek wines held by Athenee Importers. Many of the producers were the same as at last year's tasting, and they also showed some of the same wines, though some with newer vintages. I am going to present some recommendations of the wines I tasted, as well as mentioning the wines I retasted this year which I still found compelling.  For those wines I retasted, I will link to my prior review. 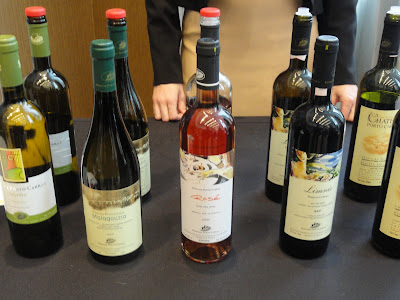 Argyros Estate:
--2010 Atlantis White: I tasted and reviewed the 2008 last year.  The 2010 seemed to have more grapefruit and lemons flavors than the prior vintage.  Still a good, simple summer wine.
--2009 Aidani: Made from 100% Aidani, an indigenous grape and this winery is the only one to produce a wine from 100% Aidani, rather than use it as a blending grape. This was an intriguing wine with a melange of smokiness (due to the soil), herbal notes, minerality and muted citrus fruit.  Crisp and easy drinking, this wine had character and impressed me with its pleasant mix of tastes.
--2008 Mavrotragano: Made from 100% Mavrotragano, this grape only grows on the island of Santorini and is their most important red grape. This wine probably needs more aging before reaching its potential, but it still was an interesting and tasty wine. Lots of spice, raspberry and black cherry notes, smooth tannins and a fairly lengthy finish.  It did bring to mind some Italian wines, yet still has its own unique flair.  Would love to try this with some lamb or venison.
--2002 Vin Santo Mezzo:  (Tasted and reviewed last year). I should note that Greek "vinsanto" is not the same as Italian Vin Santo, and a recent ruling of the EU has stated that Italy may no longer use the term. Greek "vinsanto" refers to Vino di Santorini (Wine of Santorini). Grapes for vinsanto remain on the vine to get very ripe, and then will be sundried for 7-15 days.
--1989 Vin Santo: This was even better than the 2002, with a richer and darker amber color, and less apparent sweetness on the palate. It was silky smooth with a complex blend of delicious and tantalizing flavors and a lengthy, satisfying finish. An amazing wine sure to impress any wine lover. 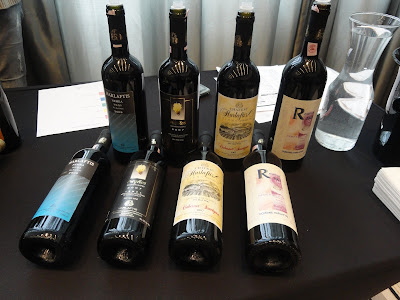 Ktima Pavlidis:
--2008 Thema Rose: I tasted and reviewed the 2007 last year.  Only difference from the last vintage seemed to be some more floral notes on the nose and palate.  But once again, a delicious and fun wine.
--2007 Tempranillo: Though not a grape you would suspect to find in Greece, this wine shows that very good wines can be produced from it.  The fruit flavors, blueberry, blackberry and black cherry, were prominent without it being a fruit bomb, with hints of underlying spice and a mild herbality.  Smooth, good acidity and a pleasing finish. 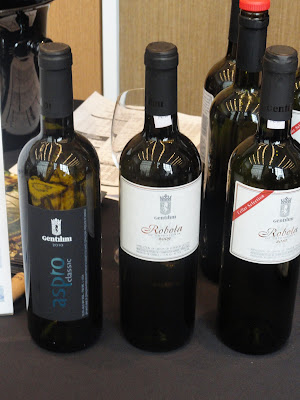 Gentilini Winery:
--2010 Aspro: I tasted and reviewed the 2008 last year.  The 2008 had been one of my favorite white wines of last year's tasting, and the 2010 also takes that honor this year.  I think the fruit flavors were more lush this year, though there were still flavors of honey and herbs too. Though the wine intially strikes you with its powerful flavors, you soon realize there are more subtleties beneath the surface.  A highly recommended wine.
--2009 Robola: The Robola grape is primarily grown in the island of Cephalonia, and interestingly enough, the grape name is restricted to this island.  Though other regions can grow and use Robola, they must call it by some other name. This white wine was very aromatic, with delicious flavors of peach and melon, and a backbone of minerality. 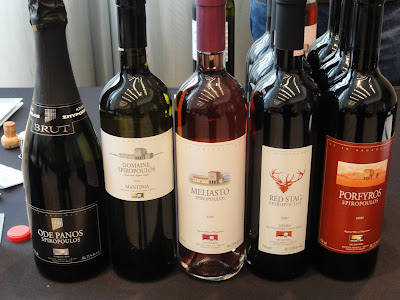 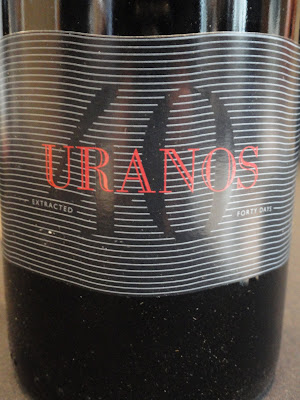 Thimiopoulos Vineyards:
--2007 Ghi kai Uranos: The wine's name means "Earth & Sky" and is produced from 100% Xinomavro. Though this winery was at last year's tasting, I don't recall whether I actually tasted this wine or not.  If I had, it did not leave an impression on me though at this tasting, it did stand out to me. The wine is biodynamic (though not yet certified), has seen eighteen months ion oak, and is unfiltered. It was an elegant wine, reminding me partially of a Pinot Noir.  It had a spicy nose and that spice was also prominent on the palate, along with some smokiness and black fruit flavors.  It had good complexity, smooth tannins, and was nicely balanced. A more subtle yet compelling wine. 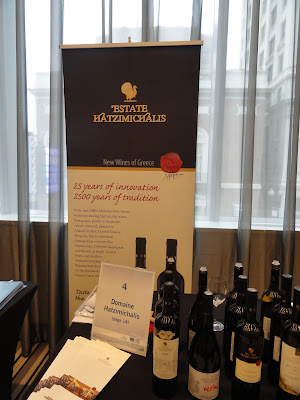 Domaine Hatzimichalis:
This winery, with the tongue twister of a name, was new to this year's event. It is located in Central Greece, in the valley of Atalanti, said to be the birthplace of Dionysus.  There is a turkey on their wine labels, which reflects the fact that the winery owner used to raise turkeys before getting involved in the wine business.

--2008 Kapnias White: Kapnias derives from the Greek word "kapnos" which means "smoky."  But, the term also extends to an ancient myth, the kapnias ambios, which was a vine that produced both white and red grapes. I haven't been able to find much on this myth yet, but am still seeking more info about it. The wine is made from 100% Chardonnay which has spent 8 months in barriques on the lees. Though the oak is noticeable, it has not produced an overly buttery Chardonnay. Instead, the wine actually is smokier with some tropical fruit flavors and touches of vanilla and honey. Though made from an international grape, this wine seems to possess a more unique character than many other Chardonnays.

Union of Winemaking Cooperatives of Samos:
Another newcomer to this tasting, the Union brings together 26 winemaking cooperatives on the island of Samos, the homeland of the ancient philosopher Pythagoras.  All of their wines are made from white Muscat, the Muscat blanc a petits grains.  Most of those wines are also sweet, though some dry wines are also produced.

--Sweet Muscats: I tasted four of their sweet Muscats, including the 2008 Vin Doux, 2005 Grand Cru, 2002 Nectar and 1999 Athemis. They were certainly very good wines, but they were generally too sweet for my personal preferences. They were more syrupy in nature, albeit with interesting and complex flavors. If you enjoy very sweet wines, then you might very well love these.
--2009 High Peaks: This is their dry Muscat and presents as a very typical Muscat wine, with strong aromatics and lots of herbal flavors.  I really enjoyed this wine and would love to pair it with an herb roasted chicken or even pork.

Where did you purchase the Greek wines, and could you recommend a bottle for a gift?

Hi Sarah:
All of these wines were at a local tasting. Are you in the Boston area? What price point are you looking for as a gift?