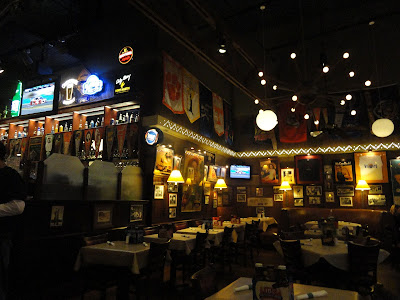 While attending the Mohegan Sun Wine Fest, I had a hankering for fried chicken and decided that maybe dinner at Big Bubba's BBQ could satiate my craving. The restaurant serves BBQ and southern cuisine, and there are three New York locations in addition to their Mohegan Sun location. The Executive Chef is Francis Collymore, a native of Barbados, whose resume includes a five year stint at Virgil’s Real BBQ in New York City, first as Executive Sous Chef and later as Executive Chef. Since 2001, he has been the Executive Chef at Big Bubba's BBQ. 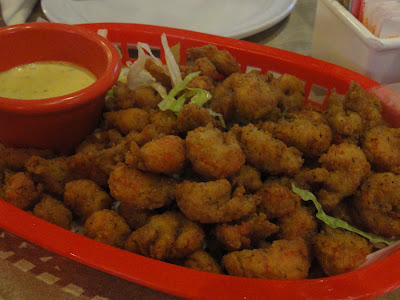 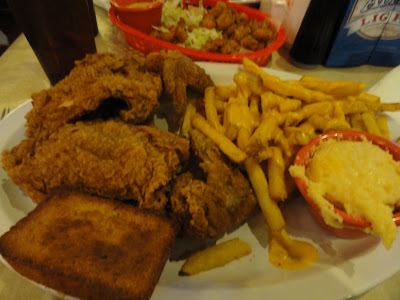 We began our meal with an appetizer of Mardi Gras Popcorn Crawfish ($9.95), a hearty basket of crispy crawfish which was a good meal to start our dinner. My companion ordered the St. Louis Pork Ribs ($22.95) and raved about their taste, very tender and flavorful pork which easily fell from the bone. I tasted them and was very pleased with their flavor too, definitely very well made ribs.

For myself, I ordered the Finger Lickin Fried Chicken ($16.95, $2 more for all white meat), which comes with 2 Sides and iron skillet cornbread. I decided to get the Cheese Grits and French Fries with cheese. What a platter of food! I received two large chicken breasts and two wings, more than enough chicken to satisfy my craving. In addition, it was superb fried chicken with a nice crispy and well seasoned coating and very moist, tender white meat. Perfectly cooked chicken, and I was only able to finish the breasts and never made it to the wings. I would highly recommend their fried chicken. The fries were fine though the cheese grits were just ok, not the creamy grits I prefer. But all I truly cared about was the chicken and it was well worth the price.

Service was very good, prices were reasonable considering the quality and quantity of the food, and my craving was more than satisfied. Kudos to Bubba! 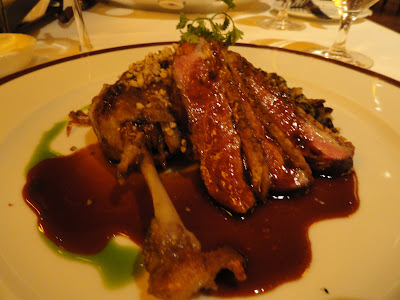 On my second evening at the Mohegan Sun, I ended up at Bobby Flay's Bar Americain, which is a more higher-end restaurant, with a menu of more American favorites, some with a southern flair, as well as plenty of fresh seafood. Its menu is moderate sized, with a Raw Bar, Appetizers ($11-$17), Entrees ($24-$49), Steaks ($39-$46) and Sides ($9). Plenty to choose from and many of the dishes sounded appetizing. There were several dishes which appealed to me and it took me a little bit to decide which to order.

I began the dinner with a Dark and Stormy cocktail, though it was not made in the traditional manner, and was more like a martini. It just didn't taste like what I expected and I much prefer the traditional version. Fortunately, that was my only complaint of the meal.

My dining companion and I started with a dozen Oysters ($36), three different types, and they were clean and tasty, each type providing its own unique flavor profile. My dining companion then ordered the Buttermilk Fried Chicken, with Honey, Pink Peppercorns, Lime, and Black Pepper Biscuits ($29). He enjoyed his meal and I also tasted the chicken, finding the crispy coating to have a sweeter taste, but still good, than what I had at Bubba's.

I decided on the Duck with Dirty Wild Rice, Pecans, & Bourbon ($34), which is pictured above. Slices of tender breast breast and a confit leg, I was very pleased with its taste, enjoying the bourbon flair in the sauce. As a side, I ordered the Hot Potato Chips with Blue Cheese Sauce ($9) and they were a decadent delight, dipping the crisp chips in the creamy and tangy sauce. I almost could have made a meal just of the chips and sauce.

Service was good, the food was tasty, and I would return.

I also bookmarked and tweeted this. Thank you so much for showing great concern for other people. Much Respect.Halal Food Perth