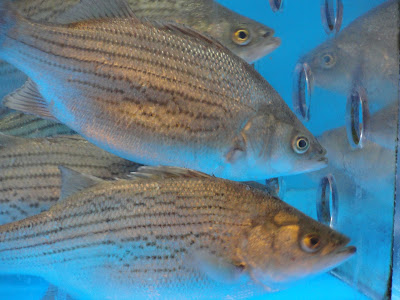 "Sustainable fisheries and aquaculture means the harvesting and farming of fish stocks in a manner that meets the needs of the present without compromising the ability of future generations to meet their own needs."
--Fisheries & Oceans Canada

On January 24, 2011, Legal Sea Foods held a "black-listed" seafood dinner which garnered lots of publicity and controversy, especially pre-dinner. Yet almost all of that publicity died out about a month or so after the dinner took place. I continued to delve into issues raised at that event, desirous of understanding more about such matters. So, a year later, I wanted to follow up with Roger Berkowitz, the President and CEO, to get his thoughts on the dinner and what has changed, if anything, since that event. As seafood sustainability is such an important issue, I felt it would be valuable to evaluate the impact of this controversial dinner.

I first posted about this dinner back in December 2010, listing the event and noting its controversy. The most controversial aspect of their press release was the following: "Over the last few years, news reports on the sustainability of seafood have become more frequent, causing widespread discussion on what fish is sustainable, and therefore safe to eat. Unfortunately, this discussion is flawed by outdated scientific findings that unfairly turn the public against certain species of fish. In a direct effort to counter existing misinformation about sustainability, the menu for this event is deliberately designed to serve what is commonly believed to be outlawed or blacklisted fish."

That language angered some people, and a few of the reactions were even extreme, such as a call for a boycott of Legal Sea Foods, before the dinner even took place. My own response was more measured, allowing Legal the chance to present their position at this dinner but noting their significant burden. I stated: "But Legal better be prepared with lots of answers for the questions they will inevitably be asked. Their failure to respond, or lack of information, could be very detrimental. The Legal representatives at the dinner cannot pass the buck, claiming that others in the organization not at the dinner have the answers. They must be fully prepared to discuss and debate the issues."

I attended the dinner and then posted my thoughts, noting that Berkowitz had been intentionally provocative but he also had the goal of opening up a discussion into important seafood sustainability issues. I did not let the issue die there though, and followed up with Berkowitz after the dinner, for additional information on some of what he discussed during the dinner, including the Vietnamese shrimp farm and the OAWRS detection system. I am unaware of anyone else who ever followed up on these issues after that blacklisted dinner, yet I felt it it necessary to do so. 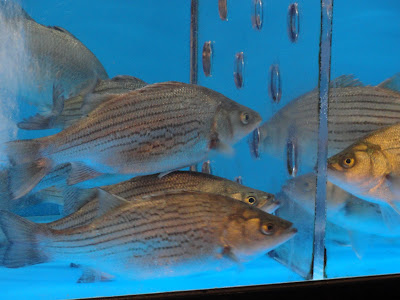 Last month, I sent Berkowitz a series of follow up questions about the blacklisted dinner and what has occurred during the past year. The following are those questions and answers, and I have not made any changes to his responses. Tomorrow, I will post my own thoughts on these answers and the impact of the blacklisted event.

1. As most of the controversy occurred prior to the dinner, do you have any regrets about how you presented the dinner initially to the media?
We weren’t trying to create controversy. The dinner was a private event for the Culinary Guild of New England. Their members are culinary professionals or people who have a strong interest in food who get together during the year for professional enrichment and networking. We were happy to oblige when they approached us to host an event…and our thought was to present a topic for discussion we’re passionate about and, of course, to serve some really great food and wine. It evolved into something much different than what was originally intended.

2. Do you regret using the term "blacklisted fish?"
Well…yes and no. I liked it because it’s very direct and gets to the point but, unfortunately, that term created an emotionally charged atmosphere surrounding an issue that, in fact, requires collaboration among stakeholders.

3. What did you learn, if anything, from that dinner and the surrounding controversy?
I learned that some people don’t know how little they know about the issue. It’s such a complex topic and we all have to better appreciate that it’s not so black and white. For example, those who believe that all farmed fish are bad or that fishermen are inherently anti-sustainability need to question their assumptions.

4. During the past year, what positive results, if any, have come about due to that dinner?
You know, it’s interesting…while not the original intention, I’m gratified that the dinner did raise public awareness of seafood sustainability. It got people talking and, through public discourse, I hope positive changes will come about.

5. During the past year, what negative results, if any, have come about due to that dinner?
I’m disappointed that some people allowed their passions to get in the way of rational debate, but sometimes that’s inevitable I guess. Ultimately, the important thing is that people care and that we all come to make more informed decisions on what we should and should not eat.

6. During the past year, has Legal Sea Foods changed any of its policies or procedures due to that dinner?
We’ve tried to enhance our staff training on sustainability and our company practices in this area. We’ve always wanted our servers to be as well-informed as possible on the food and drink we serve, but it’s an even greater area of focus now.

7. During the past year, has Legal Sea Foods either added or deleted any seafood from their menus because of changes in sustainability? If so, which seafood?
We only serve fish and shellfish that are within NOAA’s guidelines and, as such, are considered sustainable species by the federal government. But, beyond that, we continually monitor each species and make ethical decisions on whether or not we want to serve it. And we continue to work directly with fishermen to ensure that quality and freshness and harvest methods are up to our standards. We did add smelts to our menus this summer…it has great appeal crispy fried and it’s an under-utilized species.

8. Could you provide us an update on the status of the Vietnamese shrimp farms you use?
When I visited the farm in Vietnam last year, they had applied for ACC certification…and I’m happy to report that they have since received it.
(ACC=Aquaculture Certification Council, Inc.)

9. Could you provide us an update on the status of OAWRS? Have there been any additional studies? Has the government stepped forward to fund any additional research?
Accurate measurement is obviously fundamental to managing our stocks. But I’m just dumb-founded by how many people have no idea that the accuracy of current assessments has been called into serious question. OAWRS, using cutting-edge technology that would provide definitive data, is moving forward. It looks like funding is coming through from the state and there should be an announcement in a few weeks. I understand that they hope to conduct their first stock assessments in May/June on cod, a species whose viability is questioned by NOAA. At the end of the day, we all want to have confidence in the data so we can then make whatever accommodations are necessary to ensure the sustainability of the fish and fishing industry.
Posted by Richard Auffrey at 4:00 AM