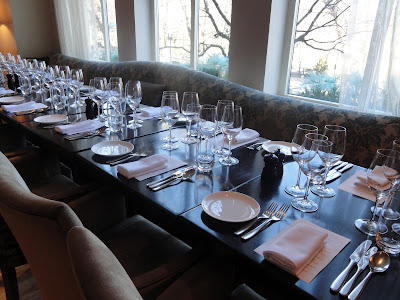 "A good Châteauneuf-du-Pape is first and foremost a wine-lover's wine."
--Eric Asimov, The New York Times

Last October, I attended a fascinating and delicious lunch at L'Espalier with the wines of Chateau La Nerthe, spawning my article Chateau La Nerthe: All About the Blends. In addition, that wine lunch became my 2011 Favorite Single Winery Tasting. This week, Chateau La Nerthe returned to Boston for a wine lunch at Bistro du Midi, and it too was a tasty and interesting event.

Bistro du Midi is a French Provençal restaurant on Boylston Street, and its second floor dining area is elegant without being pretentious, with large windows overlooking the city, an open kitchen visible through another window and even another window looking into a wine cellar. They served us a three-course lunch, and our first two courses are regular menu items and the cheese course is likely available as well. Though I attended a wine reception there before, this was the first time I actually dined there, and I was impressed enough that I will return. 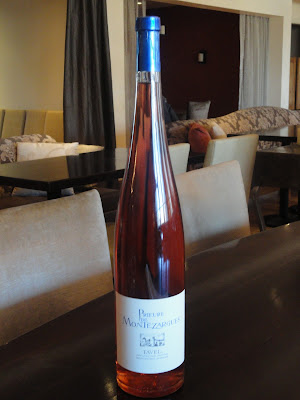 For some background information, history and tasting notes on Chateau La Nerthe, please consult my previous post, All About the Blends. We began our lunch with an apertif, a glass of the 2011 Prieure de Montezargues Tavel Rosé. As was their 2010 Rosé, this was a superb wine with plenty of complexity, and I could easily enjoy it year round. This wine was only bottled a few weeks ago so we were the first people in the U.S. to taste it. It possessed a paler pink color than last year's vintage though its flavors were very similar. It is available in this special magnum bottle, which has a long, extended neck. I give this wine my strongest recommendation and will be seeking it out myself as well. 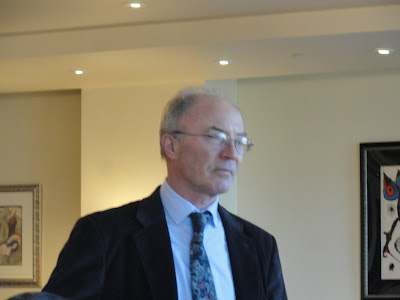 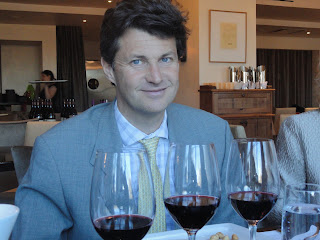 We also met Christophe Bristiel, the Export Manager for La Nerthe, who had also been present at the October event. Christophe is a charismatic and personable person, with an evident passion for wine. 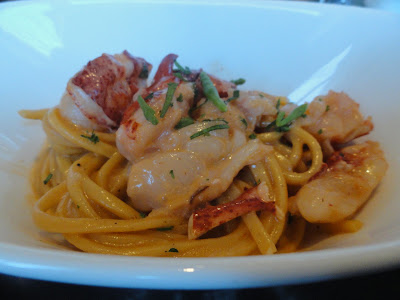 Our first course was Coral Infused Chitarra Pasta with Maine Lobster, Sea Beans, and Lobster Jus (which was about half the portion than you would receive at dinner). There was plenty of lobster in the dish, and overall this was a compelling plate. The pasta was cooked well, there was a richness to the jus and the flavors blended harmoniously. I could have easily devoured a few more plates of this pasta. And with the wines, it became an even greater dish, just a superb pairing.

With this pasta, we sampled the 2009 and 2010 Chateau La Nerthe Châteauneuf-du-Pape Blancs as well as the 2009 Chateau La Nerthe "Clos de Beauvenir" Châteauneuf-du-Pape Blanc (about $140-$150). The 2010 was exuberant in its aroma and flavors, while the 2009 was much more muted, having shut down to a degree. That is partially because 2009 was a warmer vintage while 2010 was an excellent vintage. The 2009 Clos de Beauvenir, of which only about 250 cases were produced, thoroughly impressed me once again. A sublime, albeit expensive, wine that is sure to please any wine geek.

The winery tends to harvest early, as they want to preserve freshness and fruit flavors, and are usually one of the first, if not the first, to harvest in the region. For example, during the last couple years, they harvested on August 20 and 24. In general, good white Châteauneuf-du-Pape tends to be very aromatic when young but after 2-5 years will experience a shut-down stage, which will also last for 2-5 years. After that, the wine will tender to emphasize its minerality. The winery tends to use higher percentages of Roussanne as it creates a more aromatic wine than will Grenache Blanc. Whatever they do certainly works well. 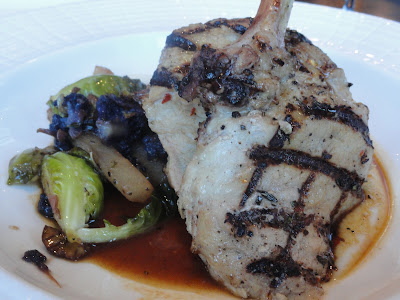 For our second course we were presented a Grilled Pork Chop with Sunchokes, Brussel Sprouts, Salsify, Chestnuts, Serrano Ham, and Pork Jus. Two large hunks of tender, flavorful meat satiated the carnivore within me and I was pleased to enjoy some red Châteauneuf-du-Pape with this pork.

We tasted the 2007 and 2008 Chateau La Nerthe Châteauneuf-du-Pape Rouges as well as the 2005 Chateau La Nerthe Cuvee des Cadettes Châteauneuf-du-Pape. Back in October, I got to taste older vintages, as far back as 1982, so it was interesting to taste their more current vintages of these wines. 2007 was supposed to be a great vintage while 2008 was a difficult one, with maybe the smallest yields of the last 25 years. Both wines were excellent though, albeit with their individual differences. The 2008 had more prominent fruit though the 2007 still had good fruit flavors. Neither was overly tannic, and both, to different degrees, possessed elements of minerality, spice and earthiness. They are excellent food wines, with a nice aging potential and worthy representatives of the quality that can be found in the Châteauneuf-du-Pape region.

The 2005 Cuvee des Cadettes was a superb wine, a perfect balance of elements with plenty of depth and complexity. It is a bolder wine than the prior vintages I have tasted, yet still elegant and refined, and should age wonderfully. This wine also deserves my strongest recommendation. 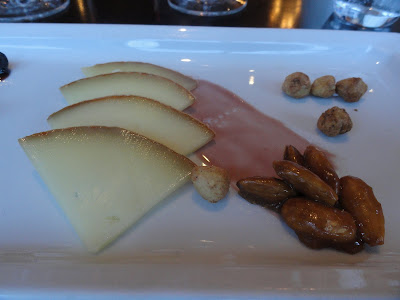 Our final course included Petite Basque Cheese with Candied Nuts & Maraschino Macerated Cherries. A beautiful cheese, and I am always pleased to enjoy a cheese course after a meal. But personally, I am not a huge fan of most red wines with cheese. Give me instead Sake, dry Sherry, or a Rosé. 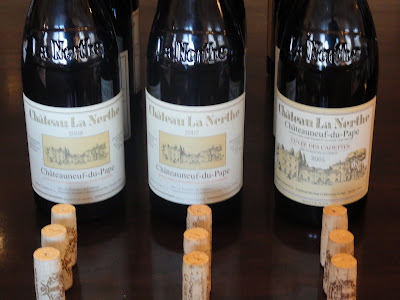 Our last two wines were from other properties in the Rhône owned by the Richard family, La Petite Fontaine and Domaine de la Renjarde. Though the La Nerthe wines tend to be pricier, these wineries produce more inexpensive, value wines.

The 2010 La Petite Fontaine Côtes du Rhône Rouge ($10-$15) is a blend of 60% Grenache Noir, 20% Syrah, 15% Cinsault and 5% Carignan. This is the first year that this wine is being produced. This was a simpler wine than the others we had tasted so far, yet still with its own allure. Dominant black fruit flavors with a spicy backbone, moderate tannins and a mild earthiness on the finish. A delicious, every day drinking wine, that would work with pasta to burgers.

The 2009 Domaine de la Renjarde "Massif d'Uchaux" Côtes du Rhône Villages ($15-$20) is a blend of 65% Grenache Noir, 17% Syrah, 11% Cinsault, 4% Carignan, and 4% Mourvedre. This wine had a bit more complexity than the Fontaine, again with dominant black fruit but a stronger spicy element as well as mild notes of vanilla and chocolate. Its tannins were a bit stronger, yet still far from overpowering, and its finish was lengthier. Again, this is a delicious, every day drinking wine yet with potential to age well. Both the Fontaine and Renjarde offer good values.

Chateau La Nerthe delivers once again, and I have even more respect for white Châteauneuf-du-Pape. Unfortunately, not much is produced in the region, though it can compete with the best white wines of any region.

This was my first experience of white Chateauneuf-du-Pape and i am an instant fan - I thought it was perfect with the pasta and especially liked the richness of the 2009.

Châteauneuf-du-Pape is indeed a wine worthy of study and time. Last Feb when in the Rhone we visited the ruins of the summer house and then the magnificent city of Avignon. Wine from this place has so many faces, cultures and influences involved it is a true wonder it became anything at all.

My tastings of the wines from the area included Châteauneuf-du-Pape, Gigondas, Vacqueyras and Cotes du Rhone, including Villages blends. I also found Provencal Rose and Muscat from Beaum-de-Venise at local markets during my stay. I taste wines from this region every time I find them available.

During my trip our host opened a late 90's white CDP. It had passed, but I was still fascinated by it, which in turn made my host smile.

The Marc from the area, brandy made from the grape pomace, will knock your socks off. Nothing better than sitting down to a cool Provence evening with a cigar and a couple bottles of that going around.

Great post. I actually have a bottle of white Chateauneuf-du-Pape waiting for me at home, though not from La Nerthe. I've not sipped any in years that I can recall. I'll have to get to it soon!

A day after your luncheon in Boston, my Facebook discussion group "Wine Aficionados" met with Messrs. Voeux et Bristiel in The Gate House, Fort Mason, San Francisco for a tasting seminar of the same wines, in the company of Pasternak Wine Imports, and their distributor, Epic Wines. I am collecting impressions from my group to post on my blog, VineBuzz.
May I contact you via e-mail?

Hi Rich,
Yes you can email me at ubarluther@aol.com

I love a bottle of Chateauneuf du Pape, it's a fantastic wine.