Turkey Shore Distilleries: Rum With A Sense of History 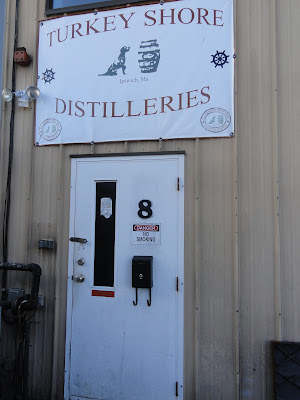 Could there be a historical connection between Privateer Rum and Turkey Shore Distilleries? Could the historic individuals, Andrew Cabot and John Heard, who inspired these new rum distilleries been involved together in privateering? This is a fascinating historical puzzle, one I would like to further explore in the near future. 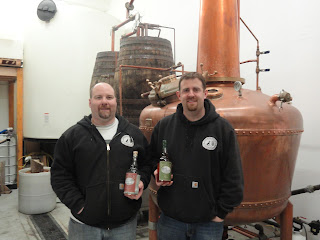 On the same day that I toured Privateer Rum, I also visited Turkey Shore Distilleries, another new rum distillery in Ipswich. Turkey Shore was founded in 2010 by two childhood friends, Evan Parker (pictured on the left) and Mat Perry (pictured on the right). Mat is a former high school history teacher and Evan, who works as their Master Distiller, is enamored with history as well. This strong passion for history is a primary component of their distillery, and touched upon my own love for history. While engaged in local research, they realized they had a personal connection to a rum distillery from colonial times.

Evan and Mat both grew up on Turkey Shore Road in Ipswich, which once was the site of a rum distillery. In 1765, William Story Sr. purchased a plot of land on Turkey Shore Road and soon after constructed a rum distillery. On May 1, 1770, William then sold the land and distillery, in equal shares, to his son, William Story, Jr. and John Heard, though sometime soon after, Heard would acquire full title to the  property and distillery, which would continue to operate until 1836.

Along the nearby Ipswich River, there was a wharf, once known as Dodge's Wharf though which later took on the name of Hunt's Wharf, which was a port for ships importing molasses and other goods. Hunt's Wharf was located in what is now Mat's back yard. The molasses would be unloaded from the ships and then rolled across the street to Heard's distillery. In addition, the distillery manager was Nathaniel Heard, who once lived in Mat’s house. Between 1795 and 1800, John Heard built himself a mansion, which still exists and is now a museum and the offices of the Ipswich Historical Society. In February 1818, John Heard transferred ownership of the distillery to his son, George Heard.

As I mentioned previously, Andrew Cabot once owned a rum distillery in Beverly, so it is likely his company was a competitor to John Heard's distillery in Ipswich. Being engaged in the same business, it seems likely they knew each other. What really intrigues me though is the question whether these two men had a privateering connection or not. During the Revolutionary War, Andrew Cabot became a privateer, plying the waters against the British while John Heard financed a number of privateers. Did Heard help to finance Cabot's privateering efforts? I don't know right now but it is worth some additional research. 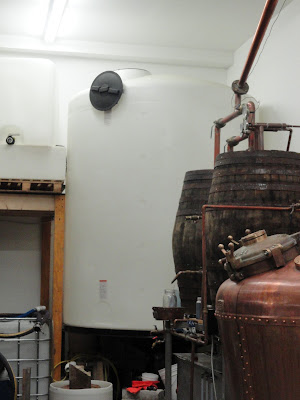 Mat and Evan desire to create affordable, artisan rum in an old New England style, and they did plenty of historical research on rum production, which is reflected in much they do. They also follow a compelling philosophy of using local when available, and then sourcing domestic as a back-up. About the only item they use which is not local or domestic are their bottles, which are produced in Germany.

Pictured above, the large white tank is for their molasses, which is table-grade rather than low quality blackstrap molasses. Pursuant to their philosophy, the molasses is not sourced from the Caribbean, but is more domestic, usually from Louisiana or sometimes Florida. 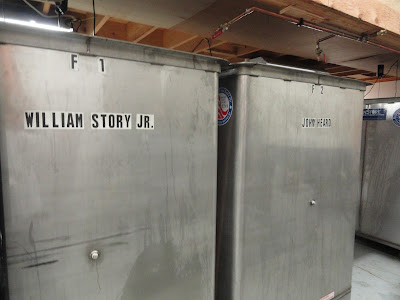 Turkey Shore has four 500 gallon, open top fermenters and each one is named after one of the original owners, John Heard and William Story Jr., and their sons. An open top fermenter is very traditional, and it is also supposed to be easier to use and easier to clean. Usually, they mix into the fermenter about 75-100 gallons of molasses with 400 gallons of water and this mixture ferments for about 12 days. That results in a "molasses beer" with an alcohol content of 9-12%. 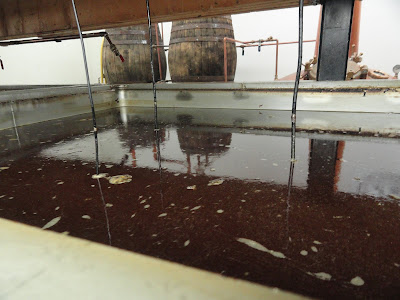 Above, you can see that "molasses beer" which has almost completed its fermentation. The picture also shows wires that sticking down into the mixture and they are used to provide heat to the interior of the fermenting liquid. That is necessary as they are using a Rhum Agricole-style yeast which requires the heat throughout the mixture, and without the wires extending through this large tank, the yeast might stall and prevent proper fermentation. 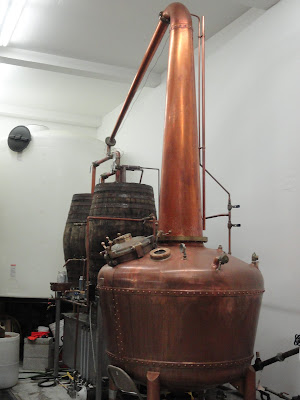 After more research into the type of rum they wished to produce, Mat and Evan had a 250-gallon copper pot  still custom-built by Vendome Copper & Brass Works in Kentucky. They use only a pot still, not column distillation, and there is no automation involved. Everything is assessed by taste and feel, providing a more artisan product. In addition, this is more of a traditional method, rather than the heavily automated processes found in some large, commercial distilleries. 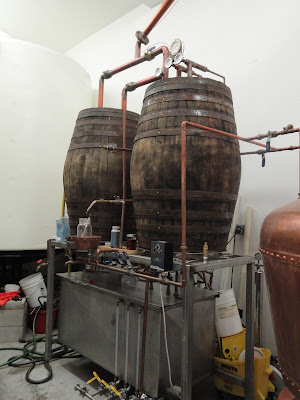 The two barrels, pictured above, have seen quite a journey, starting out in Spain where they were used to age sherry. In time, those barrels then traveled to Scotland, to be used for Macallan Scotch. Eventually, the barrels were transported to Massachusetts where they were first used by Samuel Adams Brewery and then by the Ipswich Ale Brewery.  Finally, they came to Turkey Shore Disillery, where they are primarily decorative, the housing for distilling equipment. But what a history those barrels possess.

The first barrel holds the condenser while the second barrel contains a retort, which allows them to distill to high alcohol while still retaining flavor. They normally conduct 3 distillations, including the stripping run, spirit run and then the retort. 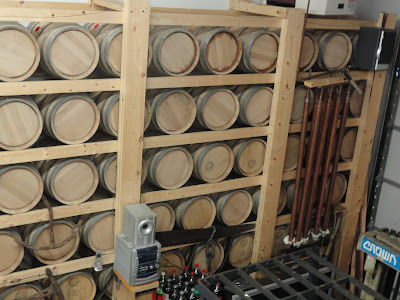 After distillation, their white rum gets blended with redistilled water to reduce it down to about 90 proof and then it is run through charcoal filters, those thin pipes on the right in the photo, to strip off its rough edges, the cheaper alcohols. Then, it can be bottled.

Their amber rum undergoes barrel aging in mostly new American oak, from northern Minnesota, with a medium char. They own about 100 barrels, using 15 gallon and 5 gallon casks, feeling that the smaller barrels give better oak notes in a shorter time period.  About 30 of their 15 gallon barrels are currently full of aging rum. Their 5 gallon casks are new and first use oak, and primarily used to produce special edition rums or be part of their consumer by the barrel program. The main problem with these 5 gallon barrels is that there is a greater amount of "angel's share," that amount of rum lost to evaporation during aging.

The amber rum is a blend, and they do all of their own blending rather than hiring an outside expert. This is another element of their artisan focus, doing as much in-house as possible. They feel that their amber rum drinks more like a whiskey with rum flavors. 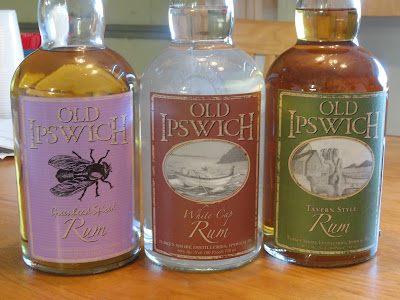 Turkey Shore currently produces two rums, a white and amber, respectively named Old Ipswich White Cap Rum and Old Ipswich Tavern Style Amber. In addition, probably in May, they will release a third product, a spiced rum called Old Ipswich Green Head Rum.They try to get local artists to design the paintings on their labels. Both their white and amber rums were originally designed to be used for mixing in cocktails, but they are also sippable on their own. Mat and Evan led me through a tasting of their three rums.

The Old Ipswich White Cap Rum ($21-$23) is named "for the tempestuous seas that define New England coastal living."  This white rum has a mellow aroma, subtle floral notes with touches of herbs. On the palate, it is relatively smooth, with a little bite on the finish, and mild flavors of vanilla and herbs. Though you could sip this on its own, my personal preference would be to mix it in a cocktail. It is far superior to many of the big commercial white rums out there, such as Bacardi.

The Old Ipswich Tavern Style Amber (about $26) spends about six months in a 15 gallon cask, and they wax dip the end of the bottle neck. I was really enamored with this rum, which had plenty of complexity and depth, and interesting flavors of vanilla, caramel, butterscotch, herbs and a subtle smoky aspect. It actually did remind me of a whiskey in some regards, and I would certainly drink this on its own rather than mix into a cocktail. The smaller casks seem to provide more depth to the rum, in a shorter time period, than does a larger cask as is used at Privateer Rum. This Tavern Style Amber is highly recommended.

In their researches, Mat and Evan found many historical recipes for spiced rums so they decided to produce some special editions of their own, using local ingredients as best as possible. Their Old Ipswich Green Head Rum (likely around $23-$25) is their first spiced rum and has been created with lemongrass, green tea, and spearmint. Its aroma is strong with the spearmint and on the palate it is very herbal, with a backbone of green tea, and presents a very unique taste. For my own personal tastes, I would not drink it on its own but it could form the basis for some interesting cocktails. I look forward though to future spiced rums they develop. 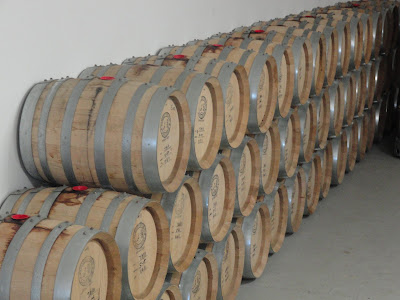 Currently, Turkey Shore has about 100-110 accounts, a rough 50/50 split between restaurants and wine/liquor stores, and mostly on the North Shore though they have started making some inroads into Boston. They recently partnered with Burke Distributing Corp., a full service beverage distributor, to spread their rums to Boston and southern Massachusetts, so you should soon start seeing their products in a number of local liquor stores and restaurants.

Turkey Shore is located next to the Ipswich Brewery, which will be moving in a few months and then Turkey Shore will expand into their space, giving them much more room. They also hope to partner with Ipswich Brewery to produce a whiskey, using grain grown within 5 miles of the distillery.  Ipswich Brewery owns some nearby farms, and they would supply the grain to Turkey Shore for the whiskey. Turkey Shore also plans to create some different styles of rum and well as more spiced rum.

Like Privateer Rum, Turkey Shore is still a new company, continuing to learn and refine their products, but has already done well and has much potential. Mat and Evan have a true passion and it can be infectious, and I love the fact that they have great respect for the history of rum, including local history. They produce a very artisan product, with primarily local and domestic ingredients, and that is very appealing. Their Tavern Style Amber is an excellent product and I strongly urge you to check it out. If you are in Ipswich, stop by for a tour and tasting. If not, look for their products at local restaurants and wine/liquor stores.
Posted by Richard Auffrey at 4:00 AM

Really you have done great job,There are may person searching about that now they will find enough resources by your post.I like this blog.
Logo Design

I found your article from a link at Turkey Shores' website. I thoroughly enjoyed reading it.

I found their Old Ipswich Tavern Style Rum at Atlas Liquors in Medford (who have a display calling out products from local distilleries). I loved it at first sip. Thank you for providing more background on the makers.